A Mike Davis style analysis of Cape Town, South Africa's most unequal city, from a libertarian perspective There are more photographs here.

Lead by the pugnacious Helen Zille, the Democratic Alliance is South Africa’s official opposition party and the governing party of the Western Cape, the only one of nine national provinces not under the control of the ruling ANC. Despite recent successes the party has failed to win substantial support among South Africa’s black majority, due to a widespread perception that notwithstanding its meretricious rhetoric of an ‘ Open Society’, the party remains a bastion of white privilege. Further scepticism has been created by the parties’ aggressively neoliberal policies which propose to reduce the country’s already partial post-apartheid social welfare system . However, the DA is hoping that the increasingly overt internecine fighting with the ANC will alter South Africa’s political landscape to give it a credible chance of becoming the ruling party by the end of the decade. With the ANC beset by corruption scandals, a growing intolerance for political dissent and the seeming inability to robustly tackle growing levels of social inequality, the DA is attempting to position itself as a pragmatic and efficient government in waiting.

Central to the strategy is the promotion of the City of Cape Town as an exemplar of good governance. The DA’s Cape Town manifesto promotes the city as beacon of ‘world class services, order and stability’ (and by extension paints ANC run urban areas as decrepit ‘feral cities’). Notably, in a country where inequality has sustained high levels of violent crime, the DA’s Cape Town model offers humanistic sounding injunctions about improving safety through reducing historical legacies of underdevelopment, poverty reduction and ‘’violence prevention through urban upgrading’’. The DA’s official line on urban safety promises to enrol ordinary people in the improvement of the city through social crime reduction strategies: as one memorable slogan in the recent local election campaign noted ‘’ a child in sport, is a child out of court’’. . Notably, the DA claims that its policies are linked by a concern for individual freedom and the limitation of abusive state power.

However, as the last few years have shown much of the self-proclaimed success of this model is in fact contingent on state violence and the perpetuation of a low level social war against the urban poor. Rather than an aberration this betrays a basal authoritarianism within the DA, which views the poor as targets for pacification, containment and ‘warehousing’.

Take for example the saga of the N2 Gateway housing project. In conjunction with the ANC led National government the city has attempted to move thousands of people from the city to Delft. Despite all the talk about meeting housing ‘’backlogs’’, most activists and researchers argue that the construction of ‘beautiful formal housing opportunities’ between the international airport and the city was a pretext for massive forced removals fast tracked ahead of the 2010 World Cup. Indeed, the quality of these housing opportunities was quickly revealed to people who had been moved from shack settlements into the two Temporary Relocation Areas (TRA) associated with the project. The DA managed Symphonthy Way TRA ( better know as Blikkiesdorp) greeted its new residents with government built corrugated iron shacks, barbed wired fencing, access control by the South African Police Service (SAPS) and regular patrols by apartheid era Casspier armed personal carriers.

The residents of the Symphony Way informal settlement were so unenamoured with the prospect of being forced into a glorified refugee camp that they occupied a nearby road in Delft for 21 months, the longest political action of its kind in South African history. And as the city was continually warned by residents this uprooting of communities has seen Blikkiesdorp invaded by gang related violence. With Blikkiesdorp as its premier dumping ground for unwanted and ‘risky’ populations, the ‘world class’ security of the city is often bought at the expense of creating insecurity on the periphery.

For example, immediately prior to the World Cup last year, hundreds of homeless people were evicted from the areas around the Greenpoint stadium to Blikkiesdorp, a sudden influx of people which seemed to bear all the hallmarks of an orchestrated clean up . The international media had a field day with this story, especially because of the camps disturbing similarities to the titular zone of exception in the film District 9. . However, the DA’s slick press cadres denied that there were any links between this and the upcoming World Cup. Indeed, when conducting research for my PhD, one City spokesperson even told me that they were not even aware of any controversy about the evictions. These denials looked slightly farcical in light of the cities public unveiling of its philanthropic sounding ‘ Winter Readiness Plan for street people’, which aimed to ‘’rehabilitate’’ its ‘’participants’’ by offering vaguely described ‘’activities ’’ which would keep them out of the city bowl. Coincidently, the plan was initiated a month before the World Cup and happened to fit exactly into FIFA imposed by-laws about restricting the visible presence of poverty within host cities. Most tellingly, the plan stressed the importance of ensuring that ‘’ our task is to get to people living on the streets before they acquire survival skills on the streets. Once a person survives a winter on the streets it is even more difficult to persuade him to consider getting back home." Using language that wouldn’t be out of place in the control of wild animals, the statement reveals much about the status of the down and out in the eyes of the Cape Town authorities.

The creation of a far flung prison camp, whose architecture serves as a weaponised form of containment is one thing, but the city considerably upped the ante with last years attempt to evict the residents of Hangberg. As gruellingly recorded in the Uprising of Hangberg documentary the police were clearly told to prepare for war: without provocation the SAPS opened fire with rubber bullets, destroyed homes, beat up schoolchildren. Several residents lost eyes. This shock and awe campaign was undergird by a sophisticated DA strategy of disinformation, in which the press was assured that the police were ‘liberating’ the area from ‘ drug dealers’ and falsely claimed that violence had been initiated by the community.

One of the most telling scenes in the film is Zille’s petulant response to the community’s anger about this officially legislated brutality. Surrounded by her police praetorian guard she storms off when the understandably furious community refuses to accept a pious lecture about their own best interests. Among activists Zille has become notorious for this kind of behaviour, with radical community groups who deviate from the official agenda set down in meetings accused of undermining ‘development’ through talking ‘politics’. As seen, in Hangberg, this rapidly transmutes into the vilification of protest as ‘criminal’. The DA script entails a division between the ‘deserving poor’ who want development and ‘troublemakers’ who make the cardinal sin of demanding to be engaged in the political process.

The violence at Hangberg was so extreme that containing the negative publicity proved a challenge even for the parties’ finely honed techniques of reality management. At a local election meeting this year I saw a normally slick councillor reduced to half-baked evasions when the issue was raised. After mumbling something about a ‘tragic misunderstanding’ his conclusion was ‘’ you know how the police get in these situations’’. While the level of state violence unleased was perhaps exceptional, this kind of militarised policing is not. As an aspirant ‘World City’, the DA has managed Cape Town by drawing on a transnational repertoire of what Stephen Graham calls the new military urbanism : ‘crowd control’ which aligns ‘non-lethal’ weaponry with hyper aggressive tactics and campaigns of media dissemination. While this initially tested on groups which the state considers marginal it may quickly become the norm. Indeed, the party’s official security policy reveals an eagerness to rollout such ‘first world security measures’ if in power, from mandatory prison labour to the pre-emptive identification and tracking of ‘potential’ criminals. To this end, Cape Town’s central business district (CBD) has seen the establishment of a CCTV network of Orwellian proportions whose surveillance footprint far exceeds any other city in the country. However, this funnelling of resources into the CBD stands in strong contrast to the epidemic violence in the sprawling Cape Flats to the south east, in which children have exhibited signs of post-traumatic stress comparable to a warzone.

As the party supporters are quick to point out, ANC dominated councils in other cities have engaged in similar actions, from orchestrated attack on the shack-dwellers' movement, Abahlali base Mjondolo in 2009 to last year's dramatic upsurge in recorded cases of police brutality. Indeed, it can be argued that this is a problem which transcends parties as urban authorities’ efforts to create sanitised world class cities fuses with historical legacies of authoritarianism. Despite the troubling developments, post-apartheid South Africa has a vibrant civil society which continually exposes and challenges these abuses. However, the nature of our recent past means that ordinary South Africans must be continually vigilant about the application of state power, especially when this is glossed in a packaged coat of ‘’international best practise’’.

Thus, despite the service it pays to liberal platitudes about an open society, the DA’s approach to Cape Towns ‘peripheral’ areas and populations appears to replicate a governmental strategy of disgusting inequality by force and lashing out at society’s most vulnerable. As Jean Pierre de La Porte has put it, the DA’s Cape Town model is divided into a Manichean “world of orderly haves and embarrassing have-nots, mocking the weak has become acceptable, since their own failure to be prudent and follow the rules has brought their every misfortune upon themselves – the vulnerable are dunces’’. Under Zille’s botox hardened smile lies a ready resort to the fists of iron which fortify this divide.

Yesterday more than forty people were arrested in a major police operation to prevent the occupation of the Rondebosch Common in an elite suburb of Cape Town - the most unequal city in South Africa, which has now surpassed Brazil as the most unequal country in the world.

On the politics of protest in Cape Town

Jared Sacks on popular protest, disruption, and violence in South Africa in the wake of the Lonmin Massacre.

Mzonke Poni, Chairperson of Abahlali baseMjondolo of the Western Cape, is scheduled to stand trial on the charge of public violence on Tuesday 29 September 2009.
Image 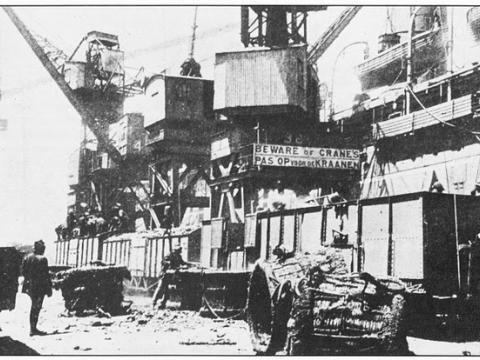