This month we celebrate the Discovery of Puerto Rico on November 17. It is important to celebrate not only our culture, music and food, but also to remember those who came before us, without whom we might not be where we are. Among those historical figures is a Puerto Rican woman who could very well have lived in modern times. Her name is Luisa Capetillo.

Capetillo was a free thinker, a feminist, an anarchist and a labor leader in the early 1900′s. Although she is best known today for being the first woman to wear pants in public in Puerto Rico, her struggles as a leader in the emerging labor movement and in a male dominated society made her a woman who was far ahead of her time.

In the early part of the 19th Century, slavery and feudalism slowed the growth of a working class in Puerto Rico. Few paid laborers existed, and they were isolated and spread out across the country, making it difficult to realize and express their common interests.

The fall of the monarchy of Isabel II of Spain spurred economic and civil changes, which allowed for the growth of a working class in Puerto Rico. Among these changes was the abolition of slavery and feudal servitude. In addition, the growth of large centers for the production of sugar cane and tobacco for exportation made conditions fertile for workers to express their common interests and issues. Between 1868 and 1873, civil decrees allowed limited suffrage and free association. It is within the context of these changes that the first worker organizations were formed.

At first, workers formed social clubs, called casinos, which also evolved into having educational functions as well. Workers who attended the casinos danced and socialized, but also enjoyed literary readings and theatrical presentations. Later, these organizations formed “help your own” funds to aid workers who became sick or incapacitated. However, these organizations didn’t deal with the problem of unemployment, so worker cooperatives were formed to retrain workers in certain skilled trades.

Although the Spanish government did not consider these groups a threat, in 1879 they prohibited the formation of organizations for the purposes of “raising or cheapening the price of work” or to regulate its conditions. Workers were also held back politically because voting in local elections was limited to those who paid property or business taxes. This changed in 1898 on the eve of the U.S. invasion of Puerto Rico when a law was passed to allow men from the age of 25 to vote.

The U.S. invasion of Puerto Rico and the subsequent changes that came with it may have accelerated the formation of labor unions. It was during this time that Luisa Capetillo made her debut in the union movement.

Capetillo’s parents shared the same philosophical and political ideology. They lived together and raised Luisa, their only child, but never married. Capetillo was educated at home where she received a more liberal education than what young women could expect at that time. Both her parents encouraged open and free debate on many issues which opened her mind to different ideas and philosophies. She adopted an anarchist philosophy and it was those ideals that she lived by. She was baptized a Catholic, but rejected religion. However, she was not an atheist. She, unlike other anarchists, considered herself a good Christian, although she did not agree with the rigid dogmas and rituals of the church. She insisted instead that true Christianity was to be found in the eradication of oppression and exploitation. To be a Christian meant that one believed in justice and equality.

At the age of 19, she met and fell in love with Manuel Ledesma, a young man from a prominent family in Arecibo. They became lovers, and in 1898 their first child, Manuela, was born. Two years later their son Gregorio was born. Luisa and Manuel never married, and after three years their love affair ended.

Now a single mother, Capetillo left her children in the care of her mother and took a job in the textile industry. Subsequently, she became a reader in the tobacco factories in Arecibo. A reader sat or stood at a podium on the factory floor and read aloud so that the workers who stemmed the tobacco leaves and rolled the cigars could hear. Often, certain passages of particular literary works or political essays would be repeated several times so that workers could commit them to memory. It was also tradition in the tobacco factories to have open discussions and debate on particular lectures without interrupting the work. Workers also debated and voted on which works would be read each day.

The first union, La Federacion Regional de Trabajadores (The Regional Federation of Workers), was formed during the military occupation by the United States in 1898. The eight-hour work day was ordered by military decree in 1899, and the prohibition against unions imposed under Spanish rule was abolished. However, because of ideological differences, a group of members broke away and formed the FLT – Federacion Libre de Trabajadores (the Free Federation of Workers) which, through the efforts of Santiago Iglesias Pantin, subsequently affiliated with the American Federation of Labor.

Capetillo’s involvement in the union began in 1905 during a farm workers’ strike led by the FLT. Because of her previous collaborations with radical and union newspapers in Arecibo, she was able to write propaganda and organize workers in the strike. She played a prominent role in the strike, and she quickly became a leader in the union. She made her living from selling the union newspaper as she traveled throughout Puerto Rico educating and organizing workers. Her message was simple – workers must unite under one banner in order to defend their rights for dignity and equality. She was such an effective organizer that her hometown of Arecibo became the most unionized area in the country.

Capetillo is considered by many to be the first true suffragist in Puerto Rico. In 1908, she urged the FLT, at their convention, to adopt a policy to fight for women’s suffrage. She insisted that all women, not just the rich or literate, should have the same right to vote as men.

In 1909, the FLT embarked on an ambitious organizing campaign which they called “la Cruzada del Ideal” (Crusade of the Ideal). Under the auspices of the FLT, Capetillo, along with rank and file workers and union leaders, traveled on foot, by horseback and by train across Puerto Rico to organize and educate workers. During this crusade, Capetillo wrote for the union newspaper, Union Obrera, and published her own periodical entitled La Mujer. She also wrote and published a collection of essays entitled Ensayos Libertarios.

Luisa Capetillo was the first Puerto Rican woman to commit to writing her feminist ideas and theories on the rights of women. In 1909, Luisa wrote and published Mi opinion sobre las libertades, derechos y deberes de la mujer (My opinion about the liberties, rights and responsibilities of women) which is the first feminist thesis written in Puerto Rico. Although she considered herself a feminist, she did not join any of the feminist organizations that emerged during that time. She instead dedicated all her efforts to the labor movement, believing that the union was the vehicle for poor working women to obtain justice and equality. She wore pants in public, challenging the social mores of the time. She advocated for free and liberal education for all men and women. Perhaps one of her most controversial ideas was “free love,” which many misinterpreted as encouraging promiscuity. In her essays she explains that women should choose whom they will love freely, without legal interference or matrimony. In 1911, Capetillo gave birth to her third child, Luis Capetillo. She published the first edition of her book entitled Mi Opinion.

In 1912, Capetillo traveled to New York City where she established ties within the Cuban and Puerto Rican tobacco workers. She wrote for various radical and anarchist papers. A year later she moved to Tampa, Florida where she worked as a reader in one of the tobacco factories. During her stay, she published the second edition of Mi Opinion. The next stop in her travels was Cuba where she joined the sugar cane workers in their strike which was organized by la Federacion Anarquista (the Anarchist Federation of Cuba). She circulated a manifesto which advocated violence and was ordered to leave the county. She was later arrested for “causing a public disturbance” by wearing men’s clothes in public. She challenged the court, arguing that there was no such law that prohibited her from wearing men’s clothing. The judge agreed, and the charges were dropped. News of this episode was published in all the major newspapers in Cuba and Puerto Rico. She returned to Puerto Rico where she organized and participated in several strikes, including the Sugar Cane Strike of 1916. Over 40,000 workers in 32 municipalities participated in this strike which resulted in an average salary increase of 13%. The period of 1916-1918 was the most intense in terms of strike activity in Puerto Rico’s history. During this period Luisa traveled back and forth to New York City where she had established a guest house and cafe. She also traveled to the Dominican Republic in support of striking workers in 1919.

Luisa Capetillo was overcome by tuberculosis and died on October 10, 1922. From all accounts, she lived intensely – almost until the moment of her death she fought for workers causes and the emancipation of women. It is difficult to measure the impact that Capetillo had on the labor movement or the feminist movement. Most historical documents don¹t even mention her. One thing we do know for sure – she lived life on her own terms, defending her right to be free. Her story, I hope, inspires us to do the same.

Taken from The Lucy Parsons Project

cheers for posting this stuff!

I have added the tag "biographies" to this, and changed the format of the article name so that this will show up in alphabetical order on our biographies page:
http://libcom.org/history/biographies

Puerto Rico was invaded on Nov 19, not Nov 17. Are we missing something? Please, correct. 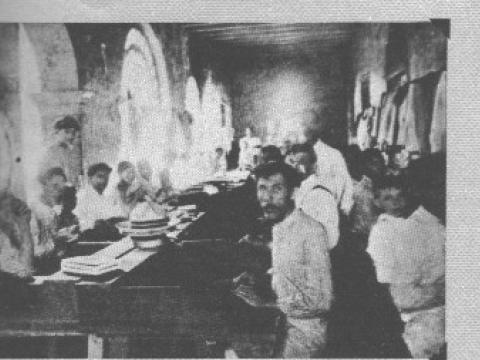 Description of some of the conditions Puerto Rican cigar makers worked under. 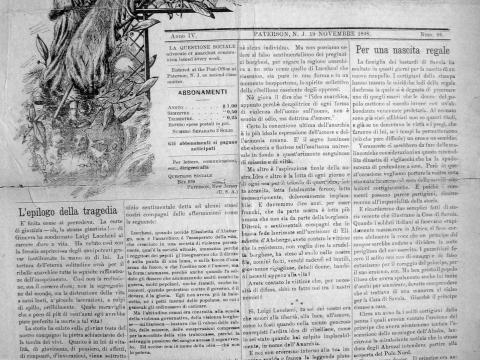 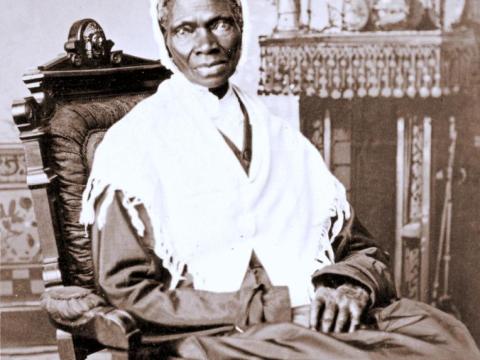 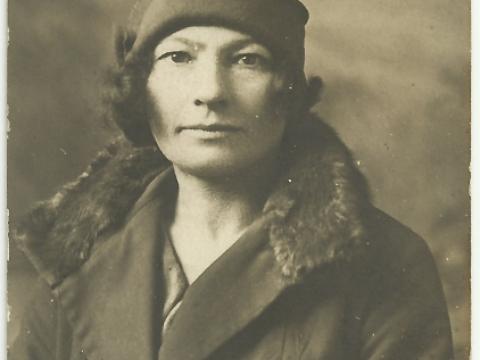