Capitalist Democracy: The Illusion of Choice

Supporters of capitalist democracy generally claim that it is the best—if not the only—way of organising a free society. Capitalist democracy provides the conditions, they claim, under which each of us can determine the course of our own destiny and enjoy all the benefits in terms of creative autonomy and individual self-development that accrue to a truly free people.

They say that freedom is something we enjoy as a result of choosing those political representatives whose policies best reflect the dictates of our own conscience to make laws on our behalf. We achieve the common good, they say, by compelling all to respect the laws, which are applied equally to all without fear or favour.

These claims are myths. The fact that many of us commonly confuse these myths with facts changes nothing, since the truth of an idea is not determined by the number of people who believe it.

1. Capitalist society is class society. Despite the claims made by the most powerful people in our society—who, we might add, have vested interests in doing so—the unity of the nation-state is an illusory one, because capitalist society is divided into economic classes. On the one hand we have those who own and control social resources, and who enjoy the economic and social privileges that accompanies such ownership and control, and on the other those who lack such ownership and control and are obliged by the circumstances of their birth to sell their labour for a wage, which is generally most of us.

But it gets worse. The capitalist class generates profits from the wage system by paying workers less in wages than the value of the product of our labour, which they take for themselves. This is exploitation, period, and any sort of exploitation is inconceivable in a free society, because as long as one person can be exploited none of us are free. The only difference between chattel slaves and wage workers is that the former were owned, whereas the latter are rented. Seen in the cold hard light of day, wage labour is really wage-slavery.

Suffice it to say that the economic and social privileges that the propertied classes enjoy in our society depends for their existence on the denial of elementary human rights to the vast majority of society.

3. The exploitation inherent to capitalist society is protected by the state. The denial of the basic human right of economic independence to the working class is protected by the institutionalied violence of the state, by the police, military and judiciary. The primary function of the state is to protect and defend the social and economic privileges of the propertied classes. It is an institution of class domination which lords over the whole of society and imposes economic dependence and servitude on the great mass of humanity in the service of an opulent minority.

(Some will argue in the defense of the state that it 1) maintains order and 2) protects us from violent crime. To this we pose the counter-arguments as follows: 1) what sort of order and in whose interests, and 2) that being 'protected' against 'crime' by the state is like being 'protected' against 'crime' by the mafia, and that as the state bequeaths its 'protection' to the working classes, facilitating the theft of the wealth it produces, so too does it perpetuate crime in the name of stopping it. Since the system of deterrence has failed to stop violent crime, we suggest alternative strategies such as addressing the causes).

4. The primary function of the state as a defender of privilege and injustice is reflected in capitalist law. The character of the state as an institution of class domination and the nature of its basic function (to protect the privileges of the propertied classes from the rest of us) forms the basis of capitalist law. The golden rule is that those with the gold make the rules. The basic fraud behind the doctrine of equality before the law, the foundation for capitalist democracy, derives then from the fact that the laws are made by and for the rich.

The fact then that, in applying the same law to all, capitalist law has overcome the arbitrariness of kingly despotism is ultimately irrelevant for those of us in a state of economic servitude, since the law itself is unjust; being grounded as it is in the protection of elite privilege and the perpetuation of the master-slave relationship at the core of the wage system, it perpetuates the arbitrary rule—the despotism—of a class.

5. Capitalist democracy operates within the paradigm of capitalist law and underwrites its injustices. When we go to the voting booth at election time we choose between candidates from within an ideological spectrum that takes the legitimacy of class rule and wage-slavery as a given. No discussion may be entered into on the subject—all sides, whether left or right, agree that the propertied class may exploit the working class and that the master-slave relationship that characterises the wage system is proper and just.

Considering all of the above facts, it is impossible to make any conclusion other than that in providing us with candidates who are essentially the same insofar as they share a consensus regarding the legitimacy of wage-slavery, capitalist democracy provides us with false choices, and thus the illusion of choice, and thus the illusion of freedom. It is only possible to conclude that the regime of capitalist democracy and its two-party circus act where we vote for Tweedledum's stick when we get sick of voting for Tweedledee's carrot and vice versa, signifies the permanent deferral of meaningful freedom for anyone who isn't a beneficiary of exploited labour.

Capitalist democracy will always disappoint because it is of, by and for the ruling class. We must learn to take responsibility for our own freedom and let go of our childish faith in leaders and in being told how to think and act. We must learn to think and act for ourselves individually as well as socially. We must create the facts of a better future in the here and now through community and workplace organising on a cooperative and non-heirarchical basis, in such a way that connects our goal of meaningful freedom with the means that we use to achieve it. Only in this way do we have any hope of overcoming the injustices of capitalist democracy and creating a brighter future for everyone.

I agree with absolutely everything in this article, and my question to you is: How do we change it?

How do we change capitalist society Debbie? We don't. We get rid of it through revolution. How do we do that? The working class, currently submissive and rendered impotent by bourgeois democratic ideology which makes of it individualised and vacuous citizens, making electoral choices between things which are all the same, has to wake up, rediscover solidarity and class consciousness and march forward to victory.

How do we do that do you ask? I don't know. We tried once and failed. But if we don't try again and succeed the outlook for humanity and life on the planet is poor to disastrous.

We have to learn to think for ourselves, as the article above says, realise our common interests as the workers of the world in securing our freedom. We must see through and reject the phony crap which encourages us to go on being isolated citizens and members of bourgeois democracy, and start to see ourselves as workers again and work together as a class.

If we all stopped work for a week this shitty society would crumble. If we had sufficient class consciousness, and if we seized power, we could then start building the new libertarian communist society. It's simple!

Can anyone guide me to any leaflets for me to use for fending off the pro voting brigade that are putting me, the token anarchist, under siege at the moment?

Webby,
Have you seen the latest AF special edition of 'Resistance' headed 'Angry Not Apathetic' available on their website at www.afed.org.uk which is quite good on the anarchist-communist perspective.

A good read that. The bit about Brand was good. I've actually developed a bit of a soft spot for him and certainly don't feel I have to 'stomach' him. I agree with the Afed piece that his solutions are shit but I think his analysis of how things currently work are pretty good and there are a lot of people watching, so...

The suffragette bit will be real useful for my daughter who is a hardcore liberal that's losing faith. She's decided not to vote and I think is slowly coming away from liberal thinking to a more revolutionary POV. Let's hope eh?

Could still do with something with more brevity, that would print clearly on A6 or A5 if necessary. I've actually written one in my head using an analogy with Marzipan! Yep you read it right. Being apathetic though, I'll probably never actually get it written properly!

Thanks again for the link. 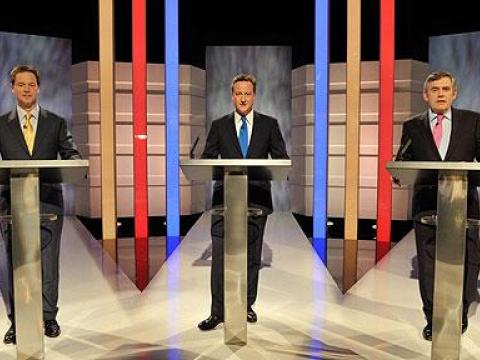 "You mean they actually vote for the lizards?" - Junge Linke

Junge Linke on elections, democracy and the state under capitalism. 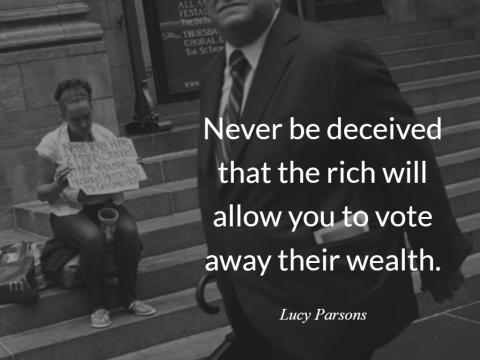 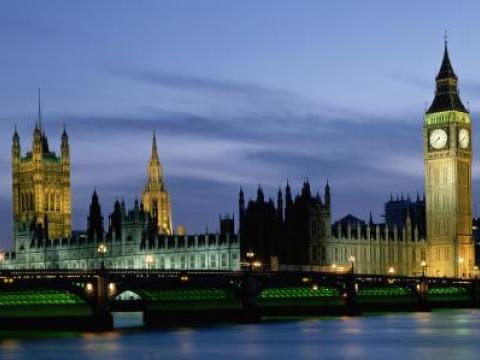 A brief look at British parliamentary democracy, and how it is rigged from a grass roots level.