They are demanding the government help out struggling workers and that their employer, Republic Windows, award the workers a severance package as well as compensating them for unused vacation hours.

Workers who got three days notice that their factory was shutting its doors have occupied the building and say they won't go home without assurances they'll get severance and vacation pay.

About 250 union workers occupied the Republic Windows and Doors plant in shifts Saturday while union leaders outside criticized a Wall Street bailout they say is leaving laborers behind.

Leah Fried, an organizer with the United Electrical Workers, said the Chicago-based vinyl window manufacturer failed to give 60 days' notice required by law before shutting down.

During the two-day peaceful takeover, workers have been shoveling snow and cleaning the building, Fried said.

"We're doing something we haven't done since the 1930s, so we're trying to make it work," she said, referring to a tactic most famously used in 1936-37 by General Motors factory workers in Flint, Mich., to help unionize the U.S. auto industry.

Fried said the company can't pay its 300 employees because its creditor, Charlotte, N.C.-based Bank of America, won't let them. Crain's Chicago Business reported that Republic Windows' monthly sales had fallen to $2.9 million from $4 million during the past month. In a memo to the union, obtained by the business journal, Republic CEO Rich Gillman said the company had "no choice but to shut our doors."

Bank of America received $25 billion from the government's financial bailout package. The company said in a statement Saturday that it isn't responsible for Republic's financial obligations to its employees.

Outside the plant, protesters wore stickers and carried signs that said, "You got bailed out, we got sold out."

The Chicago-based Rainbow PUSH Coalition, a civil rights group, announced in a news release Saturday that Jesse Jackson planned to visit the workers Sunday morning to offer his support.

Larry Spivack, regional director for American Federation of State, County and Municipal Employees, Council 31, said the peaceful action will add to Chicago's rich history in the labor movement, which includes the 1886 Haymarket affair, when Chicago laborers and anarchists gathering in a square on the city's west side drew national attention after an unidentified person threw a bomb at police.

"The history of workers is built on issues like this here today," Spivack said.

Representatives of Republic Windows did not immediately respond Saturday to calls and e-mails seeking comment.

Police spokeswoman Laura Kubiak said authorities were aware of the situation and officers were patrolling the area.

Workers were angered when company officials didn't show up for a meeting Friday that had been arranged by U.S. Rep. Luis Gutierrez, a Chicago Democrat, Fried said. Union officials said another meeting with the company is scheduled for Monday afternoon.

"We're going to stay here until we win justice," said Blanca Funes, 55, of Chicago, after occupying the building for several hours. Speaking in Spanish, Funes said she fears losing her home without the wages she feels she's owed. A 13-year employee of Republic, she estimated her family can make do for three months without her paycheck. Most of the factory's workers are Hispanic.

An acct from a Wob who attended a support rally:

I just got back from a Labor rally at Republic Windows, a factory located on Goose Island, which is a designated Manufacturing District in the City of Chicago, Illinois. There were approximately 200 Union people attending the rally, including 5 Wobblies, along with U.S. Representative Luis Gutierrrez, and the media, including Labor Beat (a Wob Member), all the Chicago TV stations, and probably Chicagoindymedia , Chicago Public Radio as well, can't confirm the last two.

The workers in the factory are members of UE Local 1110. The factory shut down at 10:00 am Friday. There was no advanced notice to the workers. They have been denied vacation pay and severance pay, which under Illinois law is 75 days in a union shop. The workers refused to leave. They are currently occuping the factory. Apperently, BOA (Bank of America) wouldn't give Republic a Line of Credit to continue operations.

At the rally, representatives from Jobs With Justice, Interfaith Worker Justice (which co-ordinated the event), SEIU, Teamsters (the radical local), and US Rep Gutierezz spoke. Most of them had pretty good things to say. Basically, Wall St has been Bailed Out, where's the bailout for Workers?

Illinois Rep Luis Gutierrezz threw his support behind the Republic Workers.
He babbled on a bit, as is his nature. He is brokering a deal to meet with UE, BOA , and Republic Monday. The deal is: get the workers their severance and Holiday pay. If the deal falls out, UE will picket BOA HQ at 135 S La Salle St. at Noon on Tuesday.

The speechifiers were rounded out by Carl Rosen, President of the UE Western Region, (also the Chicago IWW GMB's Landlord). But then, the crowd was startled to notice someone had jumped up on a portable dock-stand just south of the Factory entrance. This was none other than FW *******, who Orated in the IWW Soapbox Tradition, exhorting the Workers to Rise Up and Fight! Carl rolled his eyes: “it's all about free speech.”

FW ****** then led the crowd in a rousing rendition of 'Solidarity Forever.'

People at the Rally donated to a fund for the fired workers. Also, people are working to make sure the workers occupying the factory have food and water. The factory temperature is at 50 degrees farhenheit.

It is a cold, snowy day here in Chicago. I thought the turn-out was pretty good given the weather. There wasn't enough advance notice to get more Wobs out there. I think UE handled this brilliantly. They got the Media to show up, and other Union reps as well.

Fellow Workers, we are entering an economic crisis unseen since the Great Depression. By the middle of next year, workers in the US (and the World) will be experiencing massive unemployment.

The Republic Windows occupation could be a blue-print for workers taking
control of factories. It happened in Argentina. Unfortunately, in this country,
there has been a massive anti-union propaganda camapaign for the past 25 years.

However, things are getting so bad in the US now that I think workers are
getting radicalized.

After the conclusion of negotiations Wednesday evening, the membership of Local 1110, more than 200 workers, met in the plant cafeteria to hear and consider the tentative settlement that had been worked out by UE negotiators over the past three days.

The settlement was approved by a unanimous vote.
'Justice - We Did It!'

Following the vote, the UE members, led by Local President Armando Robles, marched out of the plant, chanting “We did it!” in English and Spanish.

Pres. Robles stepped to the microphones outside the front entrance to the plant, where a throng of reporters and cameras had been waiting. He announced the end of the occupation and said that justice had been achieved.

UE Western Region President Carl Rosen then described the negotiations, summarized the settlement agreement, and commented on the significance of the struggle and the achievement.
Pay, Health Care, Vacation Pay

The settlement totals $1.75million. It will provide the workers with:

* eight weeks of pay they are owed under the federal WARN Act;
* provided with two months of continued health coverage, and;
* pay for all accrued and unused vacation.

JPMorgan Chase will provide $400,000 of the settlement, with the balance coming from Bank of America
Third Party Fund

Although the money will be provided as a loan to Republic Windows and Doors, it will go directly into a third-party fund whose sole purpose is to pay the workers what is owed them.

As the Local 1110 leaders characterized the settlement, “We fought to make them pay what they owe us, and we won.”
'Historic Victory'

UE Director of Organization Bob Kingsley spoke on behalf of the National Union, describing the outcome of the occupation as “a victory for workers everywhere,” and as “an historic victory for America’s labor movement.”

Kingsley went on to call the settlement “a win for all working men and women who face uncertainty, unfairness and job loss in a troubled economy.”
'The Window of Opportunity' Foundation

Kingsley then announced the creation of a new foundation, dedicated to reopening the plant. It will be initiated with seed money from the UE national union and the thousands of dollars of donations to the UE Local 1110 Solidarity Fund that have come in from across the country and around the world in just the past five days.

Melvin Maclin of Local 1110 announced the name of the foundation, which was chosen by the workers themselves: the Window of Opportunity Fund. Maclin said that the fund will be open to receive donations from all friends of the Republic workers and supporters of their struggle.

Rosen introduced U.S. Rep. Luis Gutierrez, praising the congressman for his tireless work in behalf of the Republic workers and indispensible role in bringing about the settlement. Gutierrez spoke at some length, and then introduced David Rudis, Illinois State President, Bank of America. 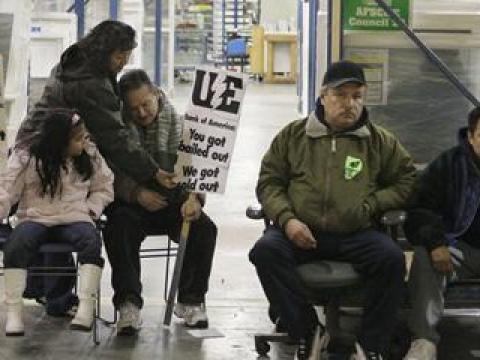 An account of the December 2008 occupation of Republic Windows & Doors in Chicago. 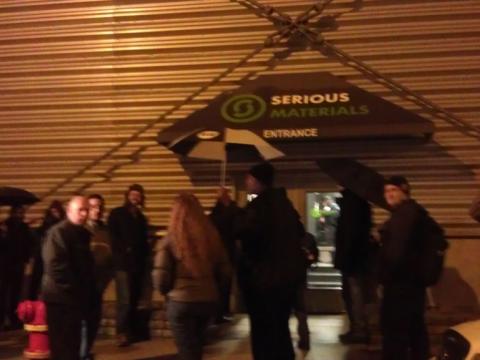 News, Twitter and on-the-ground updates from the occupation of Serious Materials in Chicago. 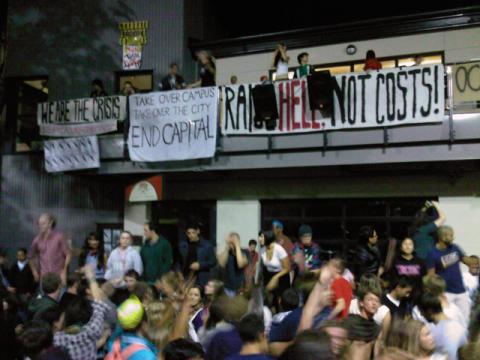 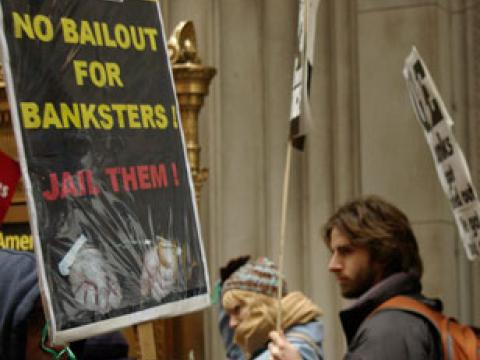