DEMOCRACIA Exposes the ‘Socialism’ of Social-Imperialism

An article on the meaning of socialism from Abyot, information bulletin of the Foreign Committee of the Ethiopian Peoples’ Revolutionary Party, that in turn translates and summarizes an article from the EPRP’s clandestine journal Democracia. This article appears in the Feb.–March 1979 issue (Vol. 4, No. 2) of Abyot.

In its Volume 5, No. 4 issue, Democracia, organ of the EPRP, exposes the ‘socialism’ of social-imperialism.

For the broad masses, says Democracia, there is no socialism without democracy and there is no democracy without socialism. Democracy is necessary and useful for the construction of a socialist society. However, social-imperialists and revisionists, presenting themselves as examples are trying to show that ‘socialist construction’ is possible with the absence of any sort of democratic and human rights. That is not all. They have gone to the extent of trying to show how “socialism” can be built under fascism. Exposing their true colours, however, they have shown that democratic and human rights erode socialism, and that socialism and democracy are mutually exclusive.

EPRP’s position, continues Democracia, on the relation between socialism and democracy is diametrically opposed to the position of the social-imperialists and revisionists. At a time when all sorts of anti-socialists are professing about socialism, we have found it necessary to explain in short the principal charateristics which scientific socialism differs from all the ‘socialisms’ of the anti-socialists.

Thus continues Democracia, the first socialist country has been turned to be a social-imperialist country. As a bad example and through its practices, policies and influence it has and is still challenging, opposing and fighting against the purity, expansion, development and triumph of socialism. Putting the parties in Eastern Europe, Cuba, Mongolia and Vietnam, who are in power, under control; the Soviet Union has also had these parties establish an anti-democratic and anti-people rule.

The dictatorial rulers of the Soviet Union, says Democracia, have and are still attempting to present the rules of their anti-people and anti-socialist puppets in a number of countries as ‘socialist’. In contradistinction to the struggle of the masses for democracy and socialism, the Soviet rulers have presented the anti-people rule of their puppets as ‘socialist’ in an attempt to prolong the life of the reactionary system and destroy the peoples’ resistance. Hasn’t the demagogue Mengistu’s fascist regime calling itself ‘socialist’ also called the proletariat, broad masses and the proletarian party counterrevolutionaries?

For the social-imperialists and fascists, continues Democracia, socialism means a system of which a regime of handful few dictators has the control of the masses and when the people do not have any control of the government. For them, socialism is being against democracy, anti-proletarian, anti-people and which combines the reactionary superstructure and practices which enables them to maintain their fascist and exploitative rule. The difference between the socialism we are fighting for and the ‘socialism’ of the social-imperialists and fascists is as wide as heaven and earth. To us socialism is a system in which the proletariat and broad masses hold state power; in which they take part in all responsible positions, in which the right of the people to call or change the officials of the government elected locally or at a country-wide level is guaranteed, in which there is a proletarian- led regime that stood for the broad masses of the people.

For the social-imperialists and fascists, ‘socialism’ means depriving the proletariat and broad masses of the people their democratic and human rights; depriving them the right to free speech, press and assembly; and depriving them the freedom of movement in their own country. ‘Socialism’ for the social-imperialists and fascists is a system in which the masses are subjected to constant repression, harassment, torture and execution until they bow to silence. For us, socialism is the exact opposite of this. Socialism without democracy is unthinkable. Socialist democracy is different from and superior to bourgeois democracy both in breadth and form. Socialism is not only a system in which the proletariat and broad masses have the right to free speech, press and assembly and organization; but also the right to sound out their opinions or protests against their regime or any organization without restrictions. Under socialism the masses also have the right to take a different position and make it public, the right to protest. Socialism cannot be a system in which a democracy narrower than bourgeois democracy reigns.

A system in which the proletariat and broad masses do not directly take part in the excercise of power, says Democracia, cannot be socialist. There is no socialism if the proletariat and broad masses do not take part in decisions of government affairs and if they do not administer themselves in a democratic system. Socialism is not democracy for the ruling class and government officials and dictatorship over the masses as it is like in the Soviet Union and its allies. Socialism cannot be a system in which those who oppose are imprisoned, kept in concentration camps, tortured, executed and where the freedom of speech of the masses is abolished.

For the social-imperialists, socialism means when few self-proclaimed “geniuses” control state power isolating the party members, suppressing inner-party democracy and speak on behalf of the members of the party. It means where few (or one) individuals become autocrats worshiped and feared like gods. For us socialism means where party members discuss and decide on important decisions, where the leadership is everytime elected, where the party works on the basis of collective responsibility and leadership, where a genuine party which do not have mini-gods seize state power.

For the social-imperialists and fascists socialism is where a policy of chauvinism reigns supreme in the name of ’unity and indivisibility,’ the right of oppressed nations is trampled under the rule of the gun and where national oppression is maintained in many forms.

For us, socialism is a system in which the equality of and right of nations to self-determination is guaranteed; in which the languages, culture existence are respected, in which oppression nations use their own language as the medium of instruction; where there are no national privileges; where unity and assimilation is created on the basis of voluntariness and equality; where proletarian internationalism flourishes; and which is free of chauvinism and narrow national mindedness.

For the social-imperialists, socialism means depriving the political and organizational rights of other political organizations and putting them under their tutelage. It means to claim the right of invading other countries, exploiting peoples, controlling other goverments and abolishing their state sovereignity.

Socialism is democracy, equality and respect of people and countries, brotherhood and proletarian internationalism, justice and peace. What social-imperialism practices is the invasion of Czechoslovakia, dispatching mercenaries to put down national liberation movements of other countries. As an imperialist power, it also competes and contend or collude and agree with other imperialist powers for the plunder and division of the world. 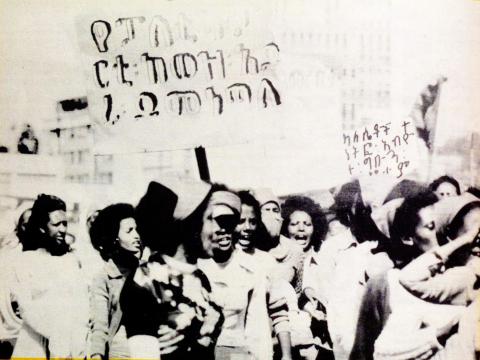 Class and Revolution in Ethiopia

Extracts from John Markakis and Naga Ayale's book 'Class and Revolution in Ethiopia', published in 1978, a year after Ayale was killed in one of… 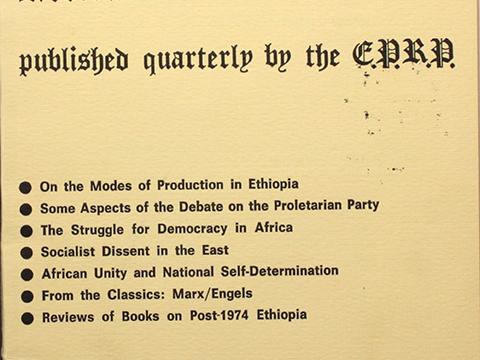 The Class Character of the Ethiopian Revolution

This really interesting passage on the class nature of the Ethiopian revolution appears in an article by Mulugeta Osman (a pseudonym?) that is… 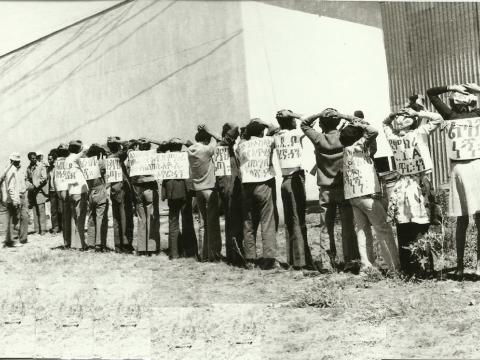 Ethiopia and Socialist Theory: The Blood on the Wall

Ken Tarbuck was a member of several different Trotskyist groups in the until the early 1970s. He went to Ethiopia to work as a university… 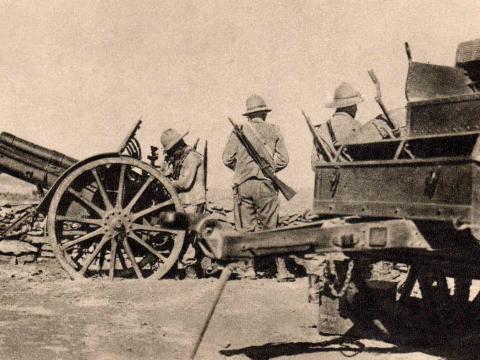 Soviet Appeasement, Collective Security, and the Italo-Ethiopian war of 1935 and 1936