Che Guevara, after his execution.
Copied to clipboard

The double tragedy of Che Guevara

The 30th anniversary of the death of the Latin American revolutionary Che Guevara has brought forth a series of remembrances of his life and work. We print below Raya Dunayevskaya's In Memoriam to Che, entitled "Che Guevara, Revolutionary," as it appeared in News & Letters, November 1967. Dunayevskaya also discussed Che's contributions and limitations in such works as Philosophy and Revolution (1973) and Women's Liberation and the Dialectics of Revolution (1985). Footnotes to this text were supplied by the editors.

By Raya Dunayevskaya/Founder of Marxist-Humanism

Che Guevara has joined the ranks of immortal martyrs. What makes his martyrdom unique is that he chose not to remain part of the new state power, although he had been a leader of the successful revolution in Cuba. He gave up his post as head of the economic ministry and embarked anew on the hardships of guerrilla fighting in still another country, Bolivia.

Che's death in Bolivia at the hands of the U.S.-trained-and-led Bolivian Rangers was a case of outright murder. He had been wounded and surrounded by a force of 180, armed with automatic rifles. He was alive. From Quebrado del Yuro, where he had been overwhelmed, he was carried five miles on a stretcher to the town of La Higuera. There the Bolivian army junta was asked what to do with him. Assured of American support, they ordered him shot.

Although Bolivia has no official death penalty, Che was executed within two hours of arrival in La Higuera. Seven bullet holes were clearly visible, including one through the heart, administered after he became a prisoner. His fingers were then cut off to identify his fingerprints, obligingly sent to the Bolivian military by the Argentinean junta. His body, strapped to a helicopter, was then flown to Valle Grande and taken to a Catholic hospital where the body was put on public exhibition.

So afraid was the Bolivian military of even the dead Guevara that, though it is against all custom in Catholic Bolivia, his body was nevertheless cremated. Even that didn't end the macabre ritual. As if that would stop Che from becoming a beacon for all Latin Americans struggling for freedom from their own oligarchy and U.S. imperialism, they then scattered his ashes to the wind. (1)

WHEN THE TIME WAS RIPE

In vain are all these frantic efforts to erase the memory of the revolutionary martyr. Pure delusion is the thought that, with his death, the revolt against the exploitative regime has ended. Bolivia has more than doubled its military budget during the Barrientos tyranny. (2) In view of the fact that Bolivia is at war with no one--that is, no outside enemy, large or small--it is clear that the 17% of the national budget spent on "defense" is spent on arms to fight its own masses. When the time is ripe, the cold-blooded murder of Che will be avenged by the Bolivian masses who will put an end to this oligarchal regime.

The Bolivian masses had once before succeeded in ridding themselves of a military junta soon after the end of the world war. But they also found that it is insufficient to succeed "at home" unless they also overthrew U.S. imperialism's iron grip on the country's economy. It is this which Che's fight has highlighted.

To prepare themselves for the uphill struggle on two fronts it becomes necessary to also have a clear head, that is to say, a revolutionary theory, fully integrated with the self-activity of the masses. It is for this reason that we must not blind ourselves to the double tragedy of Guevara's death. Bravely he lived and bravely he died, but he did not do in Bolivia what he had done in Cuba: relate himself to the masses.

Guevara's isolation from the mass movement arose from a certain concept of guerrilla warfare as a substitute for social revolution. The impatience with the masses who do not rise at the call of the guerrilla leaders, the disdain for the city, which Castro had called "a cemetery for revolutionaries and resources," the scorn for theory--all adding up to isolating Guevara from the Bolivian masses at the moment he decided the time was ripe. His tragic death makes it imperative that these facts become widespread because there is no other way to uproot oppression once and for all.

Che himself admitted, in tracing the development of the Cuban revolution, that "The men who arrived in Havana after two years of arduous struggle in the mountains and plains...are not the same men, ideologically, that landed on the beaches of Las Coloradas....Their distrust of the campesino has been converted into affection and respect for his virtues; their total ignorance of life in the country has been converted into a knowledge of the need of our guajiros: their flirtations with statistics and with theory have been fixed by the cement which is practice."

However, the theory and practice of guerrilla warfare as if that were the only road to revolution led Guevara to disdain other forms of class struggles--from a minor strike to a general strike, from political struggles to theoretical development, including the separation of true Marxism from Communist perversions.

Because Guevara could not separate the one from the other, he became impatient and looked for shortcuts to revolution. Yet he himself did, at certain critical periods, understand that only when the working class and the peasants are united, "the first step toward definite liberation is taken."

This is what the guerrilla fighter forgets when he becomes impatient and wishes to substitute himself for the masses. At those moments, Guevara argued against the statement of Lenin: "Without a revolutionary theory, there is no revolutionary movement."(3) Instead he held that "even if theory is not known, the revolution can succeed if historic reality is interpreted correctly and if the forces involved in it are utilized correctly." (4)

But it is not a question of "utilizing" the forces. A revolutionary who appreciated the elemental surge of the masses learns from them because he sees them as reason, not only as mass force and energy. The fatal flaw in the concept of guerrilla war, whether that be the concept of Guevara or Mao or Giap (5), is that it is taken to be the equivalent of social revolution.

It is impossible, however, to create revolutions from above. They arise from the spontaneous, creative self-activity of the masses. The theoretician who learns this prepares himself for the revolution.

To work out a new relationship of guerrilla fighting to social revolution, of theory to practice, of the class struggles of the factory workers and those of agricultural laborers remains the task. In this way alone can the death of Che Guevara become a movement toward so total a revolution that it will abolish decadent capitalism and create a totally new, humanist foundation for life and labor and thought--a new society.

1. Contrary to this report at the time, it was later learned that Che's body was buried in a secret grave.

2. Gen. Rene Ortuno Barrientos seized control of Bolivia in a military coup in 1964, and ruled the country through an oppressive dictatorship until his death in 1969.

4. This statement is from Che's NOTES FOR THE STUDY OF THE CUBAN REVOLUTION (1961).

5. Vo Nguyen Giap (b. 1912), Vietnamese military and political leader who led the guerrilla war against the French and later the U.S.

"Long before we created the phrase 'trilogy of revolution' with the completion of ROSA LUXEMBURG, WOMEN'S LIBERATION AND MARX'S PHILOSOPHY OF REVOLUTION, we did not fail to give our support critically only, not even if the subject was so great a hero as Che Guevara.... The 20th century revolutions, whether of the early 20th century-- 1905, 1917, 1919-- or those of post-World War II, no matter how more relevant to our day, need to be measured against the philosophy of revolution of the founder of us all, Karl Marx."

--Raya Dunayevskaya, "Not by Practice Alone: The Movement from Theory" (1984)

* Lecture on "The Philosophic Foundations for the Struggles for Freedom in the Latin American and Afro-Asian Countries" (October 1960), in SUPPLEMENT TO THE RAYA DUNAYEVSKAYA COLLECTION, microfilm no. 13782.

* Critique of Che Guevara and Regis Debray's REVOLUTION IN THE REVOLUTION in chapter 9 of PHILOSOPHY AND REVOLUTION, FROM HEGEL TO SARTRE AND FROM MARX TO MAO (1973).

* Correspondence with Argentinean Marxist theorist Silvio Frondizi and Peruvian feminists as well as an essay on Latin America's unfinished revolutions, in chapter 20 of WOMEN'S LIBERATION AND THE DIALECTICS OF REVOLUTION (1985).

* Discussion of the Bolivian Revolution of 1952 and the search for a "new sense of objectivity" in today's Latin American revolts, in "Not by Practice Alone: The Movement from Theory" (1984) (see THE MARXIST-HUMANIST THEORY OF STATE-CAPITALISM). 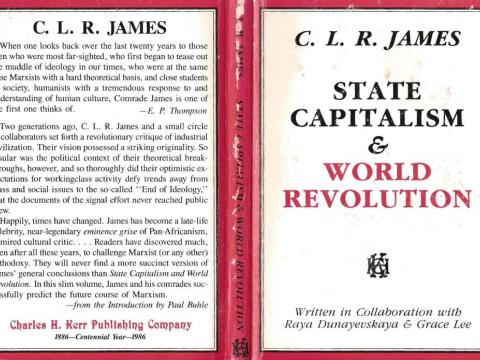 "State-Fetishism": some remarks concerning the Red Army Faction - by A. Grossman

Something smells different in Cuba

Mayday statement of Cuban anarchists about the post-Fidel situation and the prospects for anarchism and workers' control in Cuba. 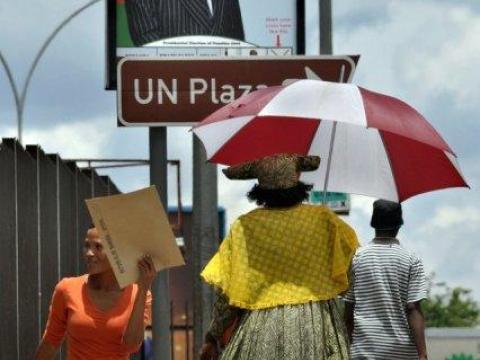