The International Social Revolutionary Party ‘Proletariat’ (Międzynarodowa Socjalno-Rewolucyjna Partia „Proletariat”, 1882-1886; aka the First Proletariat) was the first socialist party in Poland (at the time a territory divided by the Russian, German and Austrian Empires). The following is a timeline of its formation, growth and decline.

• 1870s: first industrial strikes break out in Poland, a consequence of the ongoing transition from small-scale manufacture to large-scale industry. At the time, any anti-government activity was prohibited and suppressed, and trade unions did not yet exist (they only appeared in Poland after 1889, the very first one, Związek Wzajemnej Pomocy, had a Catholic character). Strikes were ad hoc and of an unofficial nature.
• 1876: socialists, many of them students educated in Russian universities and inspired by the political climate of the time (a mix of Marxism, Narodnism and anarchism), go into factories and workshops to study the movement of the working class. In major cities, at first mainly Warsaw, they get factory jobs and form worker circles (kółka robotnicze), made up of 10-15 members each, with a double purpose: education and agitation. Among these students is Ludwik Waryński (1856-1889), the future founder of the First Proletariat.
• 1878: through these circles, the first Polish translations of socialist publications become available to workers (initially just a couple of pamphlets: Lassalle’s ‘Kapital und Arbeit’, ‘Die indirekte Steuer’ and ‘Arbeiterprogramm’, Wilhelm Bracke’s ‘Nieder mit den Sozialdemokraten!’, and some Russian Narodnik brochures by authors such as V. E. Varzar). The socialists in Warsaw, among them Waryński, produce the Programme of Polish Socialists, pledging allegiance to the First International. They begin to set up strike funds (kasy oporu). Unlike the worker circles, which had an initiation procedure and were open only to the more politically advanced workers, the strike funds had a more universal purpose. First political repressions occur in autumn, forcing Waryński to leave for Lvov. By winter, nine revolutionary circles are active (bringing together over 100 workers), and contacts are made with radical peasant circles in the countryside.
• 1880: a number of socialist groups in exile and abroad come into shape (e.g. in Lvov and Geneva). A group in Geneva, organised around the paper ‘Równość’ sets up a conference on the 50th anniversary of the November Uprising. With the cry of ‘Vive I'Internationale!’, it declares the era of ‘Vive la Pologne!’ to be over. Waryński disagrees with Marx and Engels’ view on Polish independence, popular at the time in socialist circles:

What differentiates our present meeting from so many previous ones is the way in which we relate to one another – we Polish socialists and you, our Russian comrades. We do not appear before you as champions of the future Polish state, as the oppressed subjects of the Russian state, but rather as representatives and defenders of the Polish proletariat in relation with you, the representatives of the Russian proletariat. The ideals of Slavic confederation, of which Bakunin dreamed, are entirely foreign to us. We are completely indifferent to these or those borders of the Polish state, which so excite our patriots. Our fatherland is the entire world. We are not the conspirators of the “thirties”, who seek out one another in order to increase our own numbers. We are not the fighters of 1863, who were bound together only by a mutual hatred of the Czar, and who lost their lives on the field of the nationalist struggle. We have no national enemies. We are countrymen, members of one great nation which is even more unfortunate than Poland, the nation of the proletariat.

• 1881: International Socialist Congress at Chur takes place. From Poland, Waryński represents the internationalist current around ‘Równość’, while Bolesław Limanowski the social-patriotic current around the short-lived socialist association ‘Lud Polski’ (1881-1882). In the same year Waryński and others send greetings to the Black International of Johann Most and the anarchists. While their anarchist leanings are more and more a thing of the past, now substituted by Marxism, Waryński and his followers still consider anarchism to be the left wing of the socialist movement. This leads to a split in ‘Równość’, and an end to the publication of the paper. A new paper, ‘Przedświt’, soon replaces the old one, and within its pages Waryński critiques the social-patriotic current of Limanowski and 'Lud Polski'. By November 1881, Waryński and ‘Przedświt’, inspired by the activity of Narodnaya Volya, come out in favour of creating a single socialist party across the whole Russian Empire, open to all nationalities. Waryński comes back to Warsaw to start the process by uniting the existing revolutionary circles and setting up new ones. Szymon Diksztajn, a founding party member, publishes the influential pamphlet ‘Kto z czego żyje?’ which helps to popularise the central ideas of Marx’s Das Kapital.
• 1882: in January, the core of the worker circles develops into the International Social Revolutionary Party ‘Proletariat’. Class struggles in Warsaw continue: 2,000 workers of a railway manufacturing factory take strike action in response to sackings and pay cuts. Since the factory is owned by Poles, the patriotic press condemns the workers for turning against the national interest. More strikes follow in the printing industry. Conditions appear ripe, and in September the First Proletariat publishes its party programme.
• 1883: January conference in Vilnius organised by the First Proletariat and student groups from across the Russian Empire, with the future goal of creating a single party of the whole Russian Empire. In February, the First Proletariat attains its first victory: when the Russian authorities in Warsaw introduce compulsory ‘sanitary examinations‘ for all female workers (previously used just on sex workers), the party distributes flyers calling on workers to resist. The authorities fear retribution and decide to scrap the ‘sanitary examinations’. Following this, the party makes further appeals to female workers to continue their struggles, and join the ranks of the party. A split in the First Proletariat takes place over tactics. Puchewicz and his followers leave to form the short-lived Partia Robotnicza ‘Solidarność’ (1883-1884), which opposes individual terror and direct workers’ action in favour of peaceful agitation. The First Proletariat grows nevertheless, forming cells in other cities, reaching out to landless peasants and Russian soldiers, and prints its own paper, ‘Proletarjat’. New members bring further influences from Narodnaya Volya. In September however the party takes a big hit as Ludwik Waryński is arrested. On his way to a meeting Waryński stops at a shop, together with Szczelepnikowa, a member of Narodnaya Volya. He leaves behind a folder with party materials in the shop, and comes back for it, unaware that the authorities have been already notified by the shopkeeper. He knocks out a policeman, Szczelepnikowa manages to flee, but he himself is caught – he would spend the rest of his life in prison doing hard labour, and pass away in 1889. With Waryński out of the picture, the Narodnaya Volya current takes over from the Marxists. The party produces a new paper, ‘Walka Klas’.
• 1884: Narodnaya Volya and the First Proletariat make an official alliance. The party embraces individual terror and Blanquism rather than mass action. This tactic causes great losses for the party, as members are killed or arrested, breaking the core of the organisation. Between 1883 and 1884 around 200 members, many influential organisers, end up in prisons.
• 1885: new leadership takes over the party: Marja Bohuszewicz, Rozalja Felsenhardt and Józef Razumiejczyk. They manage to organise a demonstration of the unemployed in Warsaw attended by around 1,000 people. More arrests follow: Bohuszewicz, Felsenhardt and Razumiejczyk are all caught. A trial of 29 Proletariat members (including Waryński, and others already arrested in 1883) distributes death sentences, deportations to Siberia and hard labour.
• 1886: in January, Stanisław Kunicki, Piotr Bardowski, Jan Pietrusiński and Michał Ossowski are executed on the Warsaw Citadel. With over 300 members now in prisons, the party mostly ceases to be. Nevertheless workers’ circles still endure, and new ones are created without party assistance. Outside of Poland, ‘Walka Klas’ and ‘Przedświt’ are still being printed.
• 1887: distribution of ‘Walka Klas’ and ‘Przedświt’ resumes in Poland.
• 1889: formation of the Second International. Limanowski and Stanisław Dubois are present at the Possibilist conference, 4 other Poles are present at the Marxist conference, likely from the remnants of the First Proletariat. The remnants of the old party develop into the Second Proletariat (1888-1893). The new party is able to grow again, and manages to lead a few successful strikes. Also in 1889, a group dedicated to fighting only economic battles, the Związek Robotników Polskich (ZRP; 1889-1893), is set up with some input from former members of the Proletariat. It establishes new factory circles and gets involved with strikes.
• 1890: the strike funds are revived by the Second Proletariat and the ZRP. Together they organise a May Day demonstration in Warsaw and a strike of 8,000 workers. In both groups there is friction between internationalist and social-patriotic factions.
• 1892: the ZRP, the Second Proletariat, remnants of the First Proletariat, and other small socialist groups unite to form the Polish Socialist Party (Polska Partia Socjalistyczna, 1892-1948).
• 1893: the internationalists split, among them the young Rosa Luxemburg, a former member of Proletariat, and come together to form the Social Democracy of the Kingdom of Poland. Later known as the Social Democracy of the Kingdom of Poland and Lithuania (Socjaldemokracja Królestwa Polskiego i Litwy, SDKPiL; 1893-1918).

Some observations: the beginnings of the party, characterised by students ‘going into the factories’ is of course reminiscent of the populist movement’s ‘going to the people’, except here workers are taken as the revolutionary subject. Arguably this proved more successful than similar agitation among the peasants. Initially, the First Proletariat was able to fill a gap in the cities that existed in the absence of trade unions (setting up strike funds, organising meetings, demonstrations and strikes). Because it did not defend any particular national interest, the party was open to all nationalities and could back all manner of class struggles, including those against Polish capitalists. All of this, despite its small size, constant repression, and the fact that socialism was still a novelty at the time, allowed it to make a presence among the workers in the urban centres of Poland (largely in Congress Poland, the area under Russian control). The political direction of the party, embracing degrees of Marxism, Narodnism and anarchism, had both its positives and negatives. By being open to diverse elements, for a while it was able to promote an internationalist class struggle approach among a wider political milieu. On the other hand, the influence of Blanquism and tactics of individual terror at times took over, resulting in the liquidation of its core membership and provoking even harsher retribution from the authorities. The question seemed to be whether to ally with the political course plotted by the First International or that of Narodnaya Volya. In hindsight, the fact that no close contact was made with the Emancipation of Labour group appears like a wasted opportunity (would this be the case if Waryński was not arrested in the same month as the foundation of Plekhanov’s group? Or was the friendship with Narodnaya Volya already too entrenched to make a difference?). In the end, the internationalism of the First Proletariat (even though not all elements of the party embraced it) was an influence on the SDKPiL and the left wing of the Communist Party of Poland, but by others (be it social-patriots, Stalinists or liberal academics) the party was, and still is, accused of ‘national nihilism’, of misunderstanding the conditions in Poland at the time, and ignoring the alleged importance of the national sentiment.

Sources and further reading: Henryk Bitner - Proletarjat: pierwsza socjalno-rewolucyjna partja w Polsce (1934); Rosa Luxemburg - In Memory of the Proletariat Party (1903), Foreword to the The Polish Question and the Socialist Movement (1905) 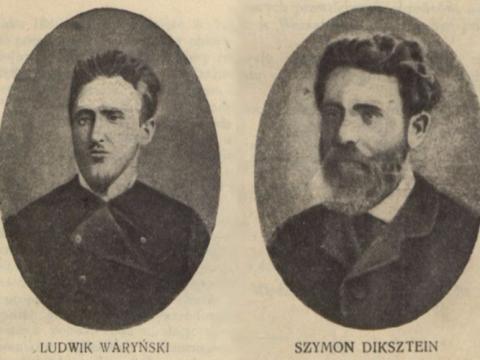 The following programme, also known as the Brussels Programme, was written in 1878 by a group of socialists in Warsaw. Some of its authors…
Image 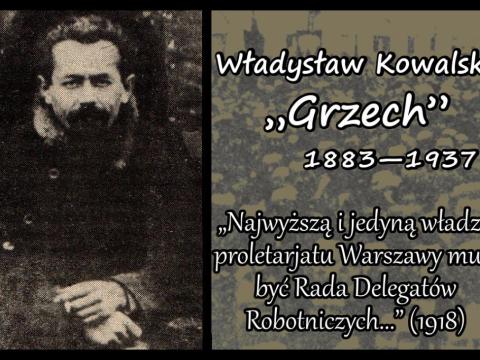 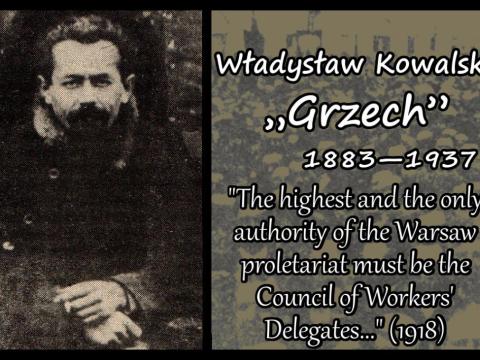 A number of conflicting political currents had their beginning in the Communist Workers’ Party of Poland (KPRP). One of the earliest of these…
Image 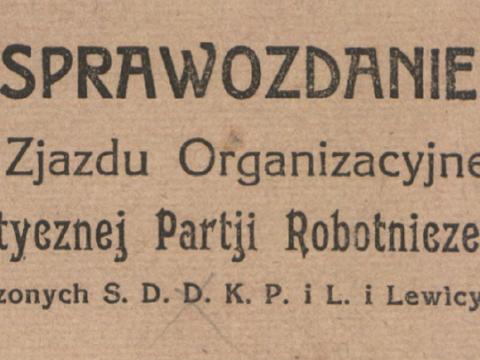