Cindy Milstein on the Québec student strike as some general assemblies start to vote to return to class.

On August 10, I posted a photo on my Facebook page of a delicate red square with the caption "[the] fragility & sweetness of social struggle." Little could I have guessed, however, just how fragile the Quebec student strike movement would prove to be only three days later. On August 13, in hugely attended general assemblies, students at three cégeps (pre-university/vocational schools, part of the legacy of free and accessible education won in the 1960s' Quiet Revolution) voted away their own collective social power and political bargaining chip: the strike. Within hours, the students went from having the offensive and creating a crisis for the government to letting the government's scare tactics of provincial elections/repressive law work their magic and gain the upper hand again. It's been the same story every day this week.

Two courageous cégep general assemblies, against all the odds and intensity, held firm to the strike. After that vote, a small group of "anti-strike" students who lost used a procedural mechanism versus the good faith within the assembly structure to petition for re-votes at both those cégeps tomorrow morning: Vieux-Montreal and Saint-Laurent. The school administrations then heaped on additional pressure to not only support the re-vote but overturn the strike (word is that the admin at Vieux-Montreal has even threatened students with failing them completely if the strike goes forward).

There are moments, I'm discovering more than ever, of profound crossroads in social movements, when momentum swings in one direction or the other, and moreover, when it's important for people to stand up in solidarity with those who feel scared or pressured to back down. How people view what's happening at such a critical juncture matters in terms of sustaining a social movement . There are still tens of thousands -- upward of a hundred thousand or more even -- students still under strike votes at various schools, including the colleges and universities that start later this month and into September. There is still a huge social movement, and still many students who support the strike but voted, often out of fear, to end or supposedly delay it for a bit (by and large, the state's psychological warfare worked). Many people (including many students) are now calling the cégeps' votes to end the strike "a truce," hoping that students will pick up the strike again after this short "extra" semester -- added because of the strike and lost class time. But a truce implies two camps both equally making ceasefire concessions; in this case, the provincial government has bludgeoned the student strike to near death. And it's not so easy to simply restart a widespread strike, much less a social movement.

All to say, what happens now matters a great deal in terms of this strike and social movement, not only here, but also as inspiration and hard-learned lessons for other struggles globally. It matters a great deal what those many tens and hundreds of thousands who are part of this social movement do at this point -- students, teachers, staff, neighbors, workers, and so many others -- after six long months of resisting in all sorts of imaginative, strong, and bold ways.

Those many students still holding collectively to the strike tactic -- not just for themselves but also for notions like free education for everyone and forms of self-organization, and so intimately tied into a larger austerity struggle -- need our solidarity, strength, and love right now. In particular, Vieux-Montreal students favoring the strike are asking for a large show of folks and support outside their school tomorrow morning, Friday, August 17, at 8:00 a.m. (Ontario and Sanguinet in Montreal), standing with them in whatever way they ask of us. It's unclear whether Saint-Laurent wants supporters there or not -- out of a concern that nonstudents there might be seen as meddling in a difficult moment for the Saint-Laurent students -- but there is one Facebook event asking for a demonstration at 9:00 a.m. (http://www.facebook.com/events/258521384265430/).

I've been in numerous conversations this week about what the votes this week mean, what happened, and what next, among so many other discussions, speculations, and critiques, but also what solidarity looks like right now. At the same time, I and thousands of others have also been experiencing tumultuous waves of emotions, ranging from denial to anger to depression -- all summed up, for me, as "heartbreak." I've tried writing something about all of the above and more this week, ever since Monday, but every time I start, I end up staring at my computer screen, immobilized by a heavy sorrow that won't let words flow easily. That's a strange feeling for me. Usually words are what help me process difficult times and hard emotions. I'm not alone; nearly ever time I run into someone engaged in this student and social movement, there's this bleak look in their eyes. It's been a long, long, long and hard week here in Montreal.

Yet again I'm back to what feels like "lost in translation" even trying to explain it. The power -- the social power -- of this movement was the greatest I and many of my friends and acquaintances here have ever experienced. You come so damned close to what might just start tipping the scales toward a better world, closer than you ever dreamed possible, and in a matter of a few hours on a Monday earlier this week, it suddenly seems as if it all vanished into thin air. So many of us walked together on that illegal night demo on Monday evening, processing ad nauseam, until I think we all managed to convince ourselves again of spit and fire and hope. That we shouldn't give up so easily. That now, more than ever, the social side of this movement had to step up, both in terms of what it is doing organizationally and to make its solidarity clear, so those still-striking students would know they have allies. Because if they vote to remain on strike, the state and police will certainly exert renewed and likely harsher force.

Which brings me around to tomorrow morning, soon. I don't know if this is the right decision or not. I don't quite know the right answer about what solidarity should look like in relation to the students -- who started their own movement, and in turn birthed a substantive and far-reaching social movement that is now both dependent on the students and larger then them. Those in the social movement who aren't students are definitely feeling the weight of that position this week. Many argue that we should thank the students for all they've done, understand their tricky situation, and not "take sides" tomorrow when we stand outside those one or two general assemblies, and perhaps that is the right view. After all, the autonomy and self-governance of each school (and often departments within each school) has been a touchstone principle and key to the organizational strength/growth of the strike as well as movement.

Still, I keep coming back to decisive moments, those quick and fragile instances when all is won or lost. Not crisis; rather, crossroads. And I keep asking myself, "Where do I stand?" Two days ago, a friend in Europe asked me to write 120 words about why I'm an anarchist for a German newspaper that's doing a feature on anarchism and wants several of these anarcho-blurbs as sidebars. I joked that rather than sending him what amounted to a tweet or fortune-cookie insert, maybe I should just contribute one word: "freedom." This evening, after the first-ever stressful autonomous popular assembly meeting in my summertime neighborhood (due, in large part, to the collective stress and heartache everyone is feeling), I think that I have my own answer to where I stand -- always, always, on the side of freedom, even if that isn't exactly solidarity or the popular thing to do come 8:00 a.m.

I'll be at Vieux-Montreal tomorrow morning, not to disrupt the general assembly or scream at students I don't agree with, but also not to neutrally be there merely to offer a general thanks. I'll stand by the side of those students who want to continue to stand for the strike and all it's come to symbolize, against all the psychological and physical warfare that's been thrown at them to get them to back down.

And when my heart is feeling a tiny bit better, soon, likely after seeing these brave students tomorrow try to do what's right, I'll be ready to share a lot more about this bittersweet week. 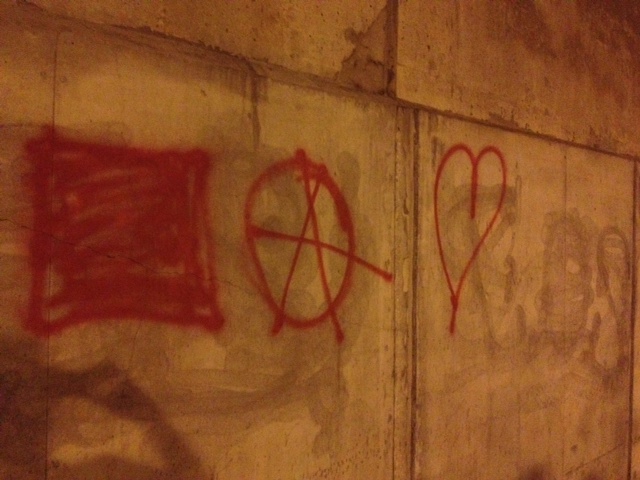 Dedicated, in solidarity and with admiration, to those students at cégeps Vieux-Montreal and Saint-Laurent who vote to hold firm to their strike during the re-vote at their general assemblies tomorrow morning.

Photos by Cindy Milstein, from the walls of Montreal, summer 2012.

If you've run across this blog post as a reposting somewhere, please excuse the typos/grammatical errors (it’s a blog, after all), and note that you can find other blog-musings and more polished essays at Outside the Circle, cbmilstein.wordpress.com/. Share, enjoy, and repost–as long as it’s free, as in “free beer” and “freedom.

Since I'm not currently, or even recently, involved in any mass social movement it might be a bit cheeky of me to comment, but I have valued these personal/political insights and your conclusions seem sound to me, since whilst the reference to the importance of 'autonomy and self-governance' of the schools and departments in the initial build up of the movement may be correct, no movement can 'move forward' on the same basis as it's origins and the assumption of autonomy for students, as for workers, in terms of the capitalist division of social space has historically always been a weakness. There are no guarantees of success which ever way it goes but we hopefully learn by these experiences.

Maybe so Spiky, but not when they're written by liberals like Milstein...

I found it difficult to decipher any cohesive politics to this blogger but it has been one of the few detailed reflections written from personal experience here.

Perhaps these blogs need more responses from people more clued up than me on the politics of those involved?

BB, not sure what you think qualifies her as a "liberal" 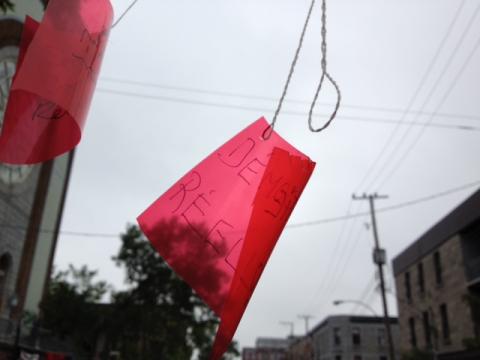 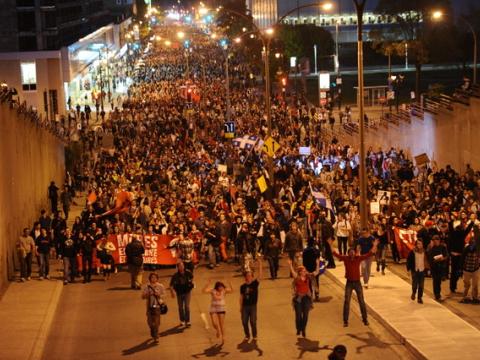 Snapshots of the student movement in Montreal

At the bottom of this article are links for how your trade union or community group can support the students’ struggle. That will help… 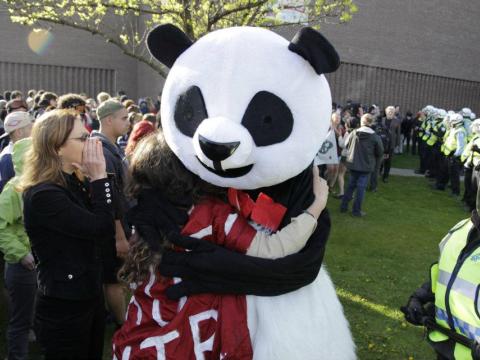 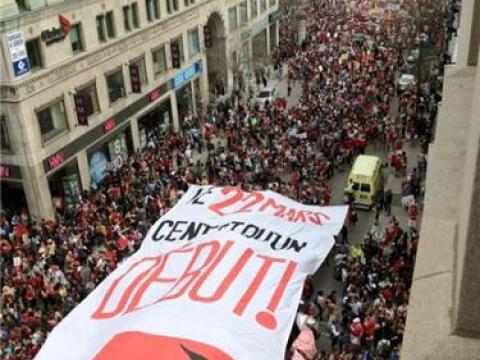