Greece after the school occupations, 1991

In the winter of 1990 to 1991 Greece was swept by a wave of high school occupations that forced the recently elected right-wing government to back away from unpopular education reforms. This report on the unrest was written shortly afterwards.

ATHENS - Monday, February 25, 1991
A wave of high school occupations forced the government late last month to withdraw education legislation and promise to discuss its proposals with students piece by piece.

The seven-week occupation of 2000 high schools was the biggest challenge yet to the 10-month rule of Prime Minister Constantine Mitsotakis and his reactionary New Democracy party (ND).

The high school movement is unprecedented in its depth, unanimity amongst students, freshness and radicalism. Week after week, hundreds of thousands of high school students held meetings at their schools and voted in huge majorities to continue the occupations, and they continually took to the streets in enormous demonstrations.

The two mass reformist opposition parties, the Pan-Hellenic Socialist Movement (PASOK) of former Prime Minister Andreas Papandreou, and the left coalition, consisting of the Greek Communist Party (KKE) and the Hellenic Left, were taken completely by surprise by this spontaneous upsurge and quite unable to influence it.

This enormous movement has put a definite end to the wave of conservatism and apathy that had been on the rise for several years. Gradually, most of the country's universities and colleges were also occupied, and the movement was widely supported by both teachers and parents.

Murder of teacher
The movement was brought to a tragic climax on the night of January 8 with the premeditated murder of 38-year-old teacher Nikos Tembonera inside his school in the city Patras by local leaders and the national president of ONNED — the youth organisation of New Democracy.

Returning from the Christmas break on January 7, students around the country had voted in huge majorities to continue the occupation movement for better education and the repeal of anti-education legislation of the ND government.

At that point, ND gave official licence to "angry parents" (ie, ND members) to try to smash the occupations. As the occupations were "illegal", ND made it clear that the police would not intervene.

Throughout January 7 and 8, ND thugs attacked schools all over the country, causing dozens of injuries to students, parents and teachers, but were completely unsuccessful in ending any of the occupations. A molotov cocktail was even thrown into an Athens school by the thugs.

In the middle of the night of January 8, the ONNED leaders attacked a school in Patras with clubs, chains and iron bars and physically expelled the students. Assembling outside, the students called on the teachers and parents for help. When they arrived, they escorted the students back into the building, led by Nikos Tembonera.

The ONNED thugs viciously attacked the crowd and literally opened the head of the unfortunate teacher. Just in case anyone thought it was an accident, they exposed their genitals to the crowd in a show of manliness as they escaped. Though the cops had been called at the same time as the teachers and parents, they only managed to turn up 20 minutes after the thugs had escaped.

Tembonera had been a respected figure in the education movement and a member of the Workers' Anti-Imperialist Movement.

These thugs were well known to the ND leadership. They are members of paramilitary organisations which have been organising inside ONNED for years. They have carried out dozens of violent attacks on individuals and offices of other parties, and in 1988 Mitsotakis personally aided the rise of their faction within ONNED — a process which in itself involved violence.

Police riot
The murder provoked immediate demonstrations all over the country. On January 10, Athens had the biggest outpouring in 15 years, with a human sea of some 150,000 people completely filling the city and demanding that the "government of assassins" get out.

After marching all day, high school students gathered for their own demonstration at 6 p.m. in Omonoia Square in central Athens. The entire march, and this demonstration, were completely peaceful. However, a group of 30-50 suspicious elements appeared from neighbouring streets and began lighting small fires in the middle of an empty road.

This provocation occurred several hundred metres from the student demonstration, but the infamous riot police (MAT) used it as an excuse to launch a massive tear gas attack on the students in the square. Tear gas canisters and exploded in the middle of the crowd, causing serious injuries. The students immediately ran off in every direction.

The MAT turned the whole city centre into a gas chamber. Altogether that evening 3500 canisters of tear gas, plus smoke bombs, were exploded by the cops. Students at the Polytechnic University were also attacked, in one case a tear gas canister exploding on the head of a student.

Chasing students down one main road, police fired a tear-gas or smoke bomb which exploded inside a clothes shop. The clothes caught fire, and the whole multi-storey building went up in flames. The fire brigade arrived, but even as they were trying to put out the fire, the MAT were exploding tear gas bombs next to them, causing immense difficulties to the fire fighters, some of whom had to be taken to hospital. The macabre outcome of this insane cop riot was four innocent people burnt alive inside the building.

The government seized the opportunity to try to blame "anarchists" for the fire, despite the lack of a single witness for such a story. The government further denied that it was possible for tear gas or smoke bombs to cause fires.

However, the 3500 tear gas canisters lying all over Athens belied this. Marked "may cause fires", the canister explains that the tear gas is only for "outdoor use". It also explains that it must not be fired directly at people as it "may cause death". It seems a miracle there were no further victims of this wave of right-wing and police terror.

End of 'consensus'
The student uprising and the murder of Tembonera (described by the government as an "unfortunate accident"!) have put an end to the illusions about "consensus" and the idea that the Greek right had changed and become "modernised" — illusions spread by the left liberal press and the Left Coalition now for over two years.

Indeed, on the mass marches, one of the common chants was "When they all get it together in parliament house, the only opposition is us". Until the high school uprising began in late November, the "consensus" — ie, lack of opposition — being practised by PASOK and the Left Coalition was so blatant that even the right-wing newspapers were commenting, and at one point Mitsotakis complained, that a government cannot function properly without an opposition!

As late as December, leaders of the Hellenic Left, one of the components of the Left Coalition, were still calling for a three-year accord for social peace and progress with the ND government. Such ideas have now crashed.

According to the author, "school occupations have been a consistent practice since the early 1990s with mass pupil movements practically freezing education for entire years in 1990-1991 and 1998 in response to reactionary educational reforms." 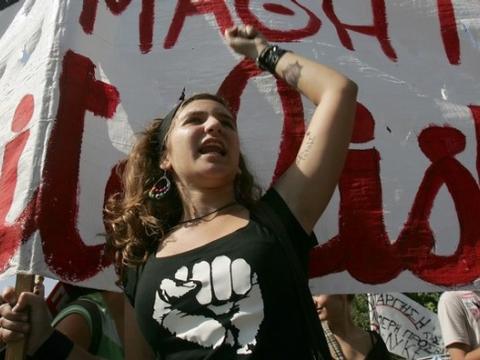 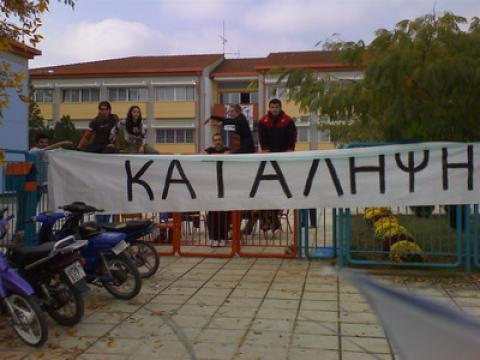