As Italians go to the polls for the 2013 election, much noise has been made in the media about the 5-Star Movement, led by comedian Beppe Grillo, that is supposedly ripping up the rulebook of conventional politics. 5 Star presents itself as a force against conventional "machine" politics and for a radical citizen's democracy. Anglophone media outlets from the BBC to the FT relay this image, mostly uncritically. Without claiming to be the last word, Giuliano Santoro's piece examines some of the more troubling realities that lie behind the iconoclast image of M5S. Originally published at DinamoPress

Italy has always produced anomalies that, in various ways, then go on to spread to other countries. Here, in the last few years, in the context of the economic crisis and the deterioration of political representation, a ‘charismatic party’ headed by a comedian-leader has taken root, one that uses the Internet and some of the language of social movements to win over voters disillusioned with the traditional parties and abandoned to the solitude of neoliberism. It is a complex phenomenon which we do not wish to dismiss with some slogan. Nevertheless, here are a few reasons not to trust Beppe Grillo and his “5 Stars Movement”.

The 5 Stars Movement (Movimento 5 Stelle, M5S) was founded on 4 October 2009 by the comedian Beppe Grillo and the businessman and web-marketing expert Gianroberto Casaleggio. Four years earlier, following the success of Grillo’s shows, the local forums “Friends of Beppe Grillo” were created via MeetUp, a pay-per-use platform. M5S is governed by the rules written by Grilllo and Casaleggio in the so-called “Non Statutes” (Non Statuto). Article 3 of the Non Statutes clearly states the proprietary nature of the organisation: “The name of the 5 Stars Movement is attached to a trademark registered under the name of Beppe Grillo, the sole holder of rights on its use”.

2. The lack of democracy.

The proprietary nature of the organisation’s trademark determines the authoritarian structure of M5S. Over the last few years, this became apparent in two ways. On the one hand, Grillo and Casaleggio have made sure that the website www.beppegrillo.it was the Movement’s only organ of communication and organisation. An organ where readers are only allowed to intervene in the form of comments to the posts, as you normally do on any mainstream news website. The Non Statutes and further rules introduced by Grillo have since established that is forbidden to set up local branches, develop autonomous means of communication, or participate in television programmes. On the other hand, the brand’s owners never allowed the Movement to hold national meetings. Anyone who tried organising assemblies to connect different geographical areas and discuss the issue of organisation was expelled from M5S. Each expulsion is exclusively decided upon by Grillo and his ‘staff’ (no one knows who the members of this staff are) and consists in a ban from using the Movement’s logo, in accordance with a purely corporate-minded rationale. Those who were purged said they received a legal notice warning them not to use the M5S brand, as it belongs to Beppe Grillo.

3. The Internet used as television.

At this point, some may be wandering how such authoritarianism could be confused with ‘direct democracy’ or ‘liquid democracy’. To understand this, we have to plunge M5S into the Italian social and media context. Beppe Grillo became famous starring on Saturday night TV shows. He also did a number of commercials. Then, in 1986, when he was at the peak of his fame and the Socialist Party heavily attacked him for a joke against its secretary Bettino Craxi, he suspended his regular television appearances and started touring Italy with a theatre show. Throughout the ‘90s, he continued attracting the attention of Italians thanks to a smart game of mutual back-up with several TV programmes (first and foremost “Striscia la Notizia”, the comical newscast created by Antonio Ricci – Grillo’s first author – and broadcast every evening on Canale 5, Silvio Berlusconi’s network). Then, in 2004, Grillo met Gianroberto Casaleggio and discovered the Web. He entered the Internet reproducing the vertical schemes of television and using on-demand video platforms. With Grillo, television colonises the Internet. Through him, millions of new Internet users are exposed to an acritical and ideological digital education. The hegemony of television, characterising Berlusconi’s brief Ventennio, moves into the Web 2.0. The Web is transformed into a huge machine to build consensus and conformism, rather than being used to facilitate participation and horizontal interaction between different subjects.

At the root of Grillo’s way to the Web is a deeply free-marketeer vision: the comedian-leader sees the Internet as the space where a perfect competition of ideas can occur, resources can best be allocated and wealth can be distributed fairly, where “expertise” can emerge and “merit” be awarded. Moreover, according to the ideology construed by Casaleggio, this should all happen automatically – social conflicts or negotiation power having nothing to do with it. It is what Wu Ming 1, in an article written on September 2011, placed in a wider scenario he defined as “digital fetishism” (http://www.wumingfoundation.com/giap/?p=5241).

5. The primacy of electoralism.

Grillo invested his notoriety-capital, accumulated on television, in the Web. The strength of the representation he offers fills the void of political representation. The umpteenth anomaly consists in the Movement saying it wants to go “beyond representation” but ending up legitimating the handing over of control – the electoral mechanism, the belief that voting is the only way to change things. If you follow the activities and discussions within M5S, you’ll see how everything now seems to be revolving only around the issue of votes and electoral campaigns. For M5S people, the point is not changing a system which does not work, but replacing those in government with “citizen”, professional politicians with “common people”.

“Neither left nor right".

In the beginning, leaving aside its organisational methods and communication style, M5S was mainly animated by ‘left-wing’ issues such as ecology, citizens’ participation, critical consumption, and the struggle against the abuses of political elites. Moreover, its activists often used the same symbols and slogans as global movements, such as the Anonymous mask, the flags against TAV (the high speed train line in the Val di Susa) or the images of the ‘Arab Spring’ squares and of the Spanish acampadas. However, M5S always defined itself as “neither left nor right”. It is not a way to distinguish itself from major parties, unified by their substantial endorsement of austerity policies. Vote analysis has shown that the M5S had its first electoral boom in the spring of 2012 in Sicily by winning over right-wing voters disillusioned with Berlusconi’s corporate party and the Northern League’s xenophobic secessionism. This happened because, in the name of representing “all citizens”, M5S also endorses traditionally right-wing discourses, such as resentment against migrants, opposition to Italian citizenship for second-generation migrants, calling for ‘national sovereignty’ to be reinstated, or a generic protest against ‘taxes’ and public spending. On the web, footage is circulating of a dialogue between Beppe Grillo and a candidate of CasaPound, a neofascist organisation. “The people of CasaPound want to know if you’re an antifascist”, the far-right militant says. “This is a problem which does not concern me”, Grillo answers. This is not the stuff “that matters”, Casaleggio's associate explains, to the point that a CasaPound member could well enter his “Movement”. That would not be a problem. “You are here just as we are”.

Thanks for posting. This party may have got more votes than any other party in the election:
http://www.guardian.co.uk/world/2013/feb/25/beppe-grillo-italy-election-success

Hum. Yes. That Guardian article is a good example of the almost uncritical, semi-hagiographic approach (with the exception of the last lines) that makes Santoro's piece a useful bit of counter-info.

For M5S people, the point is not changing a system which does not work, but replacing those in government with “citizen”, professional politicians with “common people”.

In the months before the Italian elections there was great concern that there might be a resurgence of support for fascist parties. There is certainly potential for such fear to become real: the economic and political crisis, strong popular dissatisfaction, unemployment, and widespread superficial racism. In this article, we look at the electoral results of the different Italian neo-fascist parties, while also… 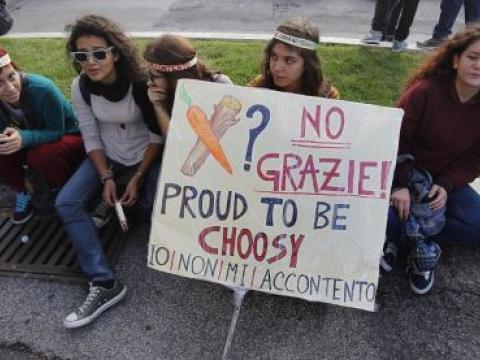 Analysis of the recent Italian elections, asking if they really constituted a rejection of austerity. 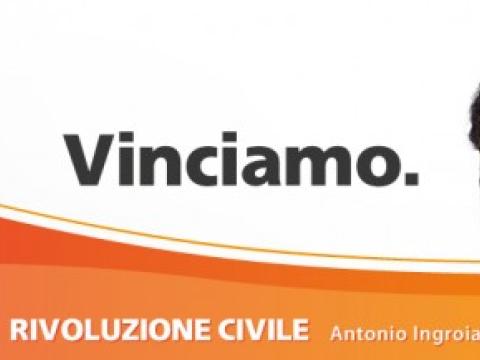 The defeat of the Italian left in the recent elections

The defeat of Rivoluzione Civile (Civil Revolution, a newly-established party) in the recent…

Now that the Five Star Movement has made such an impression in the Italian national elections, we…