Posted on 02/12/2016 to the Shahrokh Zamani Action Campaign website.

On November 28th retired workers of the Haft Tappeh Sugar Cane complex protested outside the company’s entrance, demanding payment of their end of service compensation.

One of the workers said: “After years of effort, with over 20 years of service, we were able to use the hard and hazardous work law to retire from this factory but it looks like the boss is giving the unavailability of financial resources as the reason for not acting according to his responsibilities. But those of us who are tired of this situation decided to have this protest.”

During the past few years the Haft Tappeh Sugar Cane workers have had many protests and strikes.

Posted on 04/01/2017 to the Shahrokh Zamani Action Campaign website.

The retired workers’ protests begun in late November and continued outside the company’s entrance until their representatives met the general manager of the Haft Tappeh Sugar Cane industrial complex. Their demands included the payment of retirement bonuses and four per cent for hard and hazardous work.

The workers’ pension benefits will be paid in two stages, ending by late October 2017.

Posted on 28/06/2017 to the Shahrokh Zamani Action Campaign website.
On Thursday, June 22nd, a further escalation in the Haft Tappeh Sugar Cane workers’ strike took place: the company’s security guards prevented thirty workers from entering the factory. The workers locked out by the bosses have between 18 and 22 years’ experience of working at the plant.

One of the workers said: “While all the striking workers have decided to stop production in response to the employer’s disregard for the payment of their trade demands, the security guards have prevented the entry of these 30 workers into the factory, arguing that they are leading the protests.”

He also said that since late March the Haft Tappeh Sugar Cane Complex workers have stopped work and production at the plant almost every day to protest against unpaid wages and insurance benefits.

According to this worker all Haft Tappeh Sugar Cane Complex workers have had a key role in the two-month-long protests, so if the employer intends to sack anyone then he should fire all the workers.

Posted on 12/12/2017 to the Shahrokh Zamani Action Campaign website.

This statement of the Haft Tappeh Sugar Cane Workers’ Union was issued after the second day of their latest strike.

In continuation of the strike that started on Saturday December 9th, today, Sunday December 10th, this strike took place with the extensive presence and support of the workers’ families. In today’s strike – on December 10th – the workers, together with their families, first attempted to close the access routes of vehicles carrying sugar cane to the factory, and then the workers shut off the steam furnaces. By shutting off the steam furnaces, the factory came to a complete stand still and all work stopped. Meanwhile, all workers in various parts of the company marched from the entrance to the office buildings. During the march, all workers chanted the slogan “Afshar have some decency, leave Haft Tappeh alone.” [Siamak Afshar is the company’s vice president.]

Unsuccessful management plot
Yesterday, the company’s management tried with a deceptive move to pay a portion of the wages of some workers, so that it could create discord within the ranks of workers. With this deceitful move the management tried, and is trying, to create divisions within the unity and sympathy of the ranks of workers to achieve the common demands of the workers, and to separate a number of them from the ranks of the struggle. But today, thankfully, we have witnessed the enthusiastic presence of all workers, and the management’s devious plan failed due to the workers’ consciousness and sympathy.

The strike continued with chants of a slogan against management until 11 o’clock. During the strike, the security forces were present in large numbers in the factory area, but the intimidation of the security forces failed to weaken the will of the workers.

A word with the workers
The Haft Tappeh Sugar Cane Workers’ Union considers unity, sympathy and solidarity of workers and families as part of the class struggle.

We have said many times and we will go on saying that the cause of all these hardships, poverty and misery of us workers is the capitalist system, and we have no choice but to have unity and solidarity in the class struggle to get rid of these misfortunes. With a well-organised and conscious struggle, we workers can floor the owners of capital. Today, the workers’ families were able to double the workers’ class strength and power by their presence. For this reason, we clasp the hands of all the workers’ families who were present at this strike, and we repeat that there must always be workers’ families in this class campaign and they must be present until the final victory. 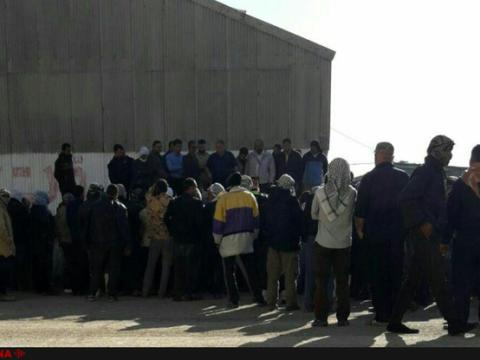 Iran: Call for demonstrations from the striking workers of the Haft Tappeh Sugar Cane Co.

Striking workers at the Haft Tappeh Sugar Cane Co. on Friday called for… 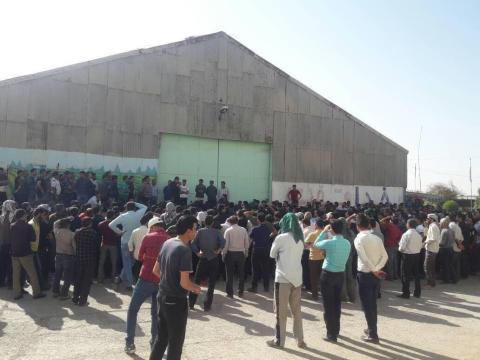 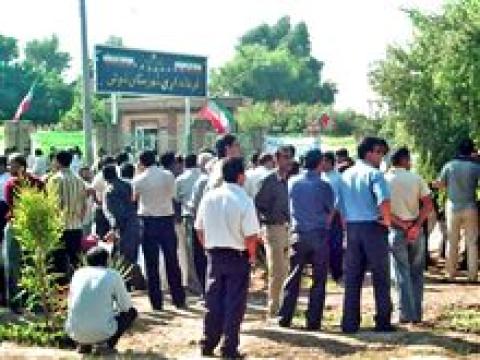