Statement of the Syndicate of Workers of Tehran and Suburbs Vahed Bus Company about the recent unrest sparked by discontent with the claimed results of the 2009 election.

Vahed Syndicate – Any Suppression or threat of civil liberty condemned

In line with the recognition of the labour rights, we request that June 26 Action Day – Justice for Iranian workers – to include the human rights of all Iranians who have been deprived of their rights.

In recent days, we continue witnessing the magnificent demonstration of millions of people from all ages, genders, and national and religious minorities in Iran. They request that their basic human rights, particularly the right to freedom and to choose independently and without deception be recognized. These rights are not only constitutional in most of the countries, but also have been protected against all odds.

Amid such turmoil, one witnesses threats, arrests, murders and brutal suppression that one fears only to escalate on all its aspects, resulting in more innocent bloodshed, more protests, and certainly no retreats. Iranian society is facing a deep political-economical crisis. Million-strong silent protests, ironically loud with un-spoken words, have turned into iconic stature and are expanding from all sides. These protests demand reaction from each and every responsible individual and institution.

As previously expressed in a statement published on-line in May of this year, since the Vahead Syndicate does not view any of the candidates support the activities of the workers’ organizations in Iran, it would not endorse any presidential candidate in the election. Vahed members nevertheless have the right to participate or not to participate in the elections and vote for their individually selected candidate.

Moreover, the fact remains that demands of almost an absolute majority of the Iranians go far beyond the demands of a particular group. In the past, we have emphasized that until the freedom of choice and right to organize are not recognized, talk of any social or particular right would be more of a mockery than a reality.

The Syndicate of Workers of Tehran and Suburbs Vahed Bus Company fully supports this movement of Iranian people to build a free and independent civil society and condemns any violence and oppression.

In line with the recognition of the labour rights, the Syndicate requests that June 26 which has been called by the International Trade Unions Organization ‘Day of action’ for justice for Iranian workers to include the human rights of all Iranians who have been deprived of their rights.

With hope for freedom and equality

The Syndicate of Workers of Tehran and Suburbs Vahed Bus Company

These rights are not only constitutional in most of the countries, but also have been protected against all odds.

They seem a bit naive about "most countries", and that makes me concerned about the possible course of the revolution... if they're not careful Iran might become an American colony again. That may or may not be an improvement on the present situation (the 1979 revolution was a more or less lateral transition from what I can tell) but either way it would fall far short of the revolution's potential. 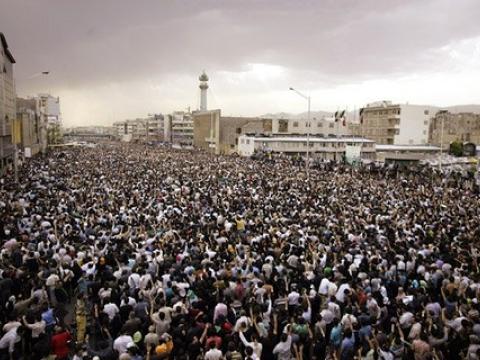 Wildcat analyse the demonstrations and riots sparked during the Iranian elections of 2009. 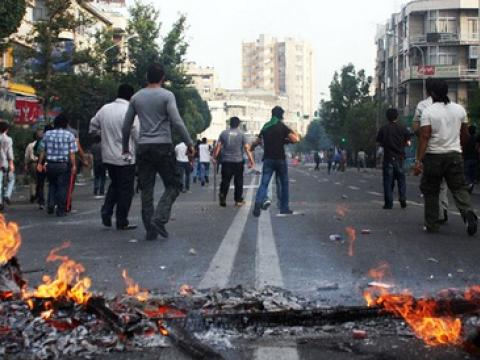 After the government declared a huge victory in the June 2009 elections, a wave of unrest over…

Organising efforts by the Syndicate of Workers Of Tehran and Suburbs Bus Company in the Vahed Bus Company have resulted in the dismissal of 17 union activists.