Josep Rebull, the POUM and the Spanish Revolution

A short article on POUM dissident Josep Rebull, his views and actions during the May Days and relations with sections of the anarchist movement.

19th of July, 2022 marks 86 years since the Spanish Revolution. Every year that passes is a new chance to reflect upon the successes and failures of such a grand moment in history. When we study history as revolutionaries we usually consider the balance of forces, economic factors, ideologies, organisations, culture and conditions in which something occurs. But sometimes particularly salient lessons become clear not when analysing the grand abstractions but the insights of particular figures active in momentous occasions.

Largely thanks to the work of excellent historian Agustin Guillamon, the figure of Josep Rebull has been rescued from obscurity. A militant of the Partido Obrero de Unificación Marxista (POUM) and the Barcelona local of Cell 72, Rebull played a unique and critical role in the organisation of the rank and file revolt during the ‘May Days.’ Rebull was a founding member of the POUM, joining when his organisation the Izquierda Comunista de España (ICE, Communist Left of Spain) merged with the Workers and Peasants Bloc (BOC).

The Spanish Revolution erupted as one of the most inspiring moments in history. In response to a fascist coup, workers took the initiative to spread economic collectivisation and the establishment of various degrees of workers self-governance. However the revolution did not resolve a fundamental contradiction – the skeleton of the bourgeois state was left standing.

The leadership of the revolutionary forces, the anarcho-syndicalist Confederacion Nacional Trabajador (CNT), the Federacíon Anarquista Iberica (FAI) and the POUM alike collaborated with bourgeois Republican parties rather than disbanding them. The new Central Committee of Antifascist Militias (CCMA) represented not only proletarian forces, but middle class Republicans and the Partit Socialista Unificat de Catalunya (PSUC) utterly loyal to the Soviet Union. It was under the banner of anti-fascism and desire to win the war that the state was slowly rebuilt.

By May 1937, many of the gains of the revolution had been rolled back. Collectivisation in the city was not only limited, the state even attempted to take control of socialised industries and subject them to appointed management. Furthermore the free-market in food and supplies had been reintroduced in Barcelona by the Communist Councillor for the Generalitat1 Juan Commorea, leading to price gouging by petty producers and near-starvation for many working class families. In the countryside, small peasants had been encouraged to return to individual farming and abandon the extensive communal practices. The various democratic militias of the proletarian political organisations were drafted into a ‘regular army’ largely under the command of the Communist Party, eliminating all autonomy and rank and file control.

On the 3rd of May, police officers of the Catalan government stormed the Barcelona telephone exchange collectively managed by CNT workers, sparking open revolt2 . Barricades quickly formed around Barcelona with the rank and file of the CNT-FAI and POUM on one side and the Republicans and Communists on the other.

Over several days of intense fighting the revolutionary once again virtually conquered the city. Something of a coalition had grown around the Barcelona FAI (opposed to the ‘higher committees’ of the FAI), the Defense Committees, the Friends of Durruti and the Local Committee of the Barcelona POUM3 . While all of these groups had vague ideas on how to proceed, they faltered over several days of street fighting.

Amongst the anarcho-syndicalists Rebull noted:

‘The Barcelona committees not only supported it, but also tried to coordinate it at the military level. But without having already agreed realisable political aims, they could not do this. Caught between the will of the base and the capitulation of the higher committees, the doubts and vacillations of these committees led in practice to a series of ambiguous and equivocal instructions4 .’

For the leadership of his own party Rebull was even more scathing:

‘All of the merit for the action belongs to the lower committees and the base of the party. The leadership did not edit a single manifesto or leaflet in order to orientate the armed proletariat.’

Ultimately the revolutionaries retreated, encouraged to preserve ‘antifascist unity’ by the leadership of all radical parties. But in reality they lacked clarity, conviction and confidence in the broadness of support for their actions. Even if the CNT-FAI-POUM had taken Barcelona, they would have been alone in not only Spain, but the world.

Rebull’s views on the course of action during the insurrection were unique and worthy of exploration. Prior to May, Rebull was already a critic of the POUM’s course of action. He had chastised party leadership for collaboration in the CCMA, pursuing the Popular Front strategy and bureaucratic manoeuvring that hampered party democracy.

Instead, the Barcelona Local of which Rebull was a leader had called for a ‘Revolutionary Workers’ Front’ that solidified the grassroots workers bodies as the organs of power. These largely consisted of the ‘Control Patrols’, the renamed CNT Defense Committees that were organised on a regional basis, workplace committees and in rural areas the local delegates councils. By the May Days, the concrete model would also include the active delegates representing the various barricades around Barcelona5 .

In charge of the POUM press, Rebull acknowledged that the marginal Marxist party would not be capable of calling significant numbers to the streets. So Rebull met with Jamie Balius, the journalist known as the mouthpiece of the Friends of Durruti (FoD). He suggested the FoD and Cell 72 issue a joint leaflet, however given the marginal size of the 72 Cell it was decided not to pursue that course of action. The FoD had already angered the leadership of the CNT enough – there was no reason to split Cell 72 from the mass of the POUM.

Instead, Rebull opened the POUMs printing press to the Friends of Durruti to publish their leaflets and the lists of demands which caused such a stir on the barricades. Rebull returned to trying to convince POUM leadership that with decisive action the revolutionaries could still win Barcelona.

Not only could they have taken certain key buildings, the anarchist masses were already in the streets, but

‘[the POUM] could have organised a Central Defence Committee, based on representatives from the barricades. For this it would have been enough to first have held an assembly of delegates from the POUM and some CNT-FAI barricades.’

From which he suggested would be elected a committee to coordinate a real unity of revolutionary forces. These would be formed ‘by means of the creation of Defence Committees in the workplace and the barracks.’ Here, in Barcelona at least, would have been the basis of a real workers power.

None of these recommendations were taken on board. In his article on Dual Power Rebull clarified the lesson made evident to Spanish revolutionaries:

‘If you look at reality, you must recognise the necessity for destroying the bourgeois state and replacing it with a new organ that has nothing in common with the state of the exploiters.’

Not only that the capitalist state had not been smashed, but the POUM, like many of the anarchists, had failed to understand how to keep the forms of dual power alive as proletarian forces were marshalled for a second confrontation with the state.

So it was by the end of May Rebull was to concede ‘The only group that tried to take a vanguard role was the Friends of Durruti.’ He was also astute enough to understand the POUM should have begun to operate underground, fearing imminent persecution. Ironically enough, POUM leadership (much like the CNT leaders) proclaimed May a ‘victory’, in that the workers showed they were still the ones who kept Spain functioning.

Within weeks, the POUM would be declared illegal, scapegoated as fascist agents by the Communists. Their leaders like Andres Nin were rounded up, jailed, tortured and murdered.

Thankfully Rebull managed to escape to France, where he lived into his 90s and remained a member of the POUM in exile. Rebull was one of the many mid-level activists and radicals who attempted to realise the potential of the Spanish Revolution, not just with slogans but concrete proposals.

I appreciate this, its the first time I've encountered a POUM member willing to criticise the organisation as a whole.

Everything else either attributes there misfortune to outside forces or individual personalities like Nin. 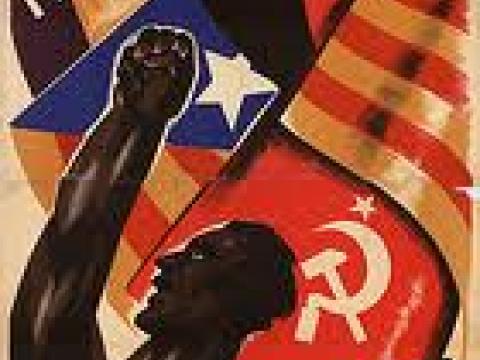 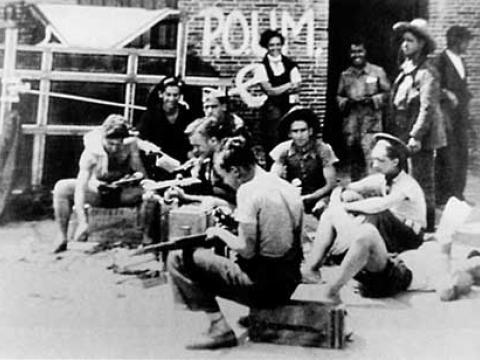 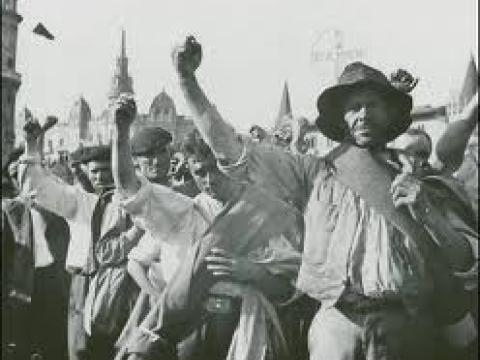 Was there a Spanish revolution? - Enric Mompo 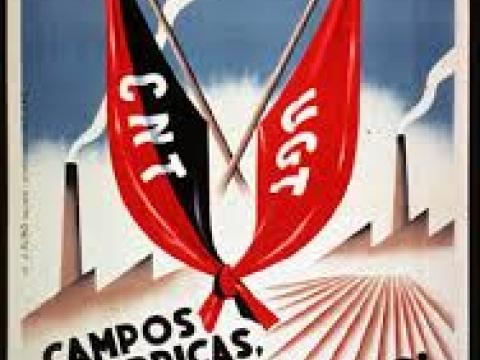