Kazimir Kovalevich and the Underground Anarchists

Kazimir Ivanovich Kovalevich was born in the Pinsk district of the Minsk province into a family of peasants in the 1890s. It is known that since 1916 he worked on the Moscow-Kursk railway section. It can be assumed that after the occupation of Pinsk by the Kaiser's army, the young worker was evacuated deep into Russia along with numerous other refugees. At the same time, Kovalevich joined an illegal anarchist communist organization, trying to organise a union of railway workers.

After the February Revolution of 1917, in which he participated, Kovalevich became one of the founders of the Moscow Federation of Anarchist Groups (MFAG) and its secretary. He was known as a “capable agitator and organiser” and had a pronounced literary talent. He wrote a lot for the newspapers Anarkhiia and Duma of Railworkers and was a member of the Railway Revolutionary Committee. Anarkhiia was first published by the MFAG in September 1917 as a weekly. Kovalevich spoke out against the Provisional Government of Kerensky and for the independence of unions from any political parties in various articles. Kovalevich was also known under the underground name as Efim.

In autumn 1917, he was elected to the Central Committee of the All-Russian Union of Railway Workers which he had helped to create. He took an active part in street battles during the October Revolution in Moscow, organising the arrival of the Red Guard units in the city. After a short time, he was bitterly disappointed in the new Bolshevik government. Anarkhiia stopped publication during the October Revolution, but re-appeared as a daily newspaper in March 1918. It included a cultural section with contributions from avant-garde artists, including Alexei Gan, Malevich and Rodchenko. It fulminated against the Brest –Litovsk treaty and the Bolshevik government’s acquiescence to the German government. It closed down after 12th April and the Bolshevik raids on anarchist centres in Moscow and Petrograd. However, it reappeared a fortnight later but ceased publication on 2nd July 1918 due to Chekist repression.

Kovalevich had disagreements with other members of the MFAG over his plans to carry out underground work against the Bolsheviks, but found common cause with Witold Bzhostek. Kovalevich first "hid" in the brigade of Makhno, which was an integral part of the Red Army at the time, in spring 1919, and then joined Maria Nikiforova’s unit.

When the Bolsheviks broke their alliance with the Makhnovists in June of that year, Trotsky ordered the arrest of the Makhnovist headquarters officers and this was carried out by Voroshilov and the Melitopol Cheka, Makhno himself narrowly avoiding arrest. They were summarily executed on June 17th. Their numbers included some of the most active Makhnovists, including Burbyga and Mikhailov-Pavlenko (the latter a Petrograd anarchist who came to put his engineering skills at the disposition of the Makhnovists) Ozerov, chief of staff of the Makhnovists, and several members of the Makhnovists Revolutionary Military Soviet, Olezhnik, Korobko, Kostin, Polunin and Dobrolyubov. Kovalevich and other anarchists among the Makhnovists like Yakov Glazgon were appalled. They decided to avenge these murders.

Lev Zadov, a leading light in the Makhnovist counter-intelligence, much later gave a statement to the Cheka that Makhno convened a meeting at the Bolshoi Tokmak station after the shootings of the Makhnovists, which was attended by Kovalevich, and that Makhno agreed to supply funds for the establishing of underground networks in Moscow. Whether this is true is debatable. On one hand, the Cheka were adept at extracting false confessions thanks to their refined torture methods. On the other hand, Kovalevich, Sobolev, Grechanikov, Glagzon and Tsintsiper had been involved in the Makhnovist counter-intelligence Kontrrazvedka.Vyacheslav Azarov goes into some detail about this in his book on the Kontrrazvedka and believes the latter theory to be true.

Kovalevich and his comrades first moved to Kharkiv, intending to kill Rakovsky, Piatakov and other Ukrainian Bolshevik leaders, before deciding to hit the centre in Moscow. Kovalevich arranged a network of safe houses in the capital, and re-established links with railway workers sympathetic to anarchism as well as setting up an underground printshop. Together with Petr Sobolev he founded the Moscow Organisation of Underground Anarchists (MOAP). Sobolev was active in the combat section of the MOAP whilst Kovalevich headed up its literary group, penning many of its proclamations, leaflets and two issues of Anarkhiia. Sobolev had been a close comrade of Witold Bzhostek. At first, it was hoped to create a mass movement among workers, and to establish free soviets. Bolshevik repression made this impossible and the MOAP turned to terror tactics, to attack the “executioners of the revolution” and proceed to “the general proletarian struggle”.

Kovalevich established links with Maximalists and the extreme left of the Left SRs who also wanted vengeance for party comrades shot by the Bolsheviks. This left SR grouping was led by Donat Cherepanov, who had moved to a quasi-syndicalist position. He had been expelled from the party by the central committee and believed that “all power must be transferred to the trade unions, which, through comradely discipline, will be able to raise the productivity of labour to the degree necessary at the present moment... These or other associations of trade unions will be organs of power, and the All-Russian Union of Trade Unions will be the supreme organ of power.”This alliance received the grandiose name of "All-Russian insurgent headquarters of revolutionary partisans". A number of expropriations were carried out against State banks in order to finance propaganda, in Moscow, Ivanovo-Voznesensk, Tula and other cities, amassing large sums. At first it was intended to kill Felix Dzerzhinsky, the Cheka leader, and to dynamite the Chekist HQ in Moscow. However, they concluded that Dzerzhinsky and the Cheka were just an “instrument” in the hands of the party leadership. Therefore, what was needed was to cut the “head off” not beat on the hands.
An opportunity for this presented itself. A regional meeting was scheduled to meet on September 25th, 1919, at the Bolshevik Moscow committee in Leontievsky lane with the presence of many Bolshevik leaders including Lenin. Cherepanov was well acquainted with the building in question, as it had served as the national and Moscow HQ of the Left SRs.

On the day Petr Sobolev threw a powerful bomb just as the meeting started but before Lenin arrived. Twelve Bolsheviks, including the secretary of the Moscow committee, Zagursky, were killed, whilst 55 others were injured, including top leaders like Bukharin, Pokrovsky, Stieklov, Yaroslavsky, Shliapnikov, and Olminsky.

It was originally thought that the bombing had been instigated by opponents of the Bolshevik regime from the right. Dzerzhinsky immediately ordered the shooting of prisoners in the Moscow prisons, regarded as representatives of the old regime, and including Kadets (Constitutional Democrats) professors, artists, scientists and members of the intelligentsia, princes and counts of the aristocracy. Hundreds were shot in mass executions.

However statements written by Kovalevich soon began to circulate. The attack was claimed by the All-Russian Insurgent Committee, in the name of the Third Social Revolution. It was stated that it had been carried out to avenge the Makhnovists shot on June 17th and that the immediate task was “to wipe the regime of the commissarocracy and Chekas off the face of the earth and establish thereafter an All-Russian and free federation of unions of toilers and oppressed masses”. Two issues of Anarkhiia appeared, with a print run of 3,000, as well as the leaflets “No Time to Lose”, “The truth about the Makhnovshchina” and “Where is the way out?”

It was stated: “You are in power in Russia, but what has changed? The factories and the land are still not in the toilers’ hands but in that of the boss-State. Wage slavery, the fundamental evil of the bourgeois order, is still in existence: as a result, hunger, cold and unemployment are inevitable. On account of the ‘need to put up with everything’ for the sake of a better future, and to ‘defend’ that which is already won, a huge bureaucratic machine has been set up, the right to strike abolished, and freedoms of speech, assembly and the press have been stamped out...
It is our belief that you, personally and subjectively, may have the best of intentions: but objectively and by nature you are representatives of the class of bureaucrats and functionaries, of a band of unproductive intellectuals.”

The Cheka began staking out flats known to have been used in the past by anarchists, Maximalists and Left SRs, including the old apartment of Marusya Nikiforova. Kovalevich was discovered there on November 1st, and in the ensuing gunfight was mortally wounded. A few days later, Petr Sobolev died under similar circumstances.

On November 3, one of the underground anarchists, Mikhail Tyamin, was arrested and finally revealed information about a dacha in Kraskovo. The Cheka surrounded the dacha, where Glazgon, the bomb maker Vasily Azov (Azarov) Mitya Khorkov, Zakhar (Khromoy, The Lame) and two women, Tatiana Dedikova, the partner of Azov-Azarov, and Mina (no other name given) were holed up. Gunfire broke out and then a bomb was set off by those inside, totally destroying the house and killing its inhabitants.

Later, after confessions were extracted from them, eight other members of the anarchist underground were shot by the Moscow Cheka in December 1919. These were Mikhail Grechanikov, (an anarchist who had fought with the Makhnovists) Khilya Tsintsiper (real name Isaak Bramson) Alexander Dombrovsky, Alexander Voskhodov (aka Popov), Fedor Nikolaev (Left SR), Pavel Isaev (printer of Anarkhiia), Leonti Khlebnysky (aka Prikhodko, aka Uncle Vanya) and Alexander Baranovsky (aka Popov).

As to Cherepanov, he was not captured until February 17th 1920, along with his partner Tamara Gasparyan (whose real surname apparently was Azaryants and a leading member of the Petrograd Left SRs). Cherepanov was personally interrogated by Dzerzhinsky, who was told:”Of course, one must only regret that the victims of the explosion were not prominent party workers and none of the major ones were injured. This act, in our opinion, was supposed to revolutionise the masses and indicate the path that real revolutionaries should follow: the path of terror ...In response to the remark that many insignificant workers were injured in the explosion, I will point out that your Cheka is no better in this respect.... One thing I regret: when I was arrested, they grabbed me from behind, and I did not have time to shoot your agents.
What is happening now is a complete Robespierrade!”

The Red Book of the Cheka which has much information about the Leontievsky bombing fails to mention what happened to Cherepanov. The Chekist Latsis claimed that he died of typhus whilst in prison, but other accounts say that he and Gasparyan were strangled in their cells by Chekists.
The repression unleashed by the Bolsheviks against those to their left, the Anarchists, Left SRs and Maximalists, meant that some turned to the use of terror against their persecutors. But how could the use of bombs and dynamite end the Bolshevik dictatorship and bring about the free federation that Kovalevich wrote about? The regime was able to use the Leontievsky bombing to increase their persecution of their enemies to their left. The anarchist Lev Chernyi, who knew the underground anarchists and objected to their methods, was one of those who was framed in a Cheka set up two years later and shot. All over Russia Anarchists were persecuted, imprisoned and executed. Kovalevich and his comrades could not stop the Bolshevik counter-revolution that moved on to the suppression of the Kronstadt uprising in the same year that Chernyi was murdered.

A short biography of Vasily Babeshko, Socialist-Revolutionary, then Anarchist-Communist 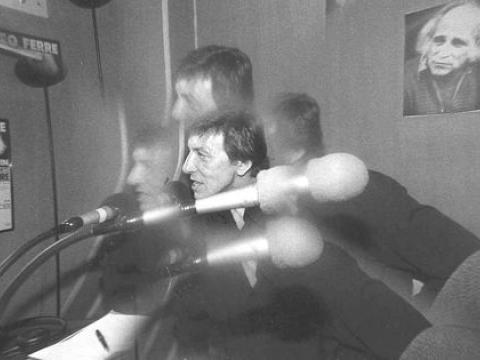