Mutual Self-Defense in the Time of Death Cults and Genocide

It hurts me to write this. We live in the time of death cults and genocide. Hospitals and nursing homes are being targeted by white supremacists animated by medieval conspiracies of Jewish people spreading disease. Asians are attacked on the streets and in grocery stores for similar reasons. Lynch mobs form to attack Black people in their homes and while they jog through a neighborhood (Ahmaud Arbery). Arrests and “crime” is down and yet extrajudicial killings by the police of Black people, such as Breonna Taylor who was shot in her own home, remain ever high. The federal government sends body bags instead of medical supplies to reservations. America’s concentration camps have transformed into death camps. With every year there has been an escalation of violence by vigilantes and the state against the people. We commonly refer to these as “hate crimes”. The COVID-19 bio-economic crisis has only heightened the pre-existing bigotries of a settler colonial empire built on centuries of repeated ethnic cleansings and genocides. Protecting the people has become an ever increasing need.

Without an organized self-defense our chances of surviving this pandemic becomes slim. The fascists and their accomplices in the government organize towards our collective annihilation. Every day conservative pundits in the media demand a mass sacrifice to the market through early reopenings to “save the economy”. All the while COVID-19 tears through whole communities. We are in the middle of multiple concurrent genocides and I’m afraid we are only a few steps away from Final Solution type actions. The masses, the working class, the vast majority of people on this planet and in this country are under siege. If we are not properly prepared and take the necessary precautions there will be an event so horrific and on a scale so momentous it will eclipse all the terrors of the past few centuries combined. We are facing an enemy that openly worships death - which sacrifices its own members through public rallies and demands a larger sacrifice of the masses through early ill advised reopenings. Who do you think would die under these reopenings? The wealthy and the politicians with their stockpiled medical supplies? No. It would be us. Everyday people who have to work for a living. This is a war being waged against us and we have no army.

We enter a global depression during a pandemic likely triggered by the same earth destroying processes that’s leading us toward climate apocalypse. In the near and long term this will mean food and water scarcity, an increase in imperialist conflict over land and resources, an increase in the divide between rich and poor, and entire communities further decimated and destroyed by poverty. Roving bands of death squads, vigilante or otherwise, are already a reality; we just haven’t named them as such. We live in the time of death cults and genocide. Is this really the future we want to inhabit? Is this really the present we wish to be reality?

Our primary task must be to not only protect ourselves as individuals or even merely as part of our own isolated communities. In order to survive we must rely on the principles of solidarity over fractured isolation, internationalism over nationalism and mutual self-defense over isolated defenselessness. Mutual self-defense is the principle that the working class can only survive through protecting each other across different nationalities, ethnicities, sexualities and other markers of “otherness”. It is community self-defense at the next stage of organizational development. It must be the goal of any and every communist to defend the sick, the elderly, the young and the disabled. Furthermore it is absolutely required that we build solidarity and autonomously but unitedly aim to protect each of our communities. Together we easily outnumber the fascist enemy and can organize and mobilize far greater amounts of people towards self-defense if we follow these principles in our organizing. I’m afraid that without these principles we will not only be lost in our organizing of the masses but we will lose. Failure is not an option as it will mean millions of deaths and a wave of destruction like we’ve never seen before in history. This will require we also work outside the bounds of the national territory and build an international working class mass movement against fascism. Fascism in the 21st century is not restricted to a few countries but encompasses large portions of the world at this time. From Brazil to England, the Philippines to Turkey, Hungary to Germany, France to Ukraine we are seeing fascism arise stronger than ever. If we take the lessons of the 20th century seriously then we must begin to develop organizations and alliances which allow for solidarity, internationalism and mutual self-defense. We are doomed otherwise but with the strength of the people behind us anything is possible. For all our sakes we must unite. We only have our chains to lose and an entire world to gain.

Then they came for me
And there was no one left
To speak out for me “
- Martin Niemöller, 1946

Great post!
Would be easier with Gun laws in America than Europe but it's a question that needs to be posed.Libertarians and Anti Fascists need to defend our Class by any means necessary
Ryan and where plausible. 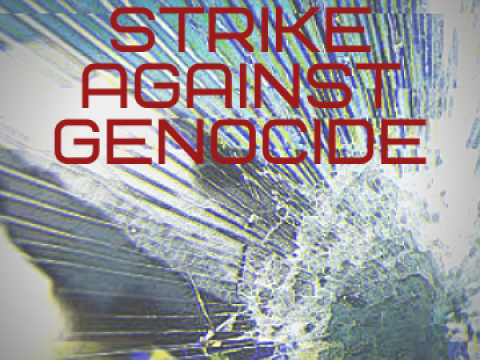 The STRIKE AGAINST GENOCIDE Manifesto

With the decline of the economy and the rise of mass strikes we have the ability to glitch the system and push substantive demands. As the…
Image

Introductory Draft of (((The Conspiracy))): A Political Economy of Antisemitism, Crisis and the Socialism of Fools