No to the draft! Maria Occhipinti and the Ragusa revolt of January 1945

A short account by Meno Occhipinti of the Ragusa revolt, and the role Maria Occhipinti played in it.

On 25 April we Italians mark our country’s liberation from the Nazi occupation, that being the date when Milan was liberated and the occupiers driven over the borders. But Italy’s liberation was no overnight affair, nor was in over in a few days. Parts of our country were “liberated” well before 25 April 1944.

Allied forces landed in Sicily on 10 July 1943 and rather easily and quickly managed to fight their way up the peninsula as far as the gates of Rome.

The Cassabile armistice on 8 September [1943] had led southerners to believe that the war was over and so every serviceman felt that he was within his rights to quit his unit and head for home.

Plainly this was only an illusion because between late November and early December 1944 postcards started to arrive ordering all young men between the ages of 20 and 30 to report to their military districts in order to rejoin the fighting, this time on the side of the Allies and against the Nazis, in order to liberate the rest of Italy.

For a young man, being called up to the front at a point when your country is at war is probably a normal enough thing and is accepted just because that is the way things are. Heading for home in the belief that it is all over, reimmersing oneself in civilian life and then, within a few weeks, listening to talk of picking up “mess kit, spade and blanket” to rejoin the fighting struck most of the ex-soldiers as unacceptable. So virtually all of those called up turned a deaf ear and carried on with their new lives.

But you know, when the country calls, a man must answer the call and if he does not, the State’s summons turns that much more forceful. In this case the State sent in the carabinieri to search out the draft-dodgers house by house.

The Sicilian and the southerner generally is not much given to grandstand opposition. The old saying “caliti juncu ca passa a china” (grin and bear it) fairly sums up the temperament of southerners.

This time, though, this was not the case, for only 20% of those called up reported to the district offices. The remainder took to the hills or made themselves scarce, hiding from those who intended to send them back into the front lines, especially in south east Sicily, where they had help from the local women and older folk.

In Ragusa, some who received their call-up cards pretended that they had not: some, seeing the carabinieri arrive, went into hiding; others, realising that hiding would do no good, fought to resist the draft.

The revolt in Ragusa (and its province), described as the “refuse the draft” revolt was shortlived and a 23 year old woman in the fifth month of her pregnancy became its protagonist and symbol.

Maria Occhipinti, for such was her name, was born in Ragusa on 29 July 1921. She had had three years of elementary schooling and then, as was common practice in those days, she had quit school to go off and train as a seamstress.

Ever since her adolescent years she had felt different from her contemporaries but, even so, she married at the age of 17 and lived a life much the same as so many other women of her day.

The war and her husband’s departure for the front had changed her whole life: she started to go out and to deal with matters that had formerly been the concern of her husband. She had started to educate herself again, had started to read (Victor Hugo’s Les Misérables had opened her eyes to the lot of the disinherited) and had caused something of a scandal by joining the Camera del Lavoro (Chamber of Labour) and the Communist Party, refusing to kowtow merely because she was a woman.

Then the war had ended and the soldiers started to come home and then the draft cards had started to arrive.

The young men who had just returned home had no desire to set off again and the women, albeit not knowing how, were keen to hold on to their husbands and sons. There were discussions on every street corner and rallies were held in the city squares to shouts of “We’re not cannon-fodder!” Maria Occhipinti was frequently sounded on her opinion of this or that suggestion of ways of dodging the draft.

At around 10.00 am. on 4 January, she was at home when she heard screaming from the local women. “Come out, come out, come out on to the street, you who know how to talk, you who can make yourself heard and have courage. Come and see the big truck ferrying away our children!” The truck was a large army truck into which all of the young men who just happened to be in the artisans’ workshops at the time were being bundled. Maria approached the carabinieri and tried to persuade them to let the young men go. But the goons (as she calls them in her book Una donna di Ragusa published in 1957 by Luciano Landi Editore and reissued by Feltrinelli in 1976 and by Sellerio in 1993 and from where the quotations used in this article have been lifted) refused to budge, so Maria Occhipinti threw herself down on the ground in front of the wheels of the truck and said: “You can kill me but you shall not pass.” One of the soldiers said they should run her over because orders were orders. In the meantime other people drawn by the hubbub had approached the truck and in no time at all a huge crowd had surrounded it. The authorities, fearing the worst, had ordered that the youngsters be freed and the latter made themselves scarce.

Occhipinti’s act spread around the place like wildfire and by that evening lots of people were dropping by her home to thank her and she was the talk of the town.

The following day, a sexton had the effrontery to ask an officer why on earth they were redrafting the young men when they had had their fill of the war by then. The officer’s only response was to draw a grenade from his pocket and to throw it at the sexton, blowing him to pieces.

That was the trigger for the revolt. Weapons appeared everywhere and the so-called “a Russia” district was overrun by the rebels whilst the police controlled the rest of the city.

On the morning of 6 January 1945 a band of rebels mounted a blitz against a roadblock on the road into Ragusa. The fighting lasted into the afternoon before the soldiers surrendered.

The news spread around the province and the revolt spread to towns like Comiso, Vittoria, Giarratana, Monterosso and Agrigento.

In Ragusa, after some initial celebrations by the rebels as the military were routed, the fighting resumed and the numbers of dead and especially of the wounded began to grow.

Aside from police headquarters and a few other buildings, the city was now in rebel hands. However on the afternoon of 7 January, further army reinforcements arrived from outside and by 8 January order had been restored.

The rebels were arrested; some managed to escape and over several days the troops did as they pleased in the city. Maria Occhipinti was arrested a week after that and was interned on Ustica where she gave birth to her daughter Marilena before she was moved on to the Benedettine prison in Palermo.

The revolt in Ragusa province claimed 18 lives and left 24 wounded among the carabinieri and troops and 19 lives and 63 wounded on the rebel side. 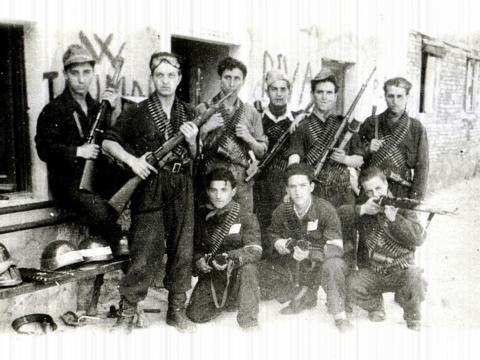