On March 21st in New York City, a large, raucous march from Union Square set out to confront police harassment and the murder of black youth at the hands of cops and racist thugs. Max Schwarz points to the possibility that this could be an opening where the activism of Occupied Wall Street combines with the militancy and anger of the city's working class black community.

The weather in New York City has been unseasonably nice this past week. The cherry blossoms are blooming, the breezes have been warm and New Yorkers are exiting (as much as they ever do) their surly winter funk.

But despite the fine weather, darker forces are afoot. Tragedy stalks the city from Wall Street all the way up to 229th Street in the Bronx. As it happens, the everyday laconic misery of millions of New Yorkers is sometimes punctuated by a certain local event; one that rebounds down streets and echos around minds because it perfectly captures the grim, violent horror of this fucked up social system built on inequality, exploitation, repression and racism.

On February 2nd, 2012 in the Bronx, New York City, an unarmed black youth named Remarley Graham was shot in the back in his own bathroom by police after they busted down his door looking for a trivial amount of marijuana. Graham was murdered by the cops. Because he was black the pigs will get away with it. The sad truth is that this kind of thing happens all too often in this utterly class-divided and segregated city with a militarized, racist police force that has a budget larger than the military expenditures of some small countries.

The outrage over these incidents is palpable in black communities. Add to this the daily indignity of the NYPD stop-and-frisk protocols that put over 580,000 people (mostly black and Latino) up against the wall and searched for the apparent crime of being young and a person of color. Less than 1% of these folks were held for anything, but the city claims that this daily harassment of working class people in impoverished neighborhoods is justified by falling rates of violent crime.

But this is not just a New York City problem. Across the country, the incarceration of so many working class people (mostly black and Latino) is evidence of a 'New Jim Crow' system that is foreclosing on the lives and aspirations of millions, just as the banks are foreclosing on millions of homes. And the murders of people of color continue, unprosecuted and unabated.

On February 26th, 2012 in Sanford, Florida, a young, black, A-and-B student named Trayvon Martin went to the local store on a rainy night to buy some candy and an iced tea. On his way home to his gated community he chatted with his girlfriend on his cellphone. When the rain started to pour, Trayvon put up his hood against the elements and took shelter under a neighbor's awning until the storm passed.

A man named George Zimmerman, a self-appointed 'neighborhood watch' member, viewed Trayvon from his SUV and immediately called emergency services. He claimed that the teenager looked suspicious (he was wearing a hood) and that he appeared up to no good (undoubtedly because he was black). The police told Zimmerman to stay in his car, but George decided to go full vigilante on this innocent young man unfortunate to be at the wrong place at the wrong time.

Zimmerman was armed with a pistol. He left his truck and confronted Martin. A scuffle ensued (captured on Trayvon's girlfriend's cellphone) and seconds later young Martin, who was guilty only of the crime of Walking While Black, was shot in the chest. He died almost instantly.

As it turned out, the Sanford police saw nothing amiss in this episode. In fact, they did background checks and drug analysis on the dead teenager, but let Zimmerman go without question. For several weeks the Sanford PD refused to investigate the incident and it took a massive outcry across the country for the Justice Department to finally call for a Grand Jury hearing to find facts on the death of 17-year-old Trayvon Martin. Meanwhile, the anger has gone national.

On March 21st a group of thousands converged on Union Square park in Manhattan to protest the death of Trayvon Martin and to point to the systemic nature of police violence towards people of color. At the same park, just the night before, police had evicted dozens of Occupy Wall Street protesters who had in turn occupied Union Square after their violent eviction from Zucotti Square - the scene of 73 arrests. Tonight in Union Square, there was a convergence of two movements that had been largely separate up until this time.

Occupy Wall Street is a burgeoning (if still somewhat incoherent) populist movement against high finance and inequality. At its best moments it shades towards anti-capitalism and confronting the very state that guarantees the basis of the profit system. At its worst moments it is caught up in all sorts of misconceptions about the locus of power in class society and the role of the police in enforcing property and squelching dissent. The anti-police movement in NYC has seen powerful moments in the recent past, with marches and campaigns against stop-and-frisk and extra-judicial police murders. Still, there is a tendency to call for certain policing reforms that, even if they were to succeed, would not confront the legacy of brutality visited upon working class people of color on the streets, on the job and in their daily lives.

Occupy Wall Street protests and encampments have been conspicuous in their lack of diversity. But as this spring has finally sprung, we may be finally seeing an overcoming of the failure of Occupy to address the concerns of the over 50% of New Yorkers who are immigrants or people of color.

Talking to all my comrades after the march tonight, each one agreed that this was the most powerful congregation of the working class yet seen in New York City. After a series of speeches, including a very touching and heart breaking statement by the Martin family who flew up from Florida, about 3000 people set out from the park. There were occupiers, teenagers, older folks, blacks, whites and Latinos. What united us all was our anger at a fucked up city and a fucked up world where, on top of our everyday exploitation at the hands of bosses, the least powerful among us are killed with impunity by cops and thugs.

The march took the street immediately, the thousands easily overcoming the concerted attempts of the NYPD to keep us on the sidewalks. We blocked traffic on 14th street, Broadway, 6th Avenue and 23rd street. Every time the cops would come with scooters and vans we would dodge them with shouts of, 'Who's streets? Our streets!' For many of the people on the march this was the first time they had felt the solidarity and inchoate consciousness that comes from blockading whole parts of the city with thousands of others with the same anger and same determination. People hopped on top of taxis. They banged on trash cans. They cheered every time another police line was overcome and the streets opened up before us. Many of the drivers along the way beeped in solidarity and at least one Amalgamated Transit Union bus driver raised his fist while pumping out the rhythm of our chants on his horn.

We got to One Police Plaza - famously known as 'The Tombs' - and jumped over the barricades that surrounded it. Meanwhile, dozens of people began filing up the roadway to the Brooklyn Bridge in what could have been a repeat of the mass arrests of last fall. Cooler heads prevailed and the suicide mission was aborted, but not before hundreds stood in the Financial District yelling, "No justice, no peace; fuck the police!' An attempt was made to get back to Zucotti, but there were too many cops in riot gear to even think about retaking it. Eventually the crowd thinned out and people took the subway home.

This was the most exciting and energizing march I've been on the whole of the Occupy movement and maybe ever in NYC. It was invigorated by a sense of immediate moral revulsion at the death of an innocent child. It brought together swaths of New Yorkers who had never interacted much with each other and never shared in their common anger. It brought out tons of militant kids - white, black and Latino - who are fighting their own struggles around deteriorating conditions in the projects, police harassment and the jobs crisis brought by the most recent crisis of capital.

Will the convergence of Occupy Wall Street and the Million Hoodie March mark the beginning of a new, broader phase of the movement in the US and abroad? Can we sustain these connections and turn them towards bigger goals like the proposed general strike on May 1st? It is hard to tell. All I know is the power I saw glinting in people's eyes as they let out a big collective 'fuck you' to the NYPD, our billionaire mayor and the whole exploitative, racist system that so many habitually confront alone.

The spring is upon us and this movement looks like it's back on the offensive.

The sad thing is, if Zimmerman the wannabe cop would have been Officer Zimmerman Sanford PD, he'd get away with killing Trayvon. The cops murder innocents all of the time and get away with it. My city of Fresno, CA is REALLY bad. I swear, there's an officer involved shooting ever week. Google it. 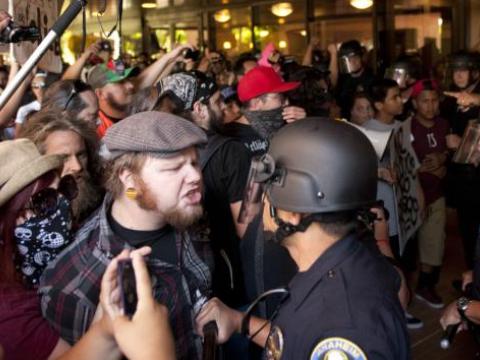 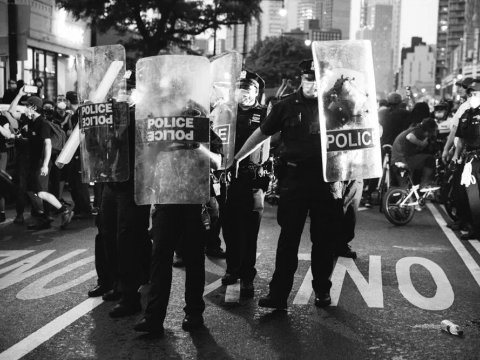 Jarrod Shanahan looks at the state response to the George Floyd Rebellion, and the challenges faced by the NYPD when attempting to pursue a… 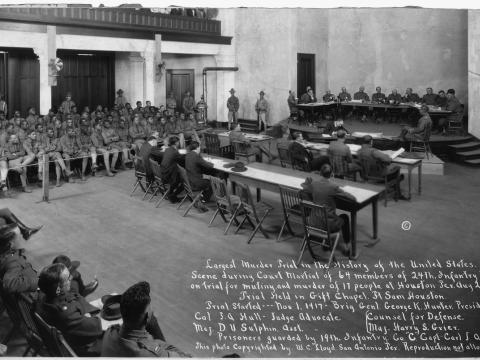