Article from Bilan nr. 28, March-April 1936, examining the political situation in Spain and the victory of the Popular Front in 1936, in relation to the Spanish agrarian question.

The centrist press is jubilant. The Socialist, democratic and Antifascist press more or less echo them. The "Popular Front", new name for an old product, the left coalition, has triumphed today in Spain! Tomorrow it will triumph in France. In Italy it is being taken into account as a possible transitional solution.

Sure, we don't dispute the victory in Spain, nor the possibility of a similar victory in France, nor that things might even be manoeuvred in that direction in Italy.

But the problem is this: the victory of a 'Popular Front', does it – certain apparent advantages aside – really signify a genuine success for the working class? In the final analysis, is it not just another negative and confusing factor to add to all the others which are currently demoralizing and disorientating the working class on an international scale? Is not the aim to bind the proletariat ever more tightly to the Bourgeoisie, be it fascist or "democratic", in expectation of war?

On 16 February 1936, the Spanish people was called to vote in the elections for the third time since the municipal elections of 12 April 1931 which had precipitated the fall of the Bourbon monarchy.

The Republic which was proclaimed two days later was, as we know, the "Workers" Republic. Although it was constitutional, in actual fact it was a popular coalition of Republican socialists with the provisional government of Alcala Zamora; to be precise, with the government which emerged from the Constituent Assembly elections in June 28, 1931, and which was to direct the destiny of the country for the next thirty months.

If, today, we analyze the function of these governments, similar in their political composition and personnel to the one Azana has formed, we can say, without any hesitation, that these first Left governments had the historical function assigned to all democratic government since the war, i.e., smoothing the road to the October 1934 counter-revolution.

What was the fundamental problem that needed to be resolved in a feudal-agrarian Spain? The "Agrarian reform", this reform which once disturbed the sleep of the "great" bourgeois revolutionaries in France in 1789 but which their epigones, in 1931-33 Spain, have by and large carefully avoided facing, contenting themselves with pulling the wool over the eyes of the rural population instead.

It can be imagined how difficult it is to obtain reliable statistics on landed property – especially for Spain – but the following table shows roughly how the land was divided.

In the twelve provinces most affected by the agricultural reform – where the average earnings of an agricultural worker are 2 to 2½ pesetas at the most per day – 10,000 landowners own 8,200,000 hectares; that's to say, 69% of the total area and this land is either only partially cultivated or not cultivated at all. Meanwhile, out of the 800,000 peasant families, only 100,000 own enough land to support themselves from their own labour. As for the land which belongs to the old Spanish Grandees, which was supposed to be simply expropriated (a measure taken following the monarchical pronunciamento of August 1932) they were only hit by a temporary measure.

The demagogic significance of the agricultural reform was to create millions of new proprietors; to give work to the immense multitude of agricultural labourers; to make wasteland productive. In practice the agricultural reform, which became law in September 1932, only provided for the alienation of the worst land and – naturally – on mortgage terms. Enforcing it, moreover, was accompanied by conditions such that, according to the calculations of a Bourgeois paper, it would take 1700 years to put the landless peasants in possession of their parcel of land. And when the Spanish agricultural proletariat – in response to this shady deceit – launched a series of violent strikes and occupations of the land in 1931, it was the Left government which pursued a policy of bloody repression, whose culminating point, in January 1933, left similar cases in December 1933 and October 1934 with little to envy.

The Socialists, headed by the "Spanish Lenin", Largo Caballero, by their silence made themselves accomplices in the Casas Viejas massacre, that is to say a cowardly assassination of unarmed workers and prisoners.

Thanks to this policy of the Left, the forces of reaction had meanwhile been gathering their strength. Now they could go back on the offensive: the Radical Party was their main instrument, which by provoking the dissolution of the Cortes and causing the consequent elections would lead to the defeat of the Left Parties. The Socialists would win only half their former seats and Azana would return to Parliament with only four of his supporters.

Thus [in November 1933], the political destiny of the country passed into the hands of a reactionary coalition composed of Gil Roblès' supporters and Lerroux's Radicals, that is to say, the agrarian and industrial "pro-fascists".

Brutal repression, suspension of Catalonian law, the reinstatement of Monarchist generals into the army, repressive anti-worker legislation, increased censorship, the declaration of a permanent state of siege in certain provinces; that was to be reaction's balance sheet by October 1934. We know how [in October 1935] the 'straperlo' gambling scandal, which exposed the enormous corruption within the Radical party (the thieves party par excellence), brought about Lerroux's downfall and the break up of his party. But as the Radical Party was part of a governmental coalition with Gil Roblès' party, only two possibilities remained: either power would go to Gil Roblès' clerical party, or a transitional government would be appointed and the Cortes would be dissolved.

It was the latter solution that prevailed and [in December 1935] the Portela Valladares cabinet was formed.

The electoral campaign would be fought under the banners of the "Popular front" and of the coalition of right-wing parties. The latter was above all based on the alliance between Gil Roblès' CEDA and Calvo Sotelo's monarchists, on the agrarians, on Lerroux's radicals, and on Cambo's "Catalonian League". This right-wing block envisaged a revision of the constitution (which it thought too progressive), the restoration of religious education, the stifling of all class struggle, and the most absolute respect for property rights.

On the other side, the Popular Front had acquired its maximum extension, ranging from Azana's Republican left, from Martinez Barrio's dissident radicals to the Socialist Party, the Communist Party, Pestana's Syndicalist Party and the Worker's Party of Marxist Unification [POUM], formed from a fusion of Maurin's old Workers and Peasants Coalition with Nin's Trotskyists).

The Popular Front called for a general amnesty and the repeal of all the repressive laws adopted by the rightwing governments.

Not having been able to reach an agreement on the agrarian reform, as regards nationalization of the land and its free redistribution to the peasants, because of opposition from the Bourgeois parties, the Popular Front came up with a compromise on the basis of a set of minimum demands: reduced taxes, lowering of extortionate rents and fees, increased agricultural credit, and a significant revaluation of agricultural products. The program also contained a vast plan of public works to absorb unemployment and also Labour Laws, which, for example, set a minimum wage.

13,187,311 electors including 6,843,426 women, that's to say more than half a million more women than men, were to elect 473 Members of parliament on the basis of a majority electoral system which assigned 80% of the seats in each electoral district to the party slate which obtained a majority (even if only a relative majority).

Even if at first sight the success of the Left seems inexplicable, in fact there is nothing extraordinary about it. The left had a majority of the votes in the November 1933 elections as well, and it was only because it had gone to the polls more divided than the right that it lost so many seats.

This time the "Popular Front" had the overall support of the Anarcho-syndicalists, including not only Pestana's Syndicalist party (which had joined the "Popular Front"), but also the mass membership of the CNT. During a big meeting at Saragossa, several CNT leaders maintained that the organization would remain apolitical, but if individual members wanted to they could vote for the "Popular Front".

The Regional Committee of Barcelona, headed by the Federation of Iberian Anarchists (the same lot who, in October 1934, in good anarchist, 'anti-authoritarian' fashion, had ordered the masses back to work without consulting them) called meetings to discuss the electoral question. Although it originally proposed only to 'moderate' the abstentionist position, it would end up, two days before the elections, by inviting the members of the CNT to vote for "Popular Front" candidates, who had an amnesty in their program.

Immediately after the first results were in – and without even waiting for the results of the second ballot on March 1st, which would have decided forty extra seats – Portela Valadares' government resigned and Azana formed the new "Left" government.

Those were the first two outcomes of the victory of the "Left-wingers". Something is going to be done for the unemployed (although officially there are 704,000, in fact there are more than a 1,000,000 out of an active workforce of 5,000,000), 60% of whom are workers from Andalusia and Estremadura, both areas of large landed estates where the famous "agrarian law" is supposed to become effective; a law which doesn't even aim to prevent the landowners from continuing to drive out thousands of the small farmers who used to work for them.

If some right-wingers thought it prudent to cross the frontier during the first moments of exhilaration after the elections, they could do so in the certain knowledge that they'd soon be recalled by the "Left-wing" government, same as the first one, which recalled monarchists and priests after April 1931.

The very fact that the Bourgeoisie has restored power so readily to Azana and to Companys proves they know they have nothing to fear from the men of the "Left", who in 1931-33, as a Republican/Socialist coalition, brutally suffocated the Workers' movement and allowed the counter revolution to consolidate and take back power, which led to the October 1934 massacres.

The fact that in 1936, after this conclusive experience, as far as Democracy's function as a way of maintaining Capitalist control is concerned, it is still possible, as in 1931-33, to get the Spanish proletariat to line up behind a plan which isn't based around class, but defence of the "Republic", of "Socialism", of "progress" against the forces of Monarchy, clerical fascism and reaction, shows the profound disarray of the workers in this Spanish sector, where proletarians have so recently given proof of their combativity, and of their spirit of sacrifice.

Centrism bears a heavy responsibility which is minimized neither by its organic weakness, nor by the cretinism of the leaders of its Spanish section. The fact of having contributed to drawing Spanish workers onto the terrain of the binomial "democracy-fascism" alternative, and having put their trust in the leaders of Social Democracy who broke ranks and denied any involvement in the heroic movements during October, means they are responsible for a 2nd assassination of the féros of Oviedo, Gijon, Mières and Langrèo, perpetrated with the elections of February 16, 1936.

The table isn't coming-out right. Anyone know what's wrong with it?

This is how it should look:

I changed the input mode to 'full html' so it can read the table formatting, should be working now

when the Spanish agricultural proletariat [...] launched a series of violent strikes and occupations of the land in 1931, it was the Left government which pursued a policy of bloody repression 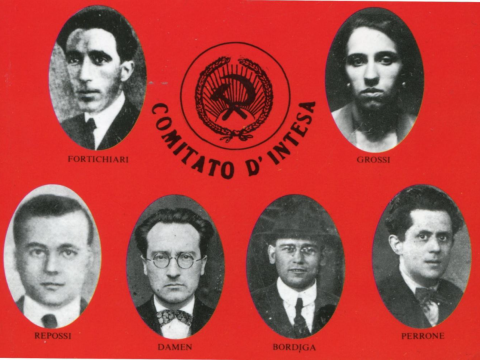 Updated, substantially-expanded, 2013 Philippe Bourrinet text on the history of the Italian…
Image 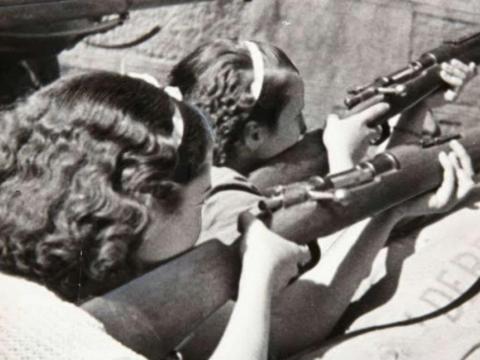 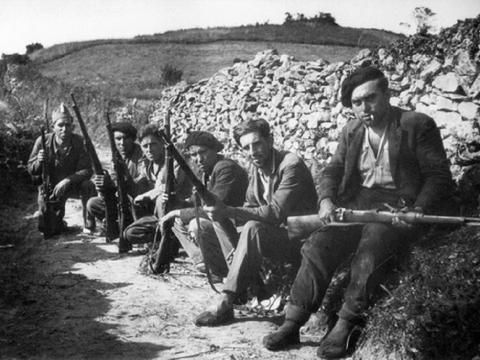 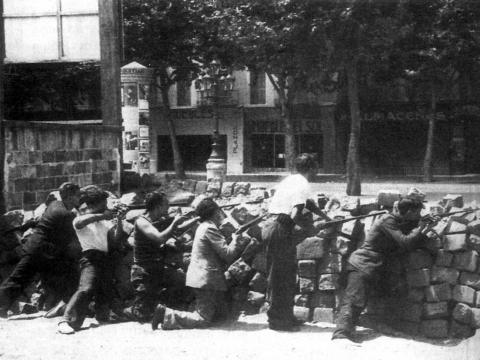