The following is a presentation by the CNT-Granada Education Union for a conference on 'Precarious work, self-management and co-operatives', held in La Vecilla near León, Spain in August 2010.

Introduction
We produced this paper during the closing ceremonies to celebrate the “efforts” of the G8 and G20, and this made us reflect on how the powerful eagerly continue with their strategy of demolition: while ratifying governmental measures to cut the salaries and services for the most vulnerable, they give unconditional support to the banks and employers who are to blame for the economic disaster that we are suffering. The states have started a preemptive repression against the direct struggles of the exploited.

Lately, we are witnessing the consolidation of a model of capitalist production based on the search for low wage areas, which allow the maintenance of a strong competitiveness and the accumulation of large profits for the investors. The gradual and accelerated move of fixed asset industries (to China, India and the countries of the former Soviet Bloc...) and the economic and social transformation of the countryside – that is, the end of the process of rural immigration to the cities - have brought Spain to a debt based economy which has favored consumption, real estate speculation, and corruption. Despite the official speeches about research and development, until the current “crisis” Spain continued to be a “champion” of tourism, residential construction, and services, all sectors that employ high numbers of casual and precarious workers.

The avalanche of cash from European and private funds (easy credit in recent years, with low interest rates due to the entrance of Spain into the Euro zone) has strengthened the purchasing power of many families, without substantially increasing wages. This scene has allowed the employers to reduce their labour costs. The financial disaster that was triggered in 2007 by the crsis of junk mortgages in the US caused the economy to slam on the brakes, suffocating as it was from the sudden halt in financing. The Current widespread unemployment (20% in the whole of the Spanish state and a 30% in Andalusia) brings indebted working-class families to confront increasingly unbearable situations. Governments of every stripe always choose to defend the employers and the financial interests. The austerity measures and the labour reform strengthen the power of the employers against the working class. They lead to massive sacking, -employment reduction acts at a lower cost. The result is that workers accept continually worse working conditions.

The last mobilisations carried out by the official unions display, for the moment, their inability to change the path of the austerity measures imposed by the Zapatero government. So far, the political-unionist mediation has proved its efficiency at deactivating working-class struggles that don’t enter the customary channels of compromise. Currently we are witnessing a rush against the clock, initiated by certain unions - nationalist or otherwise - whose aim is to anticipate or force a general strike before the one called by the “majority” unions for late September. In this context, it is important for the CNT-E to have enough visibility to be able to defend the common interests of all workers, steady or casual.

Casual Work
The EU policy of imposing the privatisation of public services in order to open them for competition, currently coincides with the Spanish budget cuts and the labour reform that is going to dismantle a large part of the protection that at least part of the working-class had managed to keep. The figure of casual work, unfortunately, will expand, in the private as well as the public sectors. Reformist unions claim that they organise and defend workers as a whole. But they just come with speeches in defence of the steady workers in the public administration or in big companies, basically striving – in exchange for reduced privileges – about guaranteeing social peace. In this context of cuts across the board, defending the rights of their members would require them to put up or shut up. But we do not believe that they have the will to change the path of History. In order for there to be strong and resounding mobilizations, it is necessary to overwhelm these unions.

Reformist unions are not interested in organising or defending causal workers. Moreover, their vertical and bureaucratic structure does not correspond to the situation of casual workers, which is characterized by dispersion and mobility. This leaves a huge opening with a bright future for anarcho-syndicalism. The generalization of casual work and social exclusion for wide sectors of the population raises a fundamental challenge for anarcho-syndicalism. Horizontal structures, direct action, and working-class solidarity are more efficient tools than verticalism and union elections. The official union apparati suffer from a chronic inability to adapt: they are rigid; their structure is heavy and devoid of militancy. Organised by corporation or industry, they are unable to respond to the problems of the majority of the exploited. In comparison, the widespread territorial presence of the CNT and its horizontal nature allow us to respond rapidly to any matters that arise in labour and social fields.

Cooperatives
Since the beginning of the labour movement, groups of workers have tried to escape from their condition as wage earners by setting up production or consumption cooperatives. If some of them viewed cooperatives as an aim in and of itself, others considered it a means of self-defence against management repression (black lists, dismissals...). Sometimes, cooperatives have been interesting places for social experimentation but, in most cases, their evolution has been negative.

In certain areas, as for example in Euskadi [Basque Country], paternalistic reformers compensated for the lacks of the economic system under the Franco dictatorship by setting up, amongst others, the famous Mondragon Cooperative, which today has become a large holding company. There are similar experiences of cooperatives all throughout Europe, where the exploitation of the workers does not differ from the exploitation in any other company. The fact that cooperatives are entering the “free” market implies that they accept the rules of competition (low prices...) set by the other companies in their sector of the globalised economy. This situation forces them to adopt capitalist forms of exploitation of the workforce and an iron leadership, in contradiction with the initial postulates of cooperation and workplace “democracy”. Even if we consider that the development of cooperatives can, at a given moment, be a method for self-defence or for short-term survival, at no point should we allow them to sidetrack us from our main activity, which is the anarchosyndicalist struggle in the workplace in order to transform society and the economy as a whole. Above all, we do not think that the capitalist system can be gradually changed by the multiplication of cooperatives.

Self-management
This concept, so widely used during the French revolt in May ‘68, inspired by the anarchist collectives in Spain (1936-39) - but also used in Tito’s Yugoslavia or in Algeria! - seems very ambiguous to us nowadays. It was always necessary to add adjectives, e.g. “generalised self-management”, in order to avoid confusion, since many reformists spoke about self-management as a synonym for workers co- management in capitalist companies - in short, the cooperation of the workers in their own exploitation.

The desertion of employers from companies, for example in Argentina, cedes space for workers to takeover and begin production. This seems to us more coherent with a form of direct management of the enterprise. Self-management is often the result of a confrontation between workers and employers who are unable to keep their business viable. The phenomenon of self-management must be generalised if we do not want it to perish. If they don’t take part in a wide dynamic of social struggles, experiences in self-management will be a minority and will be progressively reduced or recovered by the system. Our egalitarian ideal implies that we continue struggling until absolutely no one suffers from exploitation. The tools of self-management and of cooperatives can only be, in the best of cases, tools to struggle towards libertarian communism, which implies generalised socialisation of the means of production and distribution, in a federation of free municipalities.

GRANADA CNT/AIT EDUCATION UNION
Translation by the IWA and OliverTwister

The phenomenon of self-management must be generalised if we do not want it to perish. If they don’t take part in a wide dynamic of social struggles, experiences in self-management will be a minority and will be progressively reduced or recovered by the system. 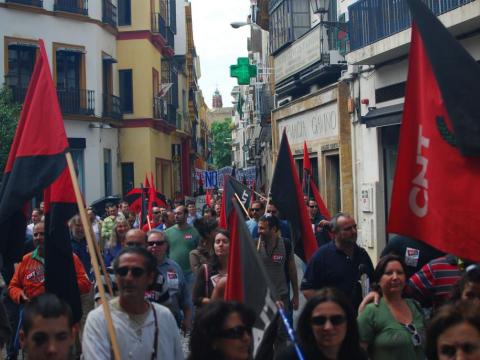 This is an excerpt from a pamphlet by CNT Seville called Anarcosindicalismo: Basico. The pamphlet is a training manual for new union members, to… 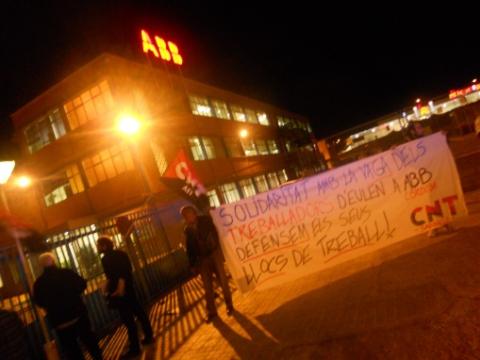 Outsourcing of workers at the ABB factory in Cordoba is currently being used as the pretext to get rid of militant workers, leading to 34 workers…