Biography of Pierre Joseph Proudhon and his actions during the 1848 Revolution in France and the June Days workers revolt in Paris.

Proudhon was from humble origins but had become a well-known French social theorist during the 1840s. A printer by trade, he was an exponent of mutualist socialism, a sociopolitical creed that may also be called anarchism. His most famous book was his second one, Qu'est-ce que la propriété? (1840) (he polemically responded that "it is theft"), but before 1848 he also had published De la célébration du Dimanche (1839), De la création de l'ordre dans l'humanité (1843) and Système des contradictions économiques, ou philosophie de la misère, (in 2 volumes, 1846). A persistent critic of the French July Monarchy, he was nonetheless surprised by the outbreak of hostilities in Paris in February 1848. In his correspondence, he recounted his participation in the February uprising and the composition of what he termed "the first republican proclamation" of the new republic. The same correspondence indicates, however, that Proudhon had misgivings about the new government because it was pursuing political reform at the expense of socioeconomic reform, which Proudhon considered basic.

Determined to set the new republic on the correct course, Proudhon published his own perspective for reform, Solution du problème social, in which he articulated a program of mutual financial cooperation among workers that he believed would transfer control of economic relations from capitalists and financiers to workers. Pivotal here was his pan to establish a bank which would provide credit at a very low rate of interest and issue "exchange notes" that would circulate in lieu of money based on gold.

Proudhon made his biggest impact on the public during the Second Republic through his journalism. He was connected with four different newspapers: La Représentant du Peuple (February 1848 - August 1848); Le Peuple (September 1848 - June 1849); La Voix du Peuple (September 1849 - May 1850); Le Peuple de 1850 (June 1850 - October 1850). His polemical writing style, combined with his perception of himself as a political outsider, produced a cynical, combative journalism which alienated some, but appealed to many French workers. In his numerous articles he criticized the policies of the government and continued to propose the reform of credit and exchange. To realize his plan, he attempted to establish a popular bank (Bank du Peuple) early in 1849, but despite numerous adherents (perhaps as many as 13,267--mostly workers), receipts were meager (about 17,993F) and the whole enterprise was essentially stillborn.

Proudhon failed to get elected to the constituent assembly in April 1848, though his name appeared on the ballots in Paris, Lyon, Besançon, and Lille. He was successful, however, in the complementary elections held on June 4, and was therefore a deputy during the debates over the National Workshops. Proudhon had never advocated such workshops, accurately perceiving them as essentially charity institutions which did not directly attack the problems of the economic system, but he opposed their elimination unless some economic assurances could be given to the workers who relied on them for subsistence.

Proudhon was shocked by the violence of the June Days. He visited the barricades personally to acquaint himself with the events that were unfolding and reflected in 1855 that his presence at the Bastille at this time was "one of the most honorable acts of my life." But in general during the tumultuous events of 1848, Proudhon opposed insurrection and preached peaceful conciliation, a stance that was in accord with his lifelong stance against violence. He never fully approved of the revolts and demonstrations of February, May, or June, 1848, though he sympathetically portrayed the social and psychological injustices that the insurrectionaries had been forced to endure, and argued that the forces of reaction were the responsible parties for the occurrence of these tragic events.

Following the June Days, Proudhon faced the criticism of conservatives within the national assembly, especially for the economic reforms that he continued to advance. Following a heated exchange within the committee of finance of the national assembly (of which Proudhon was a member), Proudhon's proposals were condemned on the floor of the assembly by Adophpe Thiers. Proudhon responded with a three-and-a-half-hour speech on July 31 in which he argued that the abrogation of property was the essential economic meaning of the 1848 revolution and insisted that the country should "proceed with the social liquidation." The speech was frequently interrupted by pointed rejoinders from the floor of the Assembly and was followed by a motion of censure that was supported even by Louis Blanc and Pierre Leroux.

As this vote indicated, Proudhon's relationship with the démoc-socs of the mountain was strained. Though there was a brief attempt to form a new left-wing coalition in the fall of 1848, this failed because, in Proudhon's opinion, the mountain remained attached to political revolution rather than social revolution. Proudhon and the mountain could put aside their differences long enough to vote together on November 4 against the new constitution (though for different reasons), but by the end of the month they were again at each others throats.

Proudhon also had a run-in with the new president of the republic, Louis-Napoleon Bonaparte, which led to his prosecution and imprisonment. Proudhon had opposed Bonaparte throughout 1848: he had criticized him in two articles in Le Représentant du Peuple in June 1848; he voted against allowing him to take a seat in the constituent assembly; he opposed the creation of a strong executive elected directly by the people; he opposed Napoleon in the presidential elections of December 1848. Proudhon's attacks became more aggressive in January 1849, and the government responded by getting the assembly to lift Proudhon's immunity from prosecution and, in March 1849, had Proudhon sentenced to three years in prison and fined 3000F. Proudhon went into hiding for two months, although he continued to write articles for Le Peuple, but on the night of June 5 he was arrested and transferred to Sainte-Pélagie.

During his three years in prison, Proudhon married and fathered a son (an indication of the leniency accorded political prisoners during this era), and he also wrote and published four books. The first, Confession d'un révolutionnaire (November 1849) was Proudhon's personal account of the 1848 revolutions. The second, Idée générale de la révolution au XIXe siècle (July 1851), discussed the specific the specific reform proposals that Proudhon had articulated in Solution du problème sociale, but placed them in the context of the inevitable historical progression toward greater liberty and equality that Proudhon termed "revolution." It has always been considered one of Proudhon's most important writings. The third book, La Révolution sociale demontrée par le coup d'état du 2 decembre 1851 (July 1852), was an appeal to Louis-Napoleon to work for the revolution by implementing social reforms. The fourth book, Philosophie du progrès (September 1853), was more philosophical in nature and had little to do with the Revolutions of 1848.

Proudhon's actions and writings during this period have always been controversial. Though clearly on the political left, his opposition to the provisional government and his public quarrels with prominent socialists like Louis Blanc made him unpopular with the mountain. His attacks of Bonaparte, followed by his book urging him to embrace a progressive and "revolutionary" program, have caused confusion and led to criticism. His stances concerning politics--opposition to universal suffrage followed by election to the constituent assembly and insistence that Bonaparte institute reforms "from above"--has made it easy to dismiss Proudhon as hopelessly inconsistent. However, Proudhon did pursue a consistent social program, one that he hoped to see implemented by different parties at different phases of the revolution. His general goal was to return the control of the productive process back over to workers, a transformation that he believed could be furthered by the implementation of his proposed reforms of credit and exchange. The masthead slogan of his paper in 1848, Le Représentant du Peuple, stated it clearly: "What is the producer in actual society?--Nothing. What should he be?-- Everything."

Thrust into the public sphere by tumultuous events of 1848, Proudhon desired to influence national socioeconomic policy, but he proved to be an ineffective political actor. As he himself perceptively noted in 1850, he was basically a "man of polemics, not of the barricades." 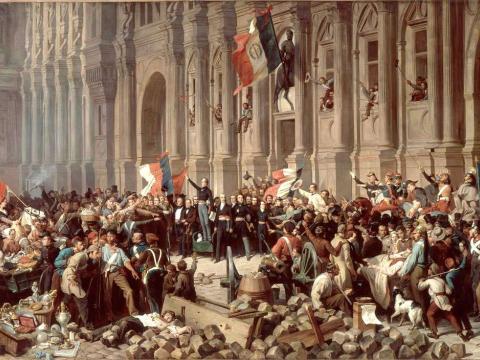 John Hewetson's analysis of the important lessons of the uprisings that threatened the rulers of Europe in 1848. From A Hundred Years of… 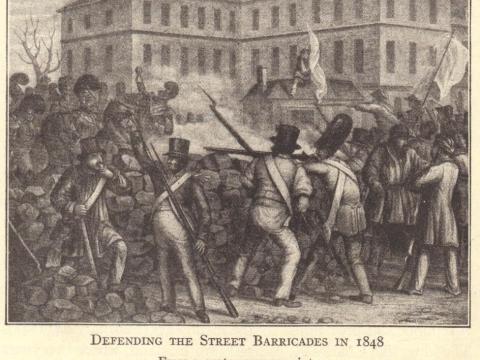 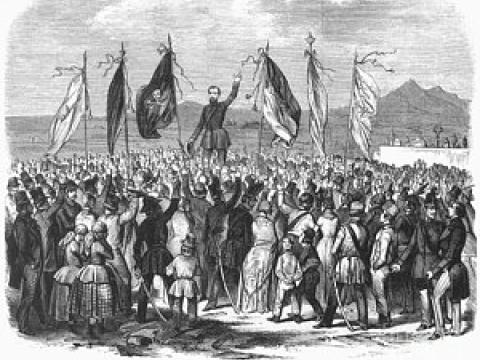 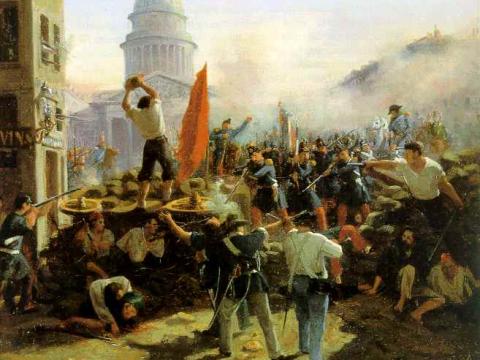