Issue 3 of Red and Black Revolution, first published in 1998.

Last year the domestic water charge was abolished. In 'Winning the Water War', Dermot Sreenan, an activist in the Federation of Dublin Anti-Water Charges Campaigns examines the campaign and the demonstration of people power that brought about the downfall of this charge.

Italian Anarchism...Get back to where you once belonged

Many revolutionaries in recent years have been engrossed in analysing the mistakes of the past and the changing nature of capitalism. Andrew N. Flood a participant in the "Intercontinental Gathering for Humanity and against neo-liberalism" argues it is time to start moving on to the constructive work of building a new movement.

The Emergence Of Modern Irish Socialism 1885-87

Fintan Lane is a historian and left-wing activist. He is the author of The Origins of Modern Irish Socialism, 1881-1896 which will be published by Cork University Press on 1 May.

Anarchists and the trade unions - Be active - be involved

Trade Unions are important organs of the working-class. Gregor Kerr - a member of the Irish National Teachers Organisation who has been involved in campaigns against "social partnership" and in many strike support groups - argues that trade union involvement should form a central part of the political activity of all anarchists.

Despite its relevance, The Organisation Platform of the Libertarian Communists is as controversial as ever. Kevin Doyle reviews Constructive Anarchism, a new pamphlet from Monty Miller Press in Australia that has collected The Platform and some of the early responses to its proposals into one useful edition.

Review: The Labour Movement and the Internet

The internet - viewed by some as the highway to the future, dismissed by others as an over - hyped toy with little practical value. Conor Mc Loughlin reviews a new book on the internet and its use by the labour movement.

After Apartheid: Anarchism and the 'new' South Africa

Just three years after the famous elections that ended apartheid in April 1994, South Africa's reforms are in crisis and dissatisfaction is rising. In a wide ranging interview we ask the Workers Solidarity Federation for their views on what has happened since the end of apartheid. Interview by Kevin Doyle.

Welcome to issue three of "Red and Black Revolution". Apologies for the fact that we are about six months behind schedule but we hope that you will forgive us for using the old cliche 'better late than never'. We hope to be back on schedule with Issue 4 which should be on the shelves in October '98.

We look also at what is happening in Anarchist circles and organisations in Italy - where Anarchism is enjoying something of a re-birth, and in South Africa - another country whose Anarchist history is little known but where great strides have been made by the movement in recent times.

The need for organisation, the idea that capitalism won't fall by itself, is a theme which is central to the politics of the WSM. We return to this theme in an article which challenges anarchists to face up to the necessity for organisation, and which sets out to discuss some of the challenges involved in such organisation.

Finally, on the good news front. It is rare in these times to be able to report on campaigns which successfully involve large numbers of people in challenging the state and which emerge victorious. However, just such a campaign has been run in Ireland, and especially in Dublin, over the past three years. The successful campaign against water charges was a tremendous victory for people power. It was a campaign with which the WSM was proud to be associated and our heartiest congratulations go to all involved. The significance of victories in single-issue campaigns such as this should never be under-estimated. All of those involved - whether centrally or peripherally - played an important role in forcing the government to back down. Solidarity did indeed prove to be strength, and this message must be carried forward to the next battle. 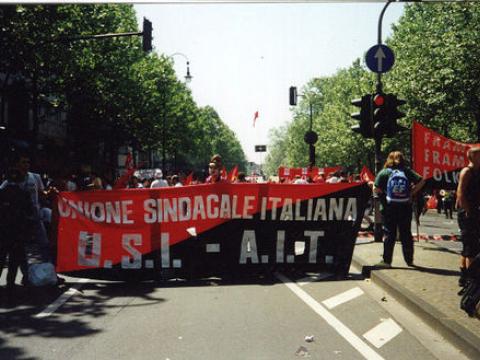 Italian Anarchism...get back to where you once belonged

Italy is one of the historical strongholds of the anarchist movement. In this article from 1998,…