Review: The anarchists of Casas Viejas

Aftermath of the Casas Viejas massacre

A review by "Anarcho" of the book The Anarchists of Casas Viejas, by Jerome R Mintz, the most detailed history of the unsuccessful anarchist uprising in 1933.

This is a wonderful book. For those who do not already know, Casas Viejas was an Andalusian village whose CNT branch rose in revolt in January 1933. Two civil guards were killed in the course of the uprising and, after a few hours, assault guards arrived to retake the village. Using torture, they discovered a family implicated in the uprising and a siege soon occurred at their house, in which one assault guard and eight villagers died (two of whom were gunned down trying to escape the house after the Assault Guards had set it on fire). Most of those involved in the uprising fled the village in the face of these superior forces -- including, eventually, those who were in the chumbas (cactus) firing on the troops conducting the siege. Once the siege was over the troops then rounded up 12 campesinos (rural workers and peasants) who had not taken part in the uprising (and so remained in the village) and murdered them to teach the rest "a lesson" (as the leader of the Assault Guards put it).

The actual events, and the murders by the Assault Guards, eventually became known and helped bring down the liberal-left government. It was also used as evidence for Liberal and Marxist interpretations of Spanish Anarchism (and Anarchism in general). Mintz's book demolishes these interpretations and exposes them as the myths they were.

Jerome Mintz is an American anthropologist who spent years with the campesinos of Casas Viejas, getting to know them and be known (and trusted) by them, gathering their testimony and experiences. His book is a masterpiece of oral history, allowing those involved in the uprising to express themselves in their own words -- and, by so doing, exposing the works of the "experts" -- historians, middle class academics, and so on -- as total nonsense. For example, the historians who maintained that there was a connection between anarchist strikes and sexual practices are quickly and effectively dismissed -- "the level-headed anarchists were astonished by such descriptions of supposed Spanish [anarchist] puritanism by overenthusiastic historians." Mintz traces the citations which allowed the historians to arrive at such ridiculous views to a French social historian, Angel Maraud, who observed that during the general strike of 1902 in Moron, marriages were postponed to after the promised division of the lands. As Mintz points out, "as a Frenchman, Maraud undoubtedly assumed that everyone knew a formal wedding ceremony did not necessarily govern the sexual relations of courting couples."

This example is but one of a tendency of historians (and reporters) to ignore the opinions and views of those actually taking part in social movements. Participants of demonstrations (particularly those that end in fights with the police) will not be surprised at the activities of the local press who arrived in Casas Viejas after the uprising was put down. After the news of the massacre become better known, one of the journalists who failed to discover the truth tried to explain how this had occurred. Arriving just after the massacre he had been determined to write the full story of the uprising and so sought out the deputy mayor, a civil guard, the priest, the mailman, and the telegraph and telephone personnel. In other words, everyone bar those involved and other campesinos. Like today's media, he ignored those involved and went for information to established authority figures -- "his attitude and moral posture made him inaccessible. . . He had made himself impervious to the truth." Anyone on the J18, N30 or M1 demos will find this familiar.

Mintz does not fall into this error. His book is a classic of oral history and the dignity, sensibility and humanity of the campesinos shines through. As does the practical nature of anarchism and how misleading (and distorting) is the standard historian image of anarchism as a form of religion. As Mintz points out, "at first glance the religious model seems to make anarchism easier to understand, particularly in the absence of detailed observation and intimate contact. The model was, however, also used to serve the political ends of anarchism's opponents. Here the use of the terms 'religious' and 'millenarian' stamp anarchist goals as unrealistic and unattainable. Anarchism is thus dismissed as a viable solution to social ills." In addition, the taint of religion is also the taint of irrationality. Mintz's book, by actually allowing CNT and FAI members to speak for themselves, shows how far this model is from reality. In fact, it is the historians who appear irrational and unrealistic -- imposing their wishes on the Spanish Anarchist movement rather than objectively reporting on it. Indeed, such an imposition which may be no accident -- "In his discussion of the distortions of anarchist activities by historians, Noam Chomsky [in Objectivity and Liberal Scholarship] warns that intellectuals may adopt the attitudes of their class in describing popular movements and the presumed need for elitist supervision."

One such historian whose writings Mintz totally destroys is the Marxist Eric Hobsbawm and his "primitive rebel" view of anarchism. As Mintz points out, "his account is based primarily on a preconceived evolutionary model of political development rather than on data gathered in field research . . . In short, he explains how anarchosyndicalists were presumed to act rather than what actually took place, and the uprising at Casas Viejas was used to prove an already established point of view. Unfortunately, his revolutionary model misled him on virtually every point." Rather than being a "utopian, millenarian, apocalyptic" uprising, Casas Viejas rose in response to a call for a nationwide revolutionary strike. The rural uprisings were seen as diversionary to the main struggle in urban centres and designed to keep the civil guard from shifting reinforcements. It was organised through the CNT defence committees and was determined by strategic rather than economic considerations (as Hobsbawm asserted). Yet again Marxist analysis of anarchism proves to be little more than assertions and wishful thinking.

Mintz's book is a classic and gives a wonderful insight into the lives and experiences of CNT and FAI members in rural Andalusia. It is clear from his book that the success of the CNT and anarchism in general was that it met the needs of those who joined it. He paints a vivid picture of campesino life, indicating that even the act of not marrying your partner was an extremely political act (the anarchist press reported when comrades formed "free unions" to show their solidarity with them and to encourage others). Rather than being "primitive rebels" or irrational extremists, the anarchists Mintz presents come across as sensible, intelligent human beings who believe in a better life and were willing to apply their ideas in their everyday life.

A good review of the book on the Spanish Civil War by renowned military historian Anthony Beevor, which was later republished as The battle for Spain.

We the Anarchists! (Review) 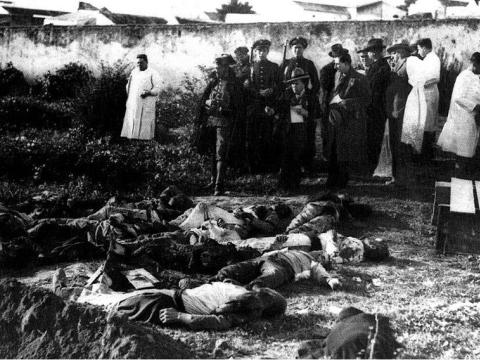