The revolution is not a party affair - Otto Rühle

This article was written in May 1920 and was first published in the German paper Die Aktion. This translation first appeared in the London Workers' Group bulletin (no. 14, October 1983). A different english translation was published in the American journal Revolutionary Struggle, No. 2, Spring 1979.

In parliaments the bourgeois epoch found the historical arena of its first contentions with the crown and nobility. It organised itself politically and gave legislation a form corresponding to the needs of capitalism. But capitalism is not something homogeneous. The various strata and interest groups within the bourgeoisie each developed demands with differing natures. In order to bring these demands to a successful conclusion, the parties were created which sent their representatives and activists to the parliaments. Parliament became a forum, a place for all the struggles for economic and political power, at first for legislative power but then, within the framework of the parliamentary system, for governmental power. But the parliamentary struggles as struggles between parties, are only battles of words. Programmes, journalistic polemics, tracts, meeting reports, resolutions, parliamentary debates, decisions – nothing but words. Parliament degenerated into a talking shop (increasingly as time passed). But from the start parties were only mere machines for preparing for elections. It was no chance that they originally were called "electoral associations".

The revolution of 1848 was stillborn. But the democratic state, the ideal of the bourgeois era was erected. The bourgeoisie, impotent and faint-hearted by nature provided no force and displayed no will to realise this ideal in the struggle. It knuckled under to the crown and the nobility, contenting itself with the right to exploit the masses economically and so reducing parliamentarism to a parody.

So resulted the need for the working class to send representatives to parliament. These then took the democratic demands out of the perfidious hands of the bourgeoisie. They carried out energetic propaganda for them. They tried to inscribe them in legislation. Social-Democracy adopted a minimum democratic programme to this end: a programme of immediate and practical demands adapted to the bourgeois period. Its parliamentary activity was dominated by this programme. It was also dominated by a concern to gain the advantages of a legalised field of manoeuvre both for the working class and its own political activity, through the construction and perfection of a liberal-bourgeois formal democracy.

When Wilhelm Liebknecht proposed a refusal to take up parliamentary seats, it was a matter of failing to recognise the historical situation. If Social-Democracy wanted to be effective as a political party, it would have to enter parliament. There was no other way to act and to develop politically.

When the syndicalists turned away from parliamentarism and preached anti-parliamentarism, this did honour to their appreciation of the growing emptiness and corruption of parliamentary practice. But in practice, they demanded something impossible of Social-Democracy: that it take a position contrary to the historical situation and renounce itself. It could not take up this view. As a political party it had to enter parliament.

The KPD has also become a political party, a party in the historical sense, like the German Social Democratic Party (SPD) and the Independent Social-Democrats (USPD).

The leaders have the first say. They speak, they promise, they seduce, they command. The masses, when they are there, find themselves faced with a fait accompli. They have to form up in ranks and march in step. They have to believe, to be silent, and pay up. They have to receive their orders and carry them out. And they have to vote.

Their leaders want to enter parliament. They have to elect them. Then while the masses abide by silent obedience and devoted passivity, the leaders decide the policy in parliament.

The KPD has become a parliamentary party like any other; a party of compromise, opportunism, criticism and verbal jousting – a party that has ceased to be revolutionary.

Consider this:
It entered parliament. It recognised the trade unions. It bowed before the democratic constitution. It makes peace with the ruling powers. It places itself on the terrain of real force relations. It takes part in the work of national and capitalist reconstruction.

How is it different from the USPD? It criticises instead of repudiating. It acts as the opposition instead of making the revolution. It bargains instead of acting. It chatters away instead of struggling. That is why it had ceased to be a revolutionary organisation.

It has become a Social Democratic party. Only a few nuances distinguish it from the Scheidemanns (SPD) and the Daumigs (USPD). This is how it has finished up.

The masses have one consolation – there is an opposition. But this opposition has not broken away from the counter-revolution. What could it do? What has it done? It has assembled and united a political organisation. Was this necessary?

From a revolutionary point of view the most decisive and active elements, the most mature elements have to form themselves into a phalanx of the revolution. They can only do this through a firm and solid foundation. They are the elite of the new revolutionary proletariat. By the firm character of their organisation they gain in strength and their judgment develops a greater profundity. They demonstrate themselves as the vanguard of the proletariat, as an active will in relation to hesitant and confused individuals. At decisive moments they form a magnetic centre of all activity. They are a political organisation but not a political party, not a party in the traditional sense.

The title of the Communist Workers' Party (KAPD) is the last external vestige – soon superfluous of a tradition that can't be simply wiped away when the living mass ideology of yesterday no longer has any relevance. But this last vestige will also be removed.

The organisation of communists in the front line of the revolution must not be the usual sort of party, on pain of death, on pain of following the course of the KPD.

The epoch of the foundation of parties is over, because the epoch of political parties in general is over. The KPD is the last party. Its bankruptcy is the most shameful; its end is without dignity or glory... But what comes of the opposition? ...of the revolution?

This is why all proletarians ready for revolutionary combat must be got together at the workplace in revolutionary factory organisations, regardless of their political origins or the basis by which they are recruited. Such groups should be united in the framework of the General Workers' Union (AAU).

This General Workers' Union is taking root in the factories, building itself up in branches of industry from the base up – federally at the base, and through revolutionary shop stewards at the top. It exerts pressure from the base up, from the working masses. It is built according to their needs; it is the flesh and blood of the proletariat; the force that motivates it is the action of the masses; its soul is the burning breath of the revolution. It is not the creation of some leaders; it is not a subtly altered construction. It is neither a political party with parliamentary chatter and paid hacks, nor a trade union. It is the revolutionary proletariat.

So what will the KAPD do?

It will create revolutionary factory organisations. It will propagate the General Workers' Union. Factory by factory, industry by industry it will organise the revolutionary masses. They will be prepared for the onslaught, given the power for decisive combat, until the last resistance offered by capitalism as it collapses is overcome.

It will inspire the fighting masses with confidence in their own strength, the guarantee for victory in that confidence will free them ambitious and traitorous leaders.

From this General Workers' Union the communist movement will emerge, starting in the factories, then spreading itself over economic regions and finally over the entire country, i.e. a new communist "party" which is no longer a party, but which is, for the time communist! The heart and head of the revolution!

We shall show this process in a concrete way:

There are 200 men in a factory. Some of them belong to the AAU and agitate for it, at first without success. But during the first struggle the trade unions naturally give in and the old bonds are broken. Some 100 men have gone over to the AAU. Amongst them there are 20 communists, the others being from the USPD, syndicalists and unorganised. At the beginning the USPD inspires most confidence. Its politics dominate the tactics of the struggles carried out in the factory. However slowly but surely, the politics of the USPD are proved false, non-revolutionary. The confidence that the workers have in the USPD decreases. The politics of the communists are confirmed. The 20 communists become 50 then 100 and more. Soon the communist group politically dominates the whole of the factory, determining the tactics of the AAU, at the front of the revolutionary struggle. This is so both at the small scale and large scale. Communist politics take root from factory to factory, from economic region to economic region. They are realised, gaining command, becoming both body and head, the guiding principle.

It is from such communist groups in the factories, from mass sections of communists in the economic regions that the new communist movement – through the council system will come into being. As for "revolutionising" the trade unions or "restructuring" them. How long will that take? A few years? A few dozen years? Until 1926 perhaps. Anyway, the aim could not be to wipe out the clay giant of the trade unions with their 7 million members in order to reconstruct them in another form.

The aim is to seize hold of the commanding levers of industry for the process of social production and so to decisively carry the day in revolutionary combat, to seize hold of the lever that will let the air out of the capitalist system in entire industrial regions and branches.

It is here, in a mature situation, that the resolute action of a single organisation can completely surpass a general strike in effectiveness. It is here that the David of the factory can defeat the Goliath of the union bureaucracy.

The KPD has ceased to be the incarnation of the communist movement in Germany. Despite its noisy claims about Marx, Lenin and Radek it only forms the latest member of the counter-revolutionary united front. Soon it will present itself as the amiable companion of the SPD and USPD in the framework of a purely "socialist" workers' government. Its assurance of being a "loyal" opposition to the murderous parties who have betrayed the workers is the first step. To renounce the revolutionary extermination of the Eberts and the Kautskys is already to tacitly ally oneself with them.

Ebert–Kautsky–Levi. The final stage of capitalism reaches its end, the last political relief of the German bourgeoisie the end. 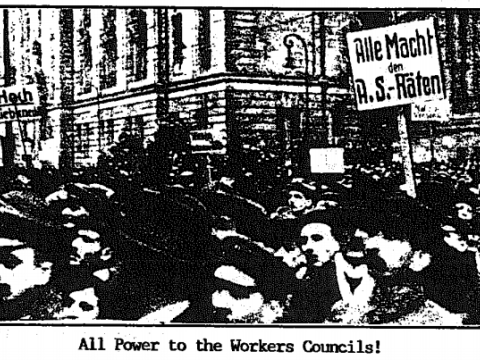 A history of the German Communist Workers Party (KAPD), a council communist… 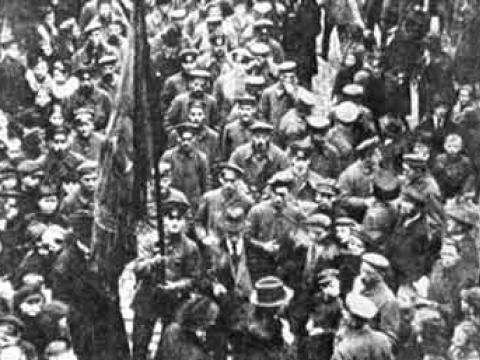