Seeing the problem, being the solution, making the sacrifice

Bennu Hannibal Ra-Sun discusses the way forward for the prison movement in 2018. This article originally appeared in the San Francisco Bay View.

Last month, on Monday, Jan. 8, 2018, millions of people diverted their collective attention to the College Football Playoff National Championship Game in Atlanta, Ga. At the same time, on the other side of the country in Las Vegas, Nevada, almost 250,000 people congregated for the start of the week long CES presentation (formerly Consumer Electronics Show), the world’s largest tech trade show. On display will be the latest technological innovations that will influence and dictate the future of the world that we live in.

Unfortunately, most of us will be more in tune with the sporting spectacle – which will afford us an emotional discharge and escape from the reality of our problems – than those of us who will be focused on learning what technologies will be available for us to continue to advance our struggle towards a solution in our digital world.

The theme of the CES platform is directed towards consumers. Ultimately, though, these technologies will be refined for policing purposes and will be used to control our lives behind these walls. And just like the consumer show, corrections agencies have their own “tech” convention every year, hosted by the American Correctional Association, where they exchange ideas and shop for products.

Notoriously missing from this equation is us, the very people who are being controlled by these technologies. To a degree, we have been able to make effective use of social media to wage our fight to end mass incarceration and prison slavery.

In several of my articles throughout this series promoting our Campaign to Redistribute the Pain 2018 boycott, I proposed that we utilize this year-long bi-monthly February-April-June-Black August-October-December boycott to develop a national organization and put forth a national agenda and plan of action; create a digital storefront so that we can generate revenue from our talents, skill and abilities (think eBay, Amazon-type store); and most importantly, we need to get us an app created so that we can collect, organize and disseminate all of the information that is critical to us building awareness to our struggle and what people can do to join, support and share information about our movement.

Right now, all of this data is scattered out all across the internet, in various books and in reports that people have no idea where to start looking for. According to a research study by the Institute for Advancing Justice Research and Innovation at Washington University in St. Louis, in 2016, the true cost of incarceration is estimated to be $1 trillion per year, and the researchers also found that more than half of those costs are being shouldered “directly by prisoners, their families, and their communities.” That’s a lot of information scattered around.

If we, indeed, are shouldering the burden for over half of these costs, which amounts to $500 billion, then isn’t it reasonable to expect that we should do a better job of collecting this information and tracking this money so that we can better organize our movement towards bankrupting prison slavery?

I would surmise that if we contribute over $500 billion in direct financial contributions, then the other half is probably coming directly from our labor. In Nas’ song, “N—–”, he said that in relationship to our problems, we are both the question and the answer. Well, if we are the financial pillars of this system, we are both the problem and the solution. In prison slavery, we are the slave and the master.

In the December 2017 issue of Bay View, our Brother Terrance Amen stated the following: “We all know what the problems are, but very little energy and effort are focused on the solutions. We are not the ones who put ourselves in this situation, but we are the ones who continue to stay in this situation because of the way we spend our money.”

Our Campaign to Redistribute the Pain 2018 focuses all of our energy and effort on the solution to the problems that we perpetuate from the way that we are spending our money while in prison. Invariably, solutions create issues because solutions call for sacrifice.

Talking about a problem is easy. In these prisons, even in the Bay View, we see much talk devoted to the problem. The solutions that are offered – if one can waddle through all of the talk and find one – usually deviate far and wide from any sacrifices being made. The norm usually reveals signs of the “savior complex,” where we are calling for the politicians to fix it.

But Brother Amen also said: “Politics will not solve our problems. Black economics will.” That’s why the most important aspect or feature of the Campaign 2RTP is the incorporation of our family members and others who make financial contributions to us in prison.

A lot of people in prison simply don’t want to make any sacrifices whatsoever, and have no problem exploiting the people who love them for funds. They don’t dare educate their people about this movement, our boycotts or otherwise. This Campaign 2RTP is designed for us to be able to bypass those negative elements and engage these family members directly. Getting our app created will only make this process that much easier.

Those of us on the inside know that prisons have an economy too, as well as a culture set up to exploit those just entering the system. With prisons across the country being so overcrowded and understaffed, administrators have resorted to alternative methods to control such large populations.

One of the things that wardens and officers do is select collaborators from the population to help them control the masses in much the same way that slave owners used to do. These collaborators are allowed to control the drug, liquor, cigarette, gambling and other markets.

When the youth enter the prison, they are immediately preyed upon. Those youth who have money or financial support are steered towards drugs and other vices. Those who have nothing are recruited to gangs, the “armies” that the dealers use or, lacking these, they are turned out and forced into quasi-prostitution or they become labor slaves.

Those of us who recruit them for education and self-development are targeted by the system. When we try to build our movement and open the eyes of the youth and the people to what is really going on with mass incarceration and prison slavery, we become subject to “hits” like our ancestor Hugo Pinell and so many other warriors.

The collaborators work with the police to stop the movement but they never work with the movement to stop slavery. These are dynamics that people in society don’t know about, but the Campaign 2 RTP 2018 will serve many purposes before it is done.

Once again, I strongly recommend that as many of you as possible reach out to Queen Tahiyrah of Sign o’ the Times blogtalk radio and connect your/our families to her. Queen T hosts shows where incarcerated brothers and sisters call in from prison along with family.

Family support in prison requires devotion of a tremendous amount of time, money, sacrifice and other resources. Those of us on the inside have a duty and obligation to make sure that their sacrifices are worth it and appreciated.

If an incarcerated person does not have a GED, then there is no legitimate reason why they should not be in GED school after six to nine months in prison. Once they complete GED, if they don’t have an employable skill or trade, they should enroll in trade school.

These accomplishments will only help with parole eligibility and other release programs. And more importantly, they will help with self-development and with returning an asset to the community instead of a liability.

Families should encourage, support and ultimately demand as much in return for their sacrifices and support. We need to make sure that these important messages are reaching everyone, because we can’t continue to fund the institution of slavery.

Family support should also set a hard budget on how much money they can afford to send into a prison and stick to it. Too many people in prison are young when they enter and, thus, have no real concept of paying bills, child care, emergencies, elderly care, unexpected repairs etc. All they know is their needs. And, the vices in prison are strong, too, and expensive.

If an incarcerated loved one can’t stick to their budget and is constantly calling home for money, pay pals and green dots, then this is a red flag and warning sign that something is wrong. Gambling, drug abuse and wasting money in prison trying to portray an image are real problems, and the opioid crisis that is claiming so many lives in America is alive and well in the prison, too.

All of this is being financed by someone or being facilitated by someone. If this someone is you, please stop it now and help us bring everyone home from prison as soon as possible, starting with the defunding effort being spearheaded by our Campaign to Redistribute the Pain 2018.

We have talked about the problem ad nauseum. We have cried enough tears to fill up many rivers. Our complaints have been noted and ruled on, and we have held on and endured for many seasons. As my Aunt Mary in Mississippi DOC would say, “Enough is enough.” Now is the time to Redistribute the Pain in 2018.

Our Campaign 2 RTP 2018 kicks off on Feb. 1, 2018, to begin Black History Month. It is time to not only celebrate Black history but to also show that we have learned from the lessons of history that is part of our heritage by using those lessons to help solve our problems.

Dare to struggle! Dare to win!

Book of the month: “We Will Shoot Back: Armed Resistance in the Mississippi Freedom Movement” by Akinyele Omowale Umoja

Literature of the month: “Liberation or Gangsterism” by Russell “Maroon” Shoatz/s

Newspaper of the month: Bay View

Word of the month: Sacrifice

We have talked about the problem ad nauseum. We have cried enough tears to fill up many rivers. Our complaints have been noted and ruled on, and we have held on and endured for many seasons. As my Aunt Mary in Mississippi DOC would say, “Enough is enough.” 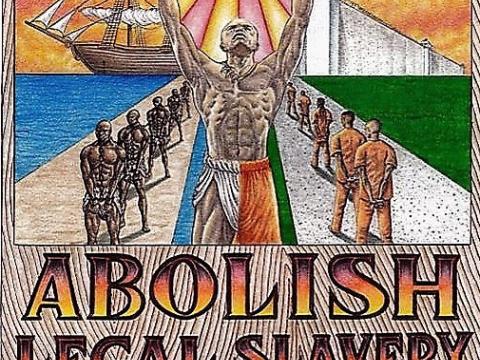 On Dec. 6, 1865, Black bodies were nationalized – and our prison movement was born 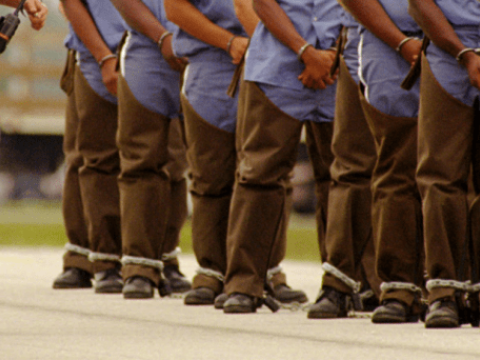 We are all bound by the same chain

Bennu Hannibal Ra-Sun discusses the Free Alabama Movement's strategy for 2018, and mentions some of the repression that has been employed against…
Image 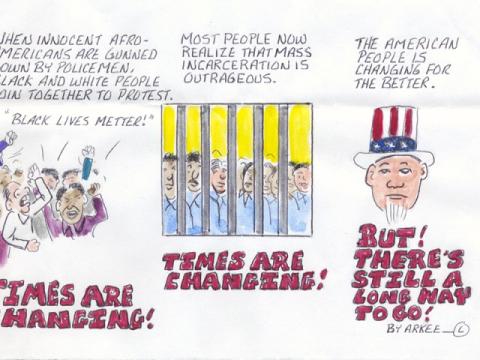 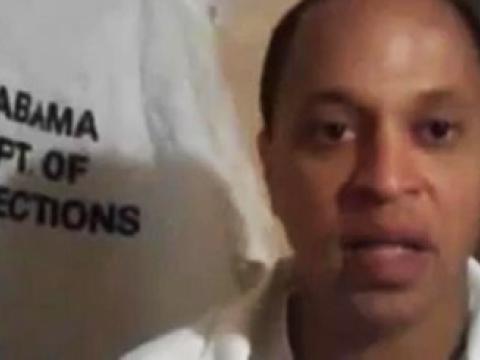 In an article originally released at the very start of 2018, Bennu Hannibal Ra-Sun…