An article examining the practice of sortition today and its role as organic and necessary, but highly neglected, part of the direct democracy as anti-authoritarian form of self-management.

Aristotle
In response to the deepening crisis of representation, direct democracy today comes up as an alternative proposal, put forward by the social movements arising worldwide. On the one hand, populists and party functionaries, in an attempt to attract the votes of the vast majority of people who are dissatisfied with the current state of affairs, have declared the semi-direct democracy approach of the referendum as their solution to the current crisis [1]. The social movements themselves, on the other, through their own practices, have highlighted the direct democracy approach of networks of ‘’face-to-face’’ assemblies. Discussions in political debates about reforming representative democracy in order to allow for broader citizen participation are becoming more frequent [2], while activists on the streets discuss and attempt to create autonomous structures beyond the state and Capital, which can potentially serve as groundwork for a fairer and more direct-democratic society.

Unfortunately, activists from different movements and the supporters of the aforementioned ideas often miss or even consciously neglect one practice in particular – choosing by lot (or Sortition), originating in the Athenian politia, where the very concept of democracy is rooted. According to Aristotle choosing by lot is a sign of democracy while elections are a sign of oligarchy. In the Athenian Democracy, sortition, together with the institution of the general assembly, allowed the citizens “to rule and to be ruled”. The logic behind the sortition process originates from the idea, also arrived at by Lord Acton many centuries later, that simply “Power corrupts”. Most empirical evidence from their time to ours, points to this conclusion [3]. For that reason, when the time came to choose individuals to be assigned to empowering positions, the ancient Athenians often resorted to choosing by lot.

The supporters of direct democracy often have a complete and detailed vision of what a society managed by local assemblies and coordinated by federative councils on a regional level would look like. But when it comes to the question of how the members of these federative structures should be elected, often no satisfactory answer is presented. No matter how decentralized the structure of a society becomes, the danger of emergence of formal and informal hierarchies, undermining the democratic processes, is always present and the search for mechanisms for their prevention should be a concern of everyone, as long as people want to keep direct democracy functioning. According to Michel Foucault “power is everywhere and comes from everywhere”[4]. In this line of thought, power is not limited only to one central structure (the state for example) or to the concentration of material goods in the hands of an elite. It is everywhere, reproducing itself in our relationships, language, culture, etc.

If we view this logic from an antiauthoritarian perspective we can conclude that the danger in a society based on direct citizen participation, for example, elected delegates to become “professional politicians” (In the bad sense of the word) is very real. In many groups today, even in ones that are part of the anti-authoritarian specter, unofficial hierarchies keep emerging and participants often do not have the means to confront these problems, which slowly corrodes the relationships between the activists or even leads to the group’s breakup. Choosing by lot is a mechanism precisely suited for dealing with that problem, preventing the establishment of strict “political” roles.

Another key aspect of sortition is that it promotes an active citizenry. In order to function properly, a direct democracy needs autonomous individuals, capable of critical thinking and interested in public affairs, or in other words: active citizens. Institutions, utilizing the mechanism of sortition, serve as universities on citizenship, where people immerse themselves deeply in the political life of the society for a certain period of time and acquire a sense of responsibility, and depending on the size of the community, all of them, or a large percentage of the population, passes through that process. Also, by knowing that they can be chosen at any moment, the people are thus stimulated to act responsibly and to care about the common affairs of the society on daily basis.

Sortition can also potentially help with the emancipation of women. While in a representative democracy (with elections as its main mechanism) governments are dominated primarily by men, in an institution where members are chosen by lot, a society may decide for the configuration between men and women to be equal [5]. This also applies for marginalized communities. In general, during the electoral processes they almost always remain unrepresented, while in the case of sortition this can be regulated by the society itself.
Of course, thinking that sortition alone can prevent the emergence of demagogues and “professional politicians” is naïve. But if it's implemented together with short periods for holding the position, revocability and rotation, similar to the model that emerged in Ancient Athens, we get a comprehensive package of mechanisms that serves to prevent the occurrence of oligarchy.

It is important to note that while sortition can be a principal method for appointing most administrative roles in a direct-democratic society, some of them will still have to keep the electoral element. Some tasks demand expertise that most people lack, and because of that it is necessary that the citizens be able to choose between the experts they have. For example in Ancient Athens, naval admirals, architects, etc. were chosen through elections, while sortition was the dominant way of choosing members of the Boule [6], magistrates etc.

Today the process of sortition is not a widespread practice in governance. The most famous example is the Citizens' Assembly in British Columbia [7]. Itoffers empirical evidence on what the choosing by lot can look like in practice, though in a non-direct democracy.

In 2003 the Local Government of British Columbia, Canada created a Civil Assembly chosen by lot and aimed at formulating a referendum proposal for a new electoral system for the local parliament. Until then the electoral system in British Columbia was standard, based on elections, whereby the winner formed the local government. Many residents, however, were unhappy with this model, feeling that their voice was not being heard. This led to the creation of the Citizens' Assembly for Electoral Reform, comprised of 160 delegates chosen by lot among all the inhabitants of the province – one man and one woman from each of the 79 electoral districts of British Colombia, plus two delegates from the indigenous communities.

The work of the Citizens' Assembly passed through three stages. From January to March 2004 delegates gathered every weekend in Vancouver to explore alternative electoral systems through an intensive series of lectures, seminars and discussions. Each delegate received a fee of $ 150 for each weekend of work. In the second stage, the summer of 2004, delegates took part in a series of public hearings across the province to discuss alternative electoral models and to hear reactions and feedback. In the third stage, the autumn of 2004, the Civil Assembly met again every weekend for intensive discussions at the end of which delegates prepared a referendum proposal for a new electoral law. To the surprise of many they did not choose a straightforward system of proportional representation, but rather what is known as the Single Transferable Vote system [8].

In May 2005, the Assembly’s proposal was submitted for voting. However, the referendum did not pass, because electoral activity was 57.3%, slightly below the required 60%. One reason is that this referendum was confined to the framework of representation, which in the past decade has been in a serious crisis that deepens with time. But this experiment gives us valuable empirical evidence that we can use in the construction of other types of systems beyond representative democracy

From all we have said until now it becomes clear that sortition is an organic part of direct democracy. It plays a dual role – it helps facilitate the daily administration of larger areas, while preventing the emergence of hierarchies. In itself, sortition is not enough, as demonstrated by the experience gained from the experiment in British Columbia. But in combination with the institution of the general assembly, like the politia of Ancient Athens, it helps build sustainable, democratic processes and active citizenship.

Sortition can be used in different contexts, as was shown in the aforementioned examples. Neglecting it at the expense of other institutions is a mistake, as it is a mistake to restrict direct democracy only to the so-called ''political'' area, as populists with pro-capitalist views are trying to convince us today. It is difficult to imagine how a group, a society or movement will operate in a truly democratic way if it does not use all the mechanisms of direct democracy, and instead chooses only some of them, replacing the rest with undemocratic ones. The fact that some direct-democratic institutions and mechanisms may produce negative side effects, which is a principal concern, does not mean that we should abandon them. Precisely through the implementation and experimentation with these types of institutions, structures and mechanisms, we will be able to find their weaknesses and correct them.

[1] http://en.wikipedia.org/wiki/List_of_direct_democracy_parties
[2] http://globaldirect.today/press/DOCS/Global_Democracy/Transnational_Direct_Democracy_Kauffmann.pdf
[3] http://greatergood.berkeley.edu/article/item/power_paradox
[4] http://www.powercube.net/other-forms-of-power/foucault-power-is-everywhere/
[5] www.ssc.wisc.edu/~wright/ERU.htm , Chapter 6, page 171
[6] Boule (Greek: βουλή, „council, assembly“) — council of citizens appointed to run the daily affairs of the city. After the reforms made by Cleisthenes the size of the boule was expanded to 500 men chosen by lot from all citizens. (http://en.m.wikipedia.org/wiki/Boule_(ancient_Greece))
[7] http://www.ssc.wisc.edu/~wright/Published%20writing/Amy-Lang%20P&S.pdf
[8] Single Transferable Vote (STV) is organized around multimember districts, which increases the proportional distribution of seats, if the districts have enough members. STV also uses a preferential ballot to rank other candidates in each district. In practice, candidates from the same party compete against one another for vote's preferences, as in a primary system, giving voters more choice about who will be their representative, and undermining a party's ability to control the candidate from that district. (http://en.m.wikipedia.org/wiki/BC-STV)

'Sortition' is not a word commonly associated on this site with discussions about forms of democratic organisation, so perhaps the title could be better replaced with the reference in the introduction to 'choosing by lot' which process has some benefits referred to in this text, but unfortunately the content of this text, taken together with two others recently added to the library by this author, falls into a repeated error of viewing the crisis of modern global capitalism and the material problems of the exploited and oppressed classes of society and their resolution in terms of the evolution and perfection of democratic forms rather than that of class society and class struggle. The posters profile references give some clues to their political influences which have been criticised elsewhere on this site.

It is difficult to imagine how a group, a society or movement will operate in a truly democratic way if it does not use all the mechanisms of direct democracy, and instead chooses only some of them, replacing the rest with undemocratic ones. 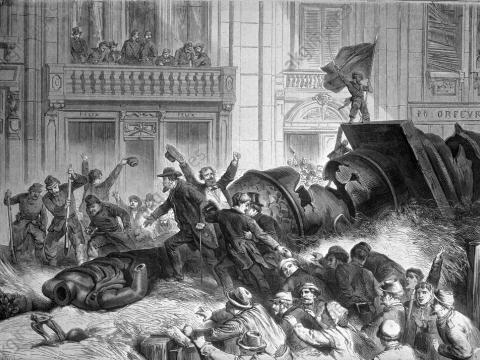 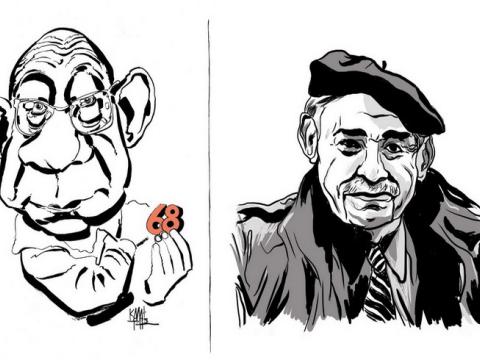 Reflections on Castoriadis and Bookchin

A brief examination of certain political aspects of the works of Cornelius Castoriadis and Murray Bookchin and their similarities. 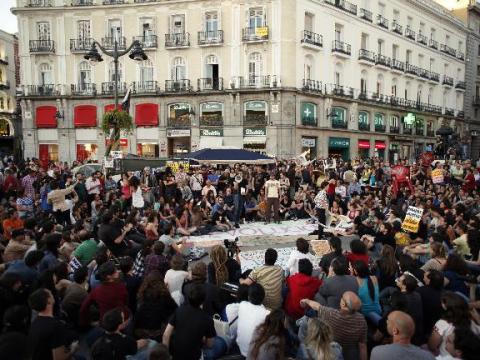 One of the most common arguments against direct democracy is that it sounds as a very good idea, but it is impossible to implement. 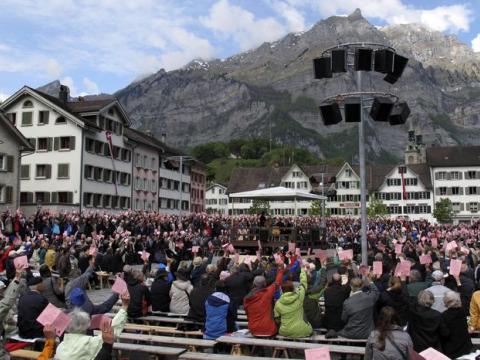 We live in dynamic times where a global crisis is slowly penetrating every sphere of our lives. In response to the contemporary state of…