Strike in the port of Koper

Report on strike in the port of Koper, Slovenia in summer 2016, which affected the supply chain in central Europe - published originally in German in issue no.100 of Wildcat.

The Slovenian government is trying to contain increasing state debt – from 22 percent of the GDP in 2008 to 83 percent in 2015 – with privatisations. On the European level the rulers want to deregulate the ports with new law packages (Port Package). This means that the government and the EU attack the relative protected workers in the semi state-owned enterprises – one of these is the port of Koper, which is 67 percent state-owned. Container handling and profit have continuously increased in the last years, new piers were constructed, new cranes were bought, the basin was dredged; new railways and hinterland terminals are being planned. Since 2011 the port is the most important one for Austrian industry, its volume almost doubling from 2006 to 2014. Koper is the biggest port in the North Adriatic Ports Association (NAPA: Koper, Ravenna, Venetia, Triest, Rijeka). Already in 2011 the workers organized a wildcat strike and were able to win improvements (see Wildcat 94). In July 2016 they struck again to prevent the sellout of the port – and they won. There wasn't a single word about it in the German-language media.

One peculiarity at the port is that the workers – at the head of which are the crane operators, organized into an »anarchist rank-and-file union« 1 – have achieved representation on the supervisory board (three out of nine heads) and on the management board (one out of four) of the operating company Luka Koper Inc. They have, de facto, a say about who will be CEO and what decisions can be made. There have been three CEOs in the past three years – the current one is a thorn in the government's side, because he rejects privatisation.

Since the summer of 2013 the government has tried every trick in the book to privatize the port and to wrest from the workers their control over cash flows and investments. In the past three years there have been substantial wage increases because the workers know the finances. Today, crane operators working without nightshifts and weekends earn as much money in one month as they did in 2013 with those shifts – about 1,500 Euros net – this is almost twice as much as a Slovenian worker's average wage.

Additionally, privatization would mean that a Port Authority would be installed, which has the total control over managing the concessions of the piers/terminals. The concessions would be sold to different enterprises which then operate the terminal, so that the workers in the same port would be employed by different enterprises, introducing separations and setting up in-house competition. Today that's common practice in every »modern« port.

At the end of June 2016 the Slovenian infrastructure minister sent an e-mail to the national holding, in which he explained that he wants to »improve« the supervisory board and install a new port administration. The contract with Luka Koper Inc. should be »revised« and a second operational company should be established. In our language: »If the current management structure is disempowered, we can finally privatize the port.«

This writing was leaked, and the workers got their hands on it. Though it only contained what the workers had suspected for a year and a half. The e-mail was not decisive for the strike, the crane operator assured us. What was crucial was the annual general assembly of the Luka Koper Inc. shareholders on July 1.

Just before, workers and solidarity groups had organized a demonstration in Koper on June 28, in which minority shareholders participated – citizens, workers, etc. – who own 33 percent of the shares and are affiliated in an association (Vseslovensko Združenje Malih Delničarjev, VZMD, Panslovenian Investors and Shareholders Association; one can find nationalists in it, too!). Port workers, minority shareholders and women from different organisations and from other enterprises spoke. Four thousand people marched through the city (Koper has 25,000 inhabitants). Speeches at the demonstration had to do with the catastrophic effects of privatisation and about the corruption of the Slovenian government.

In fact, one group of port workers only wanted to block the shareholders meeting, but police prevented that – so they decided to block the port. The crane operator artfully says that this happened totally spontaneously: »Suddenly everybody downed tools, the office workers, too, and met at the gates.« In the end there were about 800 people assembled. The workers blocked the port entrance, so that no scabs were able to enter. The only cargo loaded was perishables. Everything else – iron ore for Austrian steel mills, timber for Styrian paper mills, cars of every brand for import/export, containers with consumer goods for Europe, etc. – went unhandled. By July 2, 40 trains to the hinterland were backed up; six couldn't even leave the port. Railway operators moaned about a loss of 700,000 Euros a day, but the crane operator says it was part of the negative media-campaign. A worker from the Cargo Center Graz reports that the number of incoming containers decreased dramatically in a very short time (with 16 weekly connections, the CCG is the most important hinterland-terminal of the port).

The crane operator says: »The carriers are under extreme pressure – with global decreasing volumes it is very important to be faster than everyone else; the best way in Europe is using the port of Koper, because one saves two to three days in one direction and a lot of money compared to Hamburg.«

Besides the cancellation of the planned changes in the management structure, the port workers demand the resignation of the infrastructure minister and of a secretary of the ministry of finance. They directed their demands to the Slovenian prime minister Miro Cerar, with whom they wanted to meet. He appeased them at first. It wasn't acceptable that workers would dictate anything to his government »from the streets«. Bourgeois media ran the usual defamation campaign: »terrorists«, blah, blah, blah… Against this, many friends and family members, even children of the workers, came out, joining the workers at the gates. On Sunday, July 3, there were about 1,500 people protesting in front of the port.

After only the first couple of hours of the strike on July 1, the shareholders decided to cancel the layoff of the three worker-friendly supervisory board members – instead the head of the state holding resigned. Nevertheless the workers continued striking till the early shift on July 4 in order to maintain their demands that the government members resign and that they get a meeting with Cerar. On July 5–6 the workers ran only one shift (out of the normal three) per day.

On July 6 the prime minister decided that he wanted to meet with the workers after all – this time his defense was that nobody wanted to privatize the port and that the workers had obviously been lied to. The workers listened to the prime minister, and came to the conclusion that he had no clue. They explained the situation to him and demanded commitment. Afterward, they went back to normal operations because their main goal – the cancellation of the plans of the national holding – has been reached. On the July 13 the minister of finance and his state secretary resigned. »Now we just need to run off the infrastructure minister too,« the crane operator proclaims confidently.

Unfortunately there were nationalists in the mix in the days of protests and striking – poison for every workers' struggle. Everywhere in Europe one can see what harm this does. Particularly in the southeastern European states, protests have developed strength only if they were explicitly anti-nationalist.

During the strike there was a solidarity slowdown in the neighboring Italian port of Triest, where workers took one-and-a-half days to unload ships instead of a half-day. From the neighboring Croatian port of Rijeka came one of many solidarity letters – that port is already privatized. Workers in Koper said Rijeka workers should also write to the Slovenian government (these three ports are historically linked by experiences of struggle: there was a »parallel choreography of worker unrest« from 1966 to 1971 2).

People from all over the region understand that it's only going to go well for them if it goes well for the workers. That's why a lot of people express their solidarity. The struggle represents their common interests.

The attack of the rulers has failed for now. The workers were able to maintain their status quo advantage. They show how strong a workforce that is self-organized and that sticks together can be.

The rulers will try to learn from their failure. They have to keep an eye out, so that there are no more uprisings like in 2012/13, or in Bosnia in 2014. 3 In any case, the port workers of Koper will walk very self-confidently into future conflicts.

In the middle of July, carrier websites report that COSCO was able to successfully bypass a strike of Greek railway workers who carry commodities from the port of Piräus to the hinterland – they redirected their vessels to Koper. SMS from the crane operator: »I will check for COSCO. The problem is that Koper uses our port pretty regularly anyway. I'll see whether anything changes.«

[1] The Sindikat Žerjavistov Pomorskih Dejavnosti, i. e., the union of crane and seafaring activities, has organized about 220 crane-operators. The union has about 390 members out of 840 directly employed by Luka Koper AG. Including its subsidiary enterprises there are 1,150 people. Another 500 work in all the sub-firms (temp agencies, etc.). One old union, which is, however, almost entirely inactive, remains, and it has fewer than 60 members. Ten women are members of the Anarcho-union, and generally women work only in the offices at the port.

[2] Sabine Rutar, of the Regensburger Institute for East and Southeast European Research, delivers a nice description of these strikes in »Epistemological Limits and European Contemporary History with Examples From the Northeastern Adriatic,« in: Europa Regional 22.2014 (2015), 3-4, p. 192-206 (German).

The only cargo loaded was perishables. Everything else – iron ore for Austrian steel mills, timber for Styrian paper mills, cars of every brand for import/export, containers with consumer goods for Europe, etc. – went unhandled. 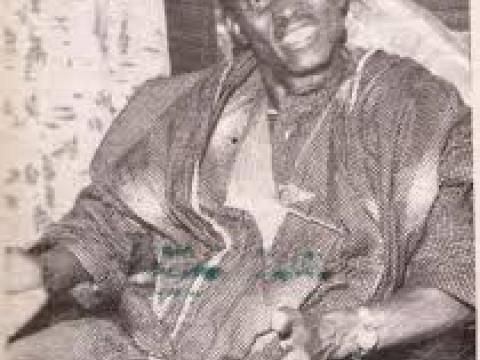 In 1945 a general strike involving tens of thousands of workers began with railway workers, then spread to other nationalised industries…

Wildcat interview with an auto-worker from the 5000x5000 VolksWagen project, a post-Fordist work restructuring experiment. 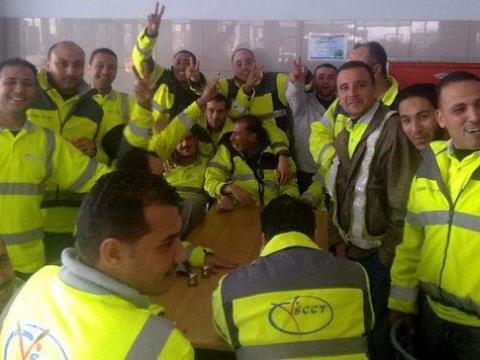 As the reshuffling of leaders continues, Egyptian workers are still trying to push forward their own… 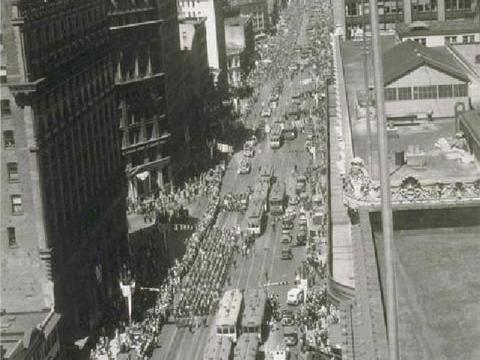