Detroit, Mich., Feb. 6.—The strike of auto workers at Briggs body plants has passed into its third week with strikers still holding out. The entire strikebreaking machinery of Detroit and the State of Michigan—press, police and employer's associations—has been brought into play against those unorganized but determined strikers. The majority of the 6,000 men and women, however, who walked out of the four Briggs slave-houses here, Jan. 23, refused to return to work.

The company-set deadline for striking employees to return to their jobs with guaranteed base rates much lower than the strikers demanded was passed Monday, Jan. 30—picket lines still intact at all plants and would-be scabs excluded. Since then ruthless strike-breaking tactics have been employed to disrupt the picket lines and demoralize the ranks of the strikers. This offensive of the Briggs bosses was directed especially at the Highland Park Plant. Here most of the Ford bodies are manufactured and Briggs officials, spurred on by Ford Motor Company's threat to start producing their own bodies, were desperate in their attempts to establish a flow of the much-needed bodies to River Rouge assembly lines.

Highland Park police, state police, and fire department hose brigades were concentrated at Highland Park Plant's main gate. Stragglers from the ranks of the unemployed, degenerate from long unemployment, were encouraged to take advantage of Briggs wide-open employment office by this imposing array of "law and order" forces. Under escort of heavy police guard, they were ushered through the dwindling line of Highland Park Plant pickets and hired in as workers in almost every department of the factory. These scabs were booed by pickets and sympathizers who thronged Manchester Avenues but no direct action was taken to prevent scabs from entering the plant all during the day. Scabs who left the plant at the end of the shift, however, were set upon by groups of strikers as they attempted to board streetcars. During the next couple of days several scabs were severely beaten by infuriated men on strike and several arrests were made. Briggs management protected these scabbing slaves by billeting 900 of them right in the plant.

Finally the picket line at Highland Park, which at the beginning of the strike numbered 2,000, was entirely disbanded. Company officials claim that the plant is completely manned, that many of the strikers have returned to their old jobs and that loads of Ford bodies will soon be escorted by squadrons of motorcycle cops to Ford River Rouge Plants daily.

So far, practically none of the 40,000 men laid off by Ford Motor Car Company because of the strike at the Briggs plant have been called back to work. Members of the Strike Committee, moreover, maintain that most of the metal-finishers, the division of body builders who started the walk-out, have refused to scab. Metal-finishers are about the most highly skilled workers in the whole body-building process. Without an adequate department of these workers at the Highland Plant, no bodies can be completed—even for Ford.

The strike at the Highland Park Plant cannot be considered a dead issue by any means. Encouraging rumors are filtering through the ranks of the Briggs workers still picketing at the other three plants, that attempts to organize and strike on the job are being made in departments of the Highland Park Plant. Organized, these men may soon join their fellow workers in a final effort to win the original strike demands for all concerned.

The strike at Murray Body Plant failed to make headway. Most of the 4,000 men who went on strike last week have gone back on the job. Leaders of this abortive strike are making every effort to organize Murray Body men for a real strike in the near future.

Strikers at Mack Plant, whose ranks numbers four thousand, still maintain their orderly picket line day and night. Toward the end of last week, scabs hired in at the Highland Park Plant were rushed through the Mack Plant gates in buses under police escort. Strike-breaking tactics of the auto bosses have called forth reprieves from strikers and sympathetic unemployed of the East-end community in the form of minor acts of violence. About 300 men charged a truck load of panels as it left the plant Wednesday. The driver was pulled from his seat and the panels scattered over the street. Saturday noon three streetcars which had been filled with scabs at the factory gates were stoned by a crowd of angry people a few blocks from the plant. All the windows of the car were broken and several scabs were injured. Mounted police charged down the sidewalk and dispersed the mob. Now a strike zone has been marked off both sides of the plant and the police line has been increased. Men wearing Briggs badges are allowed through to take their place on the picket line, which is still functioning 2,000 strong despite the zero weather. Officials at the Mack Plant have dipped into the slush fund maintained by the employers' associations of Detroit auto bosses for strike-breaking purposes. They have equipped an unoccupied wing of the plant with double-deck cots and a full-fledged cafeteria. 1,300 strike-breakers are now being accommodated by this set-up and so are saving their hides. Residents of the community remain friendly to the strikers and their cause.

The Briggs officials still refuse to arbitrate with the strikers as a group. They even snub the overtures of the mayor's sky-piloted "Fact-Finding Commission" whose preachers have offered to act as mediators. Repeated attempts of the Negotiations Committee to gain a hearing have been met by deaf ears on the part of the Briggs brothers.

W.O. Briggs, president and big-muscle man of the Company, is busy issuing high-handed manifestos to the local papers:

...I repeat, this strike can end in only one way, so far as I am concerned—upon the basis of the traditional American policy of free contract between employer and employee. This cause we will maintain in defense of every other American industry as well as our own.

At a conference with R.M. Pilkington, Commissioner of Conciliation of the U.S. Department of Labor, Wednesday, Judge W.F. Connoly, Briggs big-shot coupon-clipper, said it was "a long standing policy of the Briggs company not to recognize any labor unions."

These comic chimpanzees are staging a regular circus for those in the ring-side seats.

"The strikers don't like them," naively complains Rev. Ralph Higgins, chief "fact-finder" of the Mayor's Commission, to Chief Dan Patch of Highland Park, regarding State Police.

Norman Thomas in a lecture here intimated that the powerful position of Judge Connoly, Briggs Treasurer, in the Democratic Party of Michigan, may have considerable to do with Democratic Governor Comstock's reply to Chief Patch: "State Police will remain as long as you need them."

Politicians from the Communist Party are playing a strong hand for the favor of the Briggs strikers and the Detroit proletariat in general but are queering themselves with the rank and file as well as most of the outstanding men among the strikers by too much ballyhoo.

Rank and File Carries On

The majority of the 6,000 men and women who went out on strike are far from feeling that their struggle against starvation wages and Briggs brand of industrial tyranny will end in defeat. The dogged determination with which the Mack Plant, from which 4,000 of the strikers come, is evidence that the rank and file have plenty of fight left for carrying on the battle. The weather is freezing cold and it snows, but these courageous men and women take their turn at marching in the picket line. This Mack Plant line, which during the day reaches a strength of 2,000, is an inspiration to the strikers—to all Detroit workers who have seen it in action. Great credit must be given to Robert (Slim) Darrow, who came from the ranks of the strikers at Mack Plant as captain of the picket line, organized this fine picket line and has been its leading spirit since the strike began. Cornell, Mush and Johnson have also been doing excellent work, according to opinion current among picketers, as rank and file leaders of the Strike Committee.

Families of the Briggs strikers are holding out with aid of relief administered by their strikers own relief organization. At present they are also being aided by donations of food and clothing collected by members of the Detroit Council of Labor Youth Groups. The Council has plans under way for other relief activities.

The rank and file carries on. The metal-finishers, key men among the body-builders, are still out solid. Public sympathy remains with the strikers. Relief is reaching the strikers' families. The main picket line is still intact. The Briggs auto workers-strike determined to go back on the job with demands won, ranks organized.

Transcribed for libcom.org by Juan Conatz

Hah! I somehow missed the date in the intro and for a while was thinking that this was happening now. I was getting quite excited for a while.

That would be quite a feat, considering the Hudson Plant hasn't produced anything auto related in quite some time!

Politicians from the Communist Party are playing a strong hand for the favor of the Briggs strikers and the Detroit proletariat in general but are queering themselves with the rank and file as well as most of the outstanding men among the strikers by too much ballyhoo. 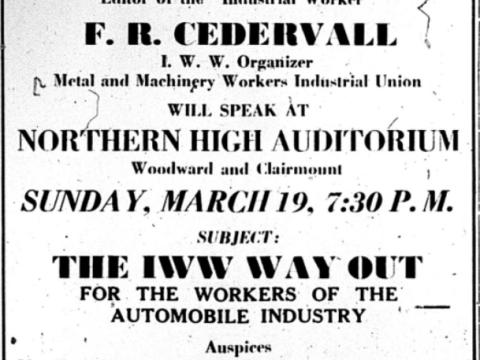 Big IWW drive is on in Detroit 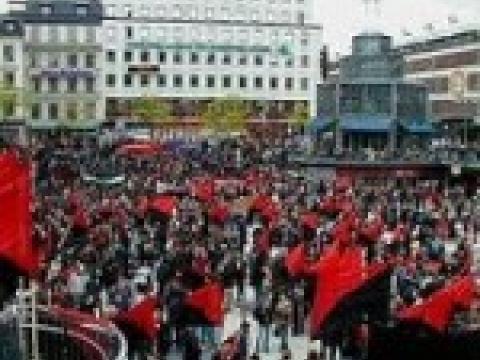 Ford times time on the loo

This article from the Detroit news shows petty measures introduced by Ford managers recently to raise productivity. The memo about toilet time is included below.

An article from The Detroit News describing a 1937 incident in which UAW organizers, in their attempts to leaflet at a factory in the Detroit…