Thousands of workers across England and Wales have walked out in support of 647 Lindsey oil refinery construction staff sacked for staging unofficial strikes.

It comes as Lindsey workers burned dozens of dismissal letters in protest.

Total, which runs the facility in North Lincolnshire, gave them until 1700 BST on Monday to reapply for their jobs.

The wildcat strikes involving about 3,000 workers are being held at eight sites including Sellafield in Cumbria and the Ensus biofuel site in Teesside.

Total said it was "encouraged" by the amount of feedback from workers involved, but would not know how many had reapplied for their jobs until the end of the week because of the number of sub-contractors on the site.

"Our government will be subservient to companies like this - but we won't" Kenny Ward, Sacked worker

The Lindsey workers first withdrew their labour on 11 June in protest at a sub-contractor axing 51 jobs while another employer on the site was hiring people.

Last week, Total announced it had dismissed 647 construction workers following the unofficial strikes. They had been building another plant next to the existing site in Killingholme.

Workers across the UK have walked out in sympathy, with thousands downing tools on Monday in unofficial action. They include:

• 900 contract workers at Sellafield in Cumbria

• 200 contractors at Aberthaw power station in the Vale of Glamorgan, south Wales

• 60 contract maintenance workers at Didcot A power station in Oxfordshire

• More than 1,000 workers at the Ensus biofuel site in Wilton, Teesside

Activists have said they expect thousands of workers to take action in the coming days in support of the sacked workers.

Bob Emmerson, Total: "This continued type of action could lead to dismissal"

Speakers at a mass meeting in a car park opposite the Lindsey refinery said the demonstrators were standing firm.

Phil Whitehurst, of the GMB union, told the crowd: "Let them show us how many want to go back in there crawling on their bellies for their jobs.

"We go out together, we go back together." Sacked worker Kenny Ward told the meeting: "Would Total do the same in France? Absolutely not, because there wouldn't be a tanker on its four
wheels.

The GMB is planning to stage a demonstration outside the Lindsey refinery on Tuesday.

The Lindsey workers are accusing bosses of breaking an agreement not to cut jobs while there are vacancies elsewhere on the site. Total insists no such agreement was in place.

28 Jan: Workers walk out over use of foreign contractors after local workers were laid off

5 Feb: Strikers vote to return to work after deal is struck

19 May: Workers strike over use of non-local labour in Wales

21 May: They return to work

Workers say the assurances were given in February following a bitter dispute in which they said foreign labour was being used to exclude British contractors and to undermine hard-won conditions.

The foreign workers row led to a wave of unofficial strikes and protests at refineries and power stations across the UK.

Last week, the firm was accused of pulling out of talks with unions at the conciliation service Acas.

A Total spokesman said it was hopeful that work on a construction project, which had been halted because of the dispute, would be able to restart in the next few weeks.

"Total wishes to stress that at no stage has it asked its contract companies to reduce their workforce's pay and conditions in any way and will not seek to do so.

"Total calls for all parties to respect employment law and to work together within the nationally negotiated agreements to which they are signatories."

Prime Minister Gordon Brown's spokesman said: "This is a matter between the management and workers, but we would hope it can be resolved as quickly as possible.

"It continues to be our view that the parties do need to talk - ideally through Acas."

"Construction workers at the centre of the class struggle"

BBC reporting that the employers have offered a deal to workers involving the reinstatement of the sacked 647 workers - if this is the case, this is a massive victory. 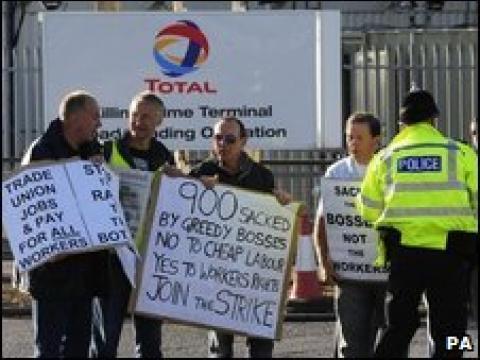 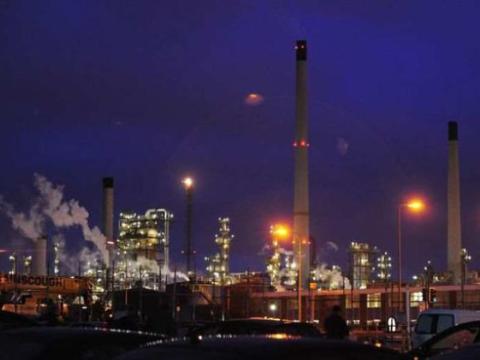 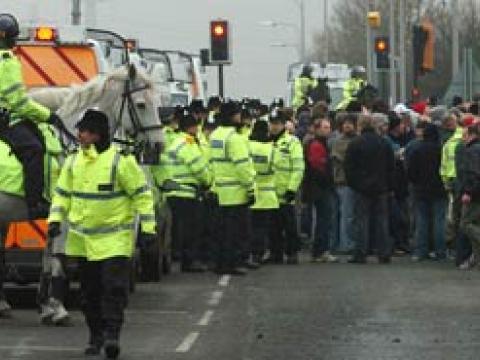 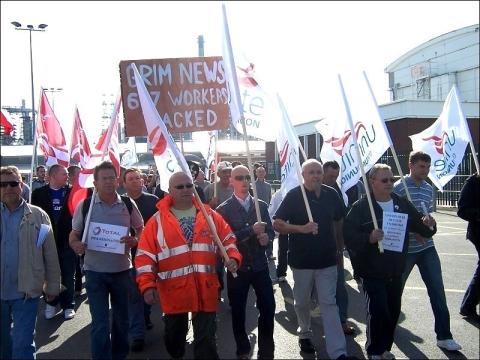