A short review of the TV series Romper Stomper.

In 1992 Russel Crowe made a breakthrough as an actor by portraying an Australian Nazi bonehead in the movie ‘Romper Stomper’. It was a visceral look at a sub-culture that gained notoriety in part for scenes of violence directed against Vietnamese immigrants. These were filmed in a way some saw as almost pornographic in their concentration and intensity. It was a powerful depiction that had faults, but was streets ahead of its latest incarnation, a 2018 TV series in 6 parts available in Aotearoa on TVNZ On Demand, that updates some of the specifics while retaining the basic dynamics.

In this version, we are drawn in by a physical confrontation in the opening scene. It occurs between a fascist group called Patriot Blue, who are harassing the local Muslim community and a group of black-clad leftists. By this confrontation, we are introduced to its main antagonists, whose paths will inevitably cross in the ensuing episodes. Perhaps this is as good a way as any to contrive to get most of the main characters in the same place at the same time. The problem is, while this mechanical aspect is achieved, it comes at the price of a shallowness regarding the politics of those involved since no solid foundational work is done to explain this. That later turns out to be the key weakness of this series. The politics is barely explored throughout and that’s a fatal flaw in a programme that surely should have its portrayal of politics well envisioned.

True, the fascists are no longer simply violent boneheads but have been suitably updated into Janus faced types. They can wear a suit and tie on TV and be pseudo-jovial when chatting with talk show hosts, then get into a punch up on the street. We get a few Henry Lawson quotes, some stilted sloganising, but no strong sense of what has really led these people into the movement or what their ideology is. This is even more so and less excusable when it comes to the anti-Nazis, who for some bizarre reason are named Anti-fasc (its not as if ‘Anti-fa’ is copyrighted!). We are never given any insight as to why the participants on this side join in something that often only leads to media misrepresentation, physical beatings and a host of other problems. Do they possess an underlying coherent political theory that underpins actions that flow from it, or are they doing this for the hell of it or what?

Confirmation that the politics take a backseat comes loud and clear later in the series when there is a home invasion. This makes a false equivalence between the two sides and seems to occur for no reason other than drama for its own sake. The politics is clearly just a thin backdrop rather than an integral element that truly drives the characters or makes them act in ways that they probably would in real life. Either that or it is arguing that these characters have no solid political perspective and are thus susceptible to slippery slope behaviour. The liberal centre starts to look like the absent hero of the story by default. That isn’t logical but it seems to be the conclusion you are expected to draw.

There is some mildly diverting back story to one central character who is clearly a psychopath, and this is quite well-acted. It's not a performance of the calibre that Crowe gave, but it holds a small spark of interest that the pathetic portrayal of the politics cannot sustain. There is also an ethically dubious populist talk show host that is well assayed since it’s a role that could easily slip into parody or comedy but here is played straight. Some of the minor characters among the second generation Arabs in the programme have potential, but this potential is all that it is at this point. You have to say overall that none of the acting is terrible, but it's more serviceable than great.

Who knows if a follow-up series of Romper Stomper is on the cards. The final episode (if you make it that far) ends with a cliffhanger of sorts that would allow for an extension of the story. Sometimes it takes a while for a writer or director to hit his or her stride so perhaps you could excuse this narrative and its many faults at this stage. On the other hand, much like Hitler, you kinda wish it would do everyone a favour by putting itself out of everyone else's misery.

The politics is barely explored throughout and that’s a fatal flaw in a programme that surely should have its portrayal of politics well envisioned. 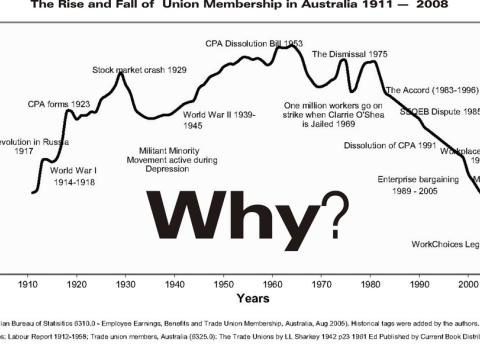 After the waterfront - the workers are quiet - LeftPress Collective

A book by LeftPress Collective on the history of unionism in Australia. It examines the decline of… 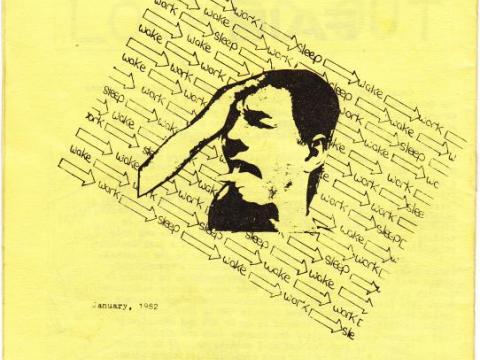 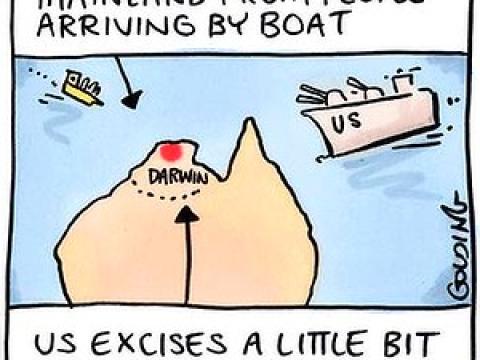 Australia is a society significantly penetrated by globalised capital, so much so that Australia is…