In an almost unprecedented move, rank-and-file Unison representatives in councils and schools voted in a special conference earlier today to tear up the 2014-16 pay deal which union leaders drew up with Labour Party officials and submit a new pay claim on top.

Anger has been brewing within the union ever since proposed strike action scheduled on 14 October, following our 10 July strike, was unilaterally called off by the union leadership to consult on a pay "proposal" from the employers, which was virtually unchanged from the previous offer which the union had rejected out of hand.

Having suspended the action, the union then ran a haphazard "consultation" exercise on the proposal and attempted to bully members into accepting it: claiming that the offer was the "best which could be achieved by negotiation" and that only "sustained, all-out strike action" could get a better offer.

Considering that, and the fact that it was clear the union leadership was essentially calling off the fight, members voted 64% to accept the deal, but on a very low turnout.

It was widely reported that the two-year pay proposal (an offer of 2.2% over two years) was come up with in secretive meetings between union leaders and Labour Party officials, to guarantee no further industrial action in the public sector's largest bargaining unit before the election and none in at least the first year of a potential new Labour administration. (Labour is already in charge of the Local Government Employers' association.)

Many branches campaigned for a rejection of the offer, but were hamstrung by a ban by the national union on electronic consultation of members, which effectively further suppressed the turnout.

Special conferences are extremely unusual in Unison. They can be called when branches representing 25% of the membership demand it. Despite there being a ban on branches communicating directly with each other (as opposed to through Unison's regional officials), the feeling amongst the membership was strong enough that this was achieved and the union had to organise the conference.

The key motion of the day, Composite C, called for the unpopular pay deal to be ignored, and instead a new claim lodged for 1 April 2015.

The union leadership, as well as some branches, argued strongly against this, saying that the agreement was the "democratic will" of the membership. However it seemed the tide of the conference with against them as anti-leadership speeches were loudly cheered while pro-leadership speeches met with a smattering of polite applause at best, and heckling at worst.

In the end the motion was passed by a substantial margin.

Activists also got motions passed with big majorities requiring that lay representatives be present at all future negotiation meetings, that strike action can only be called off in future following consultation with branches, and that branches can use online surveys to consult more members quickly.

Of course, what matters most in pay disputes is not what happens at these conferences and with motions, but in organisation on the shop floor.

However this was an interesting turn of events if nothing else because of how unusual it is in Unison, where the right-wing leadership, in bed with Labour Party, usually relies on the support of the majority of activists. But it seems that this time they may have gone too far in putting the needs of the Labour Party before the needs of their own members.

So it will be interesting to see what happens. Apparently the GMB and Unite have categorically refused to submit a new pay claim, so Unison will have to go it alone.

And workers should have no illusions that this time the leadership is going to be even more reluctant. So if we are really going to win anything: it's going to be down to us.

a ban on branches communicating directly with each other (as opposed to through Unison's regional officials),

Even for UNISON that sounds bad, anyone know if this is the same for other TUs?

There is one mistake. UNISON branches can communicate with each other. I think it's the GMB that bans communication that doesn't go through region. However obviously the UNISON bureaucracy does make it as difficult as possible and has a long history of fitting people up and witch hunting activists. Including shutting several branches down and colluding with employers to victimise members.

It is welcome news. However I have to say that without an grassroots organisation in place, or even the first few steps being in place to create one, then it's limited what can come out of this. Part of the problem is that what is left of the fragments of the left in UNISON is dominated by the SWP, Socialist Party and individuals on full time facility time. And in the case of the SWP and SP, and many of those individuals they are a block on creating a grassroots organisation. Those outside of them don't seem to have the ability or will to creat the first few steps. That's not a reason for doom and gloom, but it has to be recognised where we are at, and a way has to be found to start taking those first couple of steps, rather than shouting in to the wind with abstract slogans. In my branch we did create an activists group, that had about 15 stewards in it, most of them independent of any groups and new to activism. We did some great stuff (recruited lots of members, had political discussions, wrote bulletins, called work place meetings for the first time in god knows how long, renewed notice boards, got a local anti-cuts group going), but being isolated on a regional level and national level means you inevitably run out of steam. Personally I think we need that kind of thing, but in a few branches at the same time to create regional and national networks. How we do that, well that's another thing. 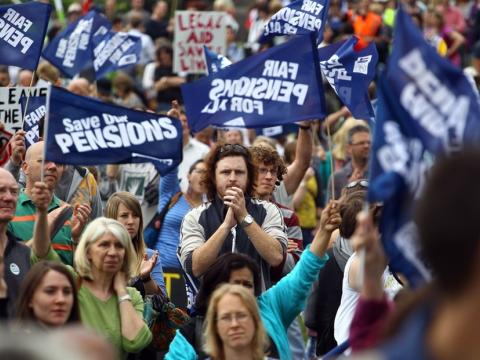