“He was the most modest of men” - Rudolf Rocker
Woolf Wess was born to a Jewish family in Vilkomar (or Ukmerge) near Kovno in Lithuania in 1861.

He was the son of a Hasidic master baker and at age of 12 was apprenticed to a shoemaker.

Early in his career, he worked as a factory machinist in Dvinsk and emigrated to England at the age of twenty in 1881, smuggled out to avoid military service. He learnt English and got a good knowledge of English conditions.

In 1885 the International Workingmen's Educational Club was founded in Berner Street in the East End of London. Wess was the Club's secretary and he was the first witness called at the inquest of Elizabeth Stride, an alleged victim of Jack the Ripper, in October 1888, whose body was found in the early hours of the morning in the yard next to the Club.

He was active in the Hackney branch of the Socialist League alongside Joe Lane and George Cores and he was a liaison with the Jewish movement through the Berner Street Club from March 1885 onwards. He acted as secretary of the strike committee during the strike of East London tailors in 1889, alongside Charles Mowbray and John Turner.

In 1891 with Yanovsky he went on a speaking tour of London and further afield. He spoke at South Place Institute on November 11th alongside Kropotkin, Louise Michel, Malatesta and Yanovsky.
Wess was involved from 1889 in typesetting of Freedom newspaper. He was manager of the Freedom office from 1891. When the landlord seized the assets of the premises of the New Fellowship Press where Freedom was housed, Wess transported type and materials to the house of Hermann Stenzleit, (see his biography here at libcom)) an old member of the Rose Street Communist Club. In 1893 Wess moved with Freedom to Camden Town. Freedom was housed in a very damp basement, and this effected Wess's health.This led to typesetting and printing being moved elsewhere.

He was a leading light in the setting up of a Jewish cooperative bakery in Brushfield St, Spitalfields. He became editor of Arbeiter Fraint (Workers Friend) in 1895 after Yanovsky left for the States in January 1894.

He worked hard, in a conscientious fashion, on the paper. He held the post for a year in Romford St, E1 before offering the job to the anarchist Frumkin. During his term he had to write practically all the copy and compose the type as well.

Wess was heavily involved in the labour movement and assisted in the foundation of many Jewish trade unions. He was a member and typesetter/office manager for the Freedom group. He wrote the appeal in July 1892 first published in Freedom which called for fair play for anarchist union delegates at the Zurich socialist congress. He was a friend of Kropotkin.

During the 1890s Wess founded and was secretary of the Federation of East London Workers' Unions; he was also secretary successively of the International Tailors, Machinists and Pressers' Trade Union, and the United Ladies and Mantle Makers' Association.

Wess withdrew from his activities in the Jewish trade union movement at the beginning of the twentieth century and took up a job as a book-keeper in a tobacco factory. In 1904 he shared a house in Leyton for 18 months with Tom Keell, the compositor and manager of Freedom and his wife Lillian (born Lillian Evelyn Hodges about 1874 in Walworth, married Keell in 1896). It all ended when Lillian and William ran off together. In February 1906 they were key figures in setting up the Arbeiter Fraint club in Jubliee street, Whitechapel ( Lillian tried to set up an Anarchist Sunday School around this time. Later, as Lillian Evelyn, she ran a school modelled on the principles of Francisco Ferrer, the Ferrer School in Charlotte Street, London).(1)

In June 1906 alongside Rudolf Rocker he served on the strike committee of tailors. He was involved in the reconstitution of the London Freedom Group in 1928-9 with John Turner and others. It closed down in 1931.

The group was revived with Wess’s involvement in the late 30s. According to Albert Meltzer Wess joined the Labour Party in the 30s even though he worked with Emma Goldman in Spanish solidarity work in 1936. Goldman appears not to have known about this.

(1) The school was located at 99 Charlotte Street, which also appears to have been the meeting place of the Italian anarchist group Gruppo di Studi Sociali di Londra. It was an evening school set up in 1919 and enrolling 25 children. Malatesta gave the opening speech in which he attacked the Church and the Spanish monarchy. Under the reversal of this name, Evelyn Lilyan, this intriguing woman was the secretary of the London branch of the Industrial Syndicalist Education League and was the only woman delegate at the 1st International Syndicalist Congress in London in 1913. The Manchester Guardian describes her as smoking "her revolutionary cigarette with the rest" (30th September, 1913). She was quoted in the Daily Mirror as describing syndicalism as "anarchy organised. We are out to overthrow the present system of society... We realise that the social revolution will involve bloodshed. We do not shrink from it" (1st October, 1913). She can be seen on left of photo of International Syndicalist Congress at The Origins of the IWW in Britain at libcom.

I was just searching for information on the East London Society of Ladies Tailors and came across this link. Nick touches upon the Jack the Ripper incident in his bio of William Wess. This just adds a bit more to that period.

Yes, I was told by someone who knew him, that Wess actually came across the body of poor Elizabeth Stride outside the Club. Affrighted by this, and believing that the Club would be implicated, he moved the body to the adjacent yard ( that'll get all the Ripper geeks in a tizz)

William Wess seems to have been the catalyst behind an effort to organize East End labour unions into an east end federation. Originally an attempt to organize a the Jewish Federation of East London Labour Unions, the specific reference to yiddish speaking workers was dropped in favor of bi-lingual and bi-cultural organization.

Here's the handbill announcing the first organizational of same:

Yes, I was told by someone who knew him, that Wess actually came across the body of poor Elizabeth Stride outside the Club. Affrighted by this, and believing that the Club would be implicated, he moved the body to the adjacent yard ( that'll get all the Ripper geeks in a tizz)

Here's what the "Workers Friend" wrote about the Ripper murders in 1888:

was this updated or something?

Yes, I updated note on Stenzleit, adding some info and deleting some errors. I hope to have a full biography of Stenzleit soon. I met with his great granddaughter this evening , who showed me photos of the Stenzleit family. I also hope to put up biography of a comrade of his, another German anarchist who lived in London, Otto Schreiber. 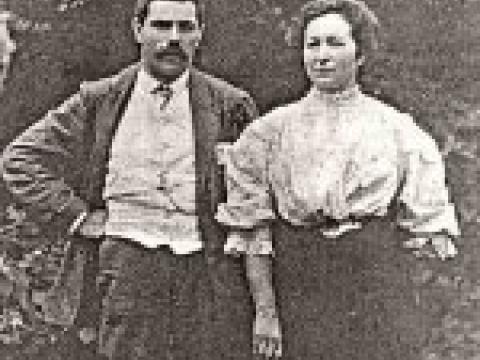