Life expectancy has increased, boosting the percentage of pensioners from 20% in 1960 to 50% in 2050. But the number of people paying into the pension system has grown steadily right up to the year 2010. Median productivity grew by a whooping 500% from 1960 to 2010. If that productivity is harnessed one worker in 2010 can pay the pension of one retiree just as easily as s/he could pay 20% of someone’s pension in 1960. One problem is that, even according to official figures, 23% of the young people have no jobs and can contribute nothing to anyone’s pension.

The worst case scenario of the Orientation Council on Pensions foresees a deficit of 120 billion Euros in 2010; that would be 3% of French GDP. There is a fact that the well paid alarmists want you to overlook; France is a very rich country. GDP doubled during the last twenty years and is expected to double once more by 2050. During the past thirty years 10% of GDP has been transferred away from wage earners and given to profit takers. That comes to eight times the current deficit of the national pension system. When pension deficits are caused by the transfer of wealth to the already rich, there is no outcry in the commercial media. By definition, those who own controlling interests in media companies are already much too rich to care about pensions. See.

The so-called reforms of 1993, 2003 and 2007 have already pushed pensions down by between 15% and 20%. This has forced one more million senior citizens below the poverty line. Half of the newly pensioned workers receive less than 1000 Euros per month. The group hardest hit is that of women who made sacrifices for the pension system by raising children at the price of interrupting their careers.

The biggest risk is that the contribution based system will be replaced by a capital based one. In 2008 we saw where that leads. Soon enough, there will be another mysterious, unforeseeable crisis and politicians will hand that retirement money over to the billionaires and their mega corporations leaving millions too old to work, too young to die.

Given political will, there are many alternatives. Deficits would disappear if tax breaks and subsidies for the wealthy were eliminated. Consider this number; dividends account for 10% of French GDP.

As so often, there are no "objective forces" making pension cuts an "unfortunate necessity"; there is only the greed of the rich and their lies.

Unconditional surrender or resistance; the choice is ours’ in France and everywhere.

This is pretty pathetic really - a massive struggle is erupting full of illusions but also full of perspectives that go way beyond pensions even amongst people hardly ever before involved in the class war, and all the CNT-AIT can say is:

Given political will, there are many alternatives. Deficits would disappear if tax breaks and subsidies for the wealthy were eliminated.

- mimiking the rest of the boring Left.

This whole text is an argument within the present capitalist discourse; its aim is to appear to be reasonable for spectators, so as to ....what? press for tax breaks and subsidies for the wealthy to be eliminated? recruit a few more people to the organisation on this basis so as to sell this line? What's the difference between that and any other Leninist other-directed discourse, trying to win people over?

Anger armed with theory and other weapons advances a movement, but this is just the kind of stuff that could appear in The Guardian.

Yeah, god forbid revolutionaries take on the subjects and 'facts' that are pushed by the media and the state.

The facts are vaguely interesting, but their use is typical leftist 'populist' - ie uncontroversially within the conservative discourse of the lowest common denominator of the movement. The CGT or the French CP could have written the same thing. When I say "an argument within the present capitalist discourse" I emphasise the "within" - it doesn't use these facts against this society, but merely shows a bit of their most glaring contradictions. God and the State will certainly not forbid such a non-revolutionary discourse.

You're certainly not up to speed on events in France: I'm assuming you're being ironic here, which, if you had been up to speed, I would not have assumed at all.

I NEVER said "demand nothing" Mr.Politician, but occupying everything would be a good thing to try to do and although "everything" might be a little difficult, it is not beyond the bounds of reason to do it as much as possible in the current climate (heavy rain), because that is what people are already trying to do.

Your parody of my post is typical of the partisan political mentality; you don't have to be for political parties to have the mentality of a politician, of a partisan distorting or deliberately reading something into what someone says in order to belittle them and in order to boost the ideology of your favourite organisation., in order to maintain a hierarchical separation not to struggle against it with integrity. I have a friend in the CNT-AIT btw but I doubt she would defend this leftist statement which I repeat here:

Given political will, there are many alternatives. Deficits would disappear if tax breaks and subsidies for the wealthy were eliminated.

She doesn't get on with those who lay down the political line . But do you agree with this notion of political will or do you merely assume the masses are not ready for the truth as you see it?

i'm not sure what the problem is? the cuts are being pushed through as 'economic necessity', but this is demonstrably bollocks, so pointing it out helps undermine the ruling discourse. that doesn't mean if there really was an economic necessity the attacks would be fine. nor as far as i can tell does pointing out there are plenty of capitalist alternatives mean you support them, i mean when the government says they're broke pointing out e.g. massive tax breaks has propaganda value. it's not the same thing as a the alternative fiscal policies of every leftist and their dog.

With 70% of the population "opposed" to this pension reform, getting the extra 20% (assuming the other 10% are the least likely to come round to any opposition to their comfortable misery) to "oppose" is not at all worthwhile. I put "oppose" in inverted commas because it's practice that counts and now opinion polls are saying that over 50 % are against any continuation of the struggle even though they, as spectators, are "opposed". Which is why I said

its aim is to appear to be reasonable for spectators, so as to ....what? press for tax breaks and subsidies for the wealthy to be eliminated? recruit a few more people to the organisation on this basis so as to sell this line? What's the difference between that and any other Leninist other-directed discourse, trying to win people over?

I actually don't think French capital really has any alternative if it's to sustain its competitivity - unless it attacks the working class in some equally vicious, but different, way - and any CNT propagandist is almost certainly aware of this, in which case they should be saying it (though that might reduce their recruitment figures), not pretending that it can all be sorted out without developing a conscious opposition to capital. Separating what you say to the "masses" out there and what you say to "revolutionaries" is a political mentality, and the political means become political ends as we have seen throughout history.

admin - advert deleted. You posted your articles here once, which was very helpful, but we do not permit multiple adverts for the same text. Please refrain from doing so in future.

see i agree, but i didn't read it as doing that. i think it is important that the rationale for cuts isn't simply crude economic necessity, but political (i.e. a matter of power, balance of class forces etc). i think posing it as 'political will' is problematic, since the will of the ruling class is always to attack us unless the balance of forces is reversed and we're on the attack. i think the best way to do that is probably to point out that the current attacks are an acceleration of ongoing ones dating from the 'boom' and before, rather than a regrettable deviation from 'normal' capitalism which was presumably rosy. but while it doesn't say that, i don't think it's saying one thing to the public and another amongst themselves, unless you think 'the greed of the rich and their lies' is dumbing down 'capitalism as usual' too much. anyway, bit of a tangent.

Hi "Libcom"!!!
I'm sorry to bother you but I didn't want!!!
Just that I wanted to post to all the people interested to current class struggle in France that (according to our possibilities and while worrying about internationalism!!!) we are translating in "Frenglish" (ah! ah!) some texts from the movement...
If it should be possible to coordinate all together our possibilities to do and NOT making the work in double, it should of course be better...
We are going on translating, so if somebody want to help (and BTW struggles are also starting in the UK... ah! ah!), please let's be in touch... 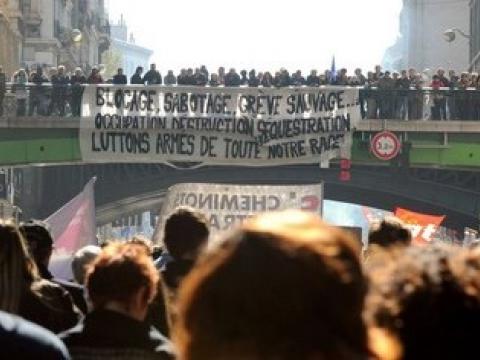 From self-organised French people in struggle

Henri Simon looks behind the pension reform demonstrations and sees discontent with politics and politicians, and with the capitalist system itself.