Will the Department of Justice Get Their Way in Seattle?

Seattle City attorneys officially threw down the gauntlet with the Department of Justice last week, filing court documents which challenged the “reliability and trustworthiness” of a recent DOJ report on the Seattle Police.

The DOJ report, which “finds a pattern or practice of constitutional violations regarding the use of force… as well as serious concerns about biased policing,” has been offered as evidence in an ongoing court case brought by Martin Monetti Jr. against the City of Seattle.Monetti, a Latino man, had his head stomped into the pavement after being told by then-Detective Shandy Cobane that he would “beat the [expletive] Mexican piss out of you, homie.”

This is just the latest move by Mayor Mike McGinn and the Seattle Police Department in their escalating strategy of resistance to the Department of Justice, who have repeatedly called for reform of the city’s embattled police department.

A violent department and the prelude to reform:

Seattle residents – particularly those in working class and non-white communities – have called for reform of the police department for some time, and for good reason; there have been a number of high-profile police murders in Seattle – not least of which was the shooting of unarmed Native wood-carver John T. Williams by Ian Birk, whose death sparked months of protest and outright attacks on police.

There is also the issue of routine instances of physical force used by SPD officers, which the DOJ has found to be “unconstitutional… nearly 20% of the time.” Of use of force encounters, moreover, particularly those in which impact weapons are used by police, “57% of the time it is either unnecessary or excessive.”

This, of course, is only of incidents we can statistically gather. The DOJ report also finds that in nearly half of all investigations by the SPD’s Office of Professional Accountability, officers did not include any mention or report of their having used force when, in fact, they had. It was also recently revealed that a whopping 100,000 dash cam video’s in police cruisers have “disappeared” during a lawsuit against the department by KOMO News.

Moreover, many residents may simply be too intimidated to take legal action against the department, as officers with the Seattle Police Officers Guild may go out of their way to intimidate citizens who dare even file complaints against the SPD.

Harry C. Bailey, in fact, (formerly a sergeant hired by Mayor Mike McGinn to improve community relations for the Police Department) made headlines for overseeing the filing of five lawsuits against citizens in 1994, accusing them of making false complaints with the department’s internal-investigations section – all 5 lawsuits were later dismissed when the guild simply abandoned them in court, leading many to speculate “whether the lawsuits were brought to have a chilling effect on others.”

The mayor and the police recognize that there is, if only in terms of their public relations, a problem with police violence in Seattle. They may contest the methodology used by the DOJ in surveying the department’s use of force, but they are politically savvy enough to recognize that at the very least, they have to feign reform.

The ACLU and the Seattle Human Rights Commission have put pressure on the city to address what the ACLU called a “consistent pattern that people of color were being targeted.” Crowds of black clad protestors have repeatedly attacked police and police vehicles, and Seattle Police Department spokesman Jeff Kappel recently revealed that the Department has become increasingly worried about a rising number of citizens becoming openly and physically hostile towards police actions in their neighborhoods, in which residents have physically prevented the police from carrying out their work.

In response, Seattle Police introduced what they call the “20/20 plan,” a list of 20 initiatives the department wants to implement in the next 20 months in order to create “a culture in our police force of respect for the community, accountability, and service to the public.” The ploy, of course, was to convince the public that DOJ oversight was unnecessary.

The city’s resistance to federally mandated reforms is unlikely to work, however, as city leadership has been unable to meet even the basic requirement of winning over the self-appointed community leadership of organizations such as the Seattle Human Rights Commission, the ACLU or El Centro de la Raza. These groups, and several dozen others, have repeatedly been denied access to negotiations surrounding reform efforts, prompting them to refuse further cooperation with the mayor and police’s 20/20 plan, which, they note, was never legally binding to begin with.

This complete break down in the city government’s ability to handle the escalating crisis has led many to speculate that a consent decree, in which Seattle allows a federally appointed monitor to help implement recommendations made by the DOJ, is on its way in.

Captain Dave Bailey, of the Cincinnati Police Department – the man tasked with overseeing similar reforms in his city ten years ago – said of the struggle between Seattle and the DOJ: “[SPD is] going to find out what we found out.” Namely, that the reforms are inevitable.

The Department of Justice, for their part, has their sights set on three aspects of Seattle’s police department.

The findings have been similar in other cities.

New Orleans’ current agreement, in fact, should sound very familiar to Seattle residents - a DOJ report there found that, amongst many other problems, the city uses “too much force against civilians, often don’t report it and, when it is reported, too often fail to investigate the incidents thoroughly.”

Indeed, it seems that the pattern with federal investigators and dysfunctional police departments has been the same throughout the country. More than a dozen cities, including Los Angeles, New Orleans, and Pittsburgh, have been forced to sign consent decrees by the Department of Justice, and this has not escaped the attention of reform advocates in Seattle; both Sharon Pian Chan of the Seattle Times, and by Linda Byron of King 5, have called for the city to “submit to its discipline (from the Department of Justice),” and for us to emulate Cincinnati, a city under federal oversight which is “a model for how police and citizens… [can come] together to make the streets safer for everyone.”

There is reason to be skeptical, however, about the claim that federal or independent oversight has come very close to solving any city’s problems with police violence, or of truly bringing “police and citizens” together. Just this month in Cincinnati, an 18-year-old college student was murdered by police for allegedly “charging towards them with clenched fists.”

It should be noted that while there does appear to be a statistical drop in use of force complaints while police departments are monitored, one problem with the consent decrees is that police departments tend to return to their old practices once the federal oversight has ceased.

In Pittsburgh, Witold ”Vic” Walczak, an American Civil Liberties Union attorney says of the oversight’s expiration, “I do believe that the culture of the department was changed [during the oversight], but that culture is now sliding back toward where it was.”

In January 2010, plainclothes Pittsburgh officers beat Jordan Miles, a black high school honors student walking to a relative’s home in a crime-ridden neighborhood. He said the police never identified themselves.
While the decree was still in effect, the number of complaints brought to the ACLU about police in Pittsburgh dramatically decreased, Walczak said. Now that it has expired, however, there has been an uptick. Indeed, similar attempts by federal authorities over the last several decades to reform the nation’s police departments appear not to have particularly long-lasting effects.

In 1981, the United States Commission on Civil Rights urged Cincinnati to curb its officers’ “lack of standards for using force” (a euphemism commonly used to describe the indiscriminate use of violence), and in 1981 and 1987, the city was pressured to sign two consent decrees surrounding discrimination within the department itself. And yet issues of brutality and racism still abound.

We should be clear on the fact that the worry for the SPD is not rampant police violence itself, but importantly, “losing the public trust.” Similar phrases are evoked in nearly every consent decree you can find, and it makes sense when you understand precisely what the authors mean.

When they concede that the community no longer trusts the police force, what they are really saying is “people are beginning to resist,” or “people are fighting back.” It’s instructive that both in Seattle and in Cincinnati, DOJ investigations were launched following riots and protests which targeted the police, not to mention the heated street fighting in Oakland.

Seattle City government, in fact, is still haunted by the specter of Occupy Wall Street, who on May 1st launched successful attacks against city banks and businesses in the downtown corridor.

In the age of economic downturn and austerity, authorities have realized just how quickly their cities can erupt. Of course, these ruptures require swift, violent police intervention. But it is recognized that this police intervention cannot operate without sufficient public support. As all of us (including the Mayor and Police) saw in Oakland, California, last year, it only took one brutal attack by police on a Marine veteran to turn virtually the entire city out into the streets.

The problem for city officials, then, is this: when police violence begins to exceed what Seattle residents deem as legitimate or normal, regular police functions become increasingly difficult. The Police Department becomes bogged down in extra litigation and investigations, and officers increasingly face a hostile public in their day-to-day operations, impeding their ability to function effectively.

McGinn and the Police, correctly, saw this ordeal as basically a PR battle – if they can simply remain legitimate in the eyes of the public, they can retain a reasonable amount of control during public disturbances. The Mayor and police, however, underestimated the depths of the wounds left after years of police violence, which lead to a fundamental miscalculation with the 20/20 plan. Because they are now entirely without support for it, they will have to rely on the DOJ to restore the city’s legitimacy, if it can.

The DOJ, then, far from being the benevolent father figure envisaged by Sharon Chan of the Times, simply serves as a safety mechanism for cities unable to meet the basic requirements of policing their citizens. They will, whether McGinn or the police like it or not, drag our broken department into 21st century policing, where a major part of avoiding unrest means sticking only to the “legitimate” uses of police violence.

Just this month in Cincinnati, an 18-year-old college student was murdered by police for allegedly “charging towards them with clenched fists.” 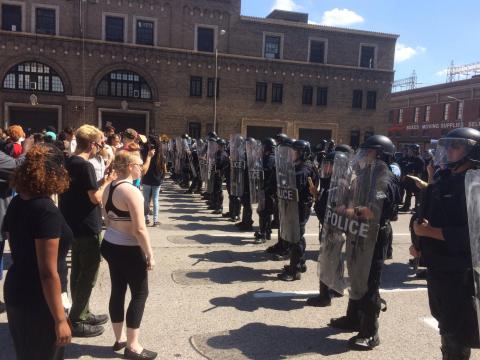 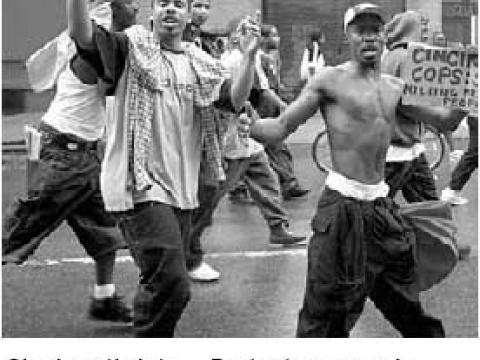 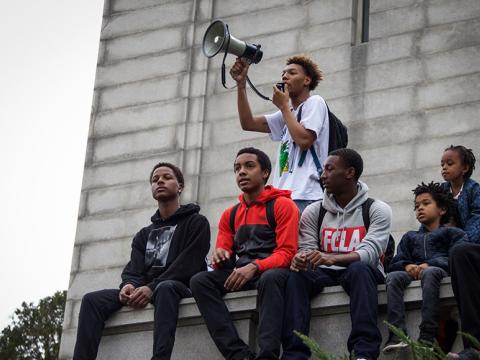