An update from Adam Ford on the dissent - and repression - following the fatal shooting of 25 year-old Manuel Diaz by police, in Anaheim, California.

Disneyland in Anaheim is emblematic of 'the American dream' - a make-believe world where 'good' always triumphs over 'evil' in the end, and childhood innocence lasts forever. Yet at the gates of this fairytale paradise, torrents of anger are being directed at police for the huge amounts of state killings in the area, and the guardians of the rich are responding with ever more militaristic displays of power.

The wave of unrest began ten days ago, when cops shot and killed 25-year-old Manuel Diaz. The chief of police immediately labelled Diaz a "documented gang member". According to the official version, Diaz and two other men were talking in an alley when police approached them. The men ran, and the officers gave chase, eventually firing at the unarmed Diaz, after he had thrown an object - possibly heroin - onto a roof.

Considering the local circumstances, it is hardly surprising that many of Anaheim's residents didn't find Diaz's supposed 'gang member' status a good enough reason to kill him. After, Diaz was the fourth victim of the city's finest this year alone. He was followed just one day later by 21-year-old Joel Acevedo. As far as gang war death tolls go, five in just seven months is quite prolific.

In the meantime, demonstrators had crowded the lobby of the Anaheim PD, as the chief held a press conference. They chanted "no justice, no peace, fuck the police", and "cops, pigs, murderers". And even as authorities moved to seal off the scene, they were met with rocks and bottles. Cops retaliated with rubber bullets, and a savage dog attack on one woman, which they later labelled "accidental".

Protests simmered throughout the week, before another police shooting - this time non-fatal - on Thursday, when tensions were brought boiling back to the surface. On Sunday, a mass demonstration of several hundred were faced down by mounted cops in riot gear and heavily armed paramilitary-style troopers protecting the police station. An impromptu march towards the tourist haven of Disneyland was headed off by hundreds of security forces. The demonstration was declared an "illegal assembly", and nine arrests were made.

Despite the obvious groundswell of anger, it is difficult to predict where this new movement is going. Liberal Latino group Presente is trying to channel energy behind a petition for an attorney general inquiry. As the history of policing shows ad nauseam, such an inquiry would inevitably whitewash Anaheim cops.

Ultimately, the brutal policing in Anaheim, the community's response to it, and then the authorities' nervous and draconian reaction all have their roots in the decaying state of American capitalism itself. With Anaheim's tourism-based economy stagnating since the onset of the economic crisis, official unemployment in the area is currently just under 10% - two per cent above the national average and a huge increase on 2006. The poverty rate is also rising, and is particularly pronounced amongst black and Latino people. With cuts raining down from everywhere, and a new wave of job losses about to crest, the authorities can only offer ever more draconian repression.

An inquiry here or there will never fix the problem of the growing police state. That is something only a massive class conscious movement against the super rich can achieve.

I like the increasing level of alliteration that characterises the titles of Adam's articles lately :)

The tensions are probably just as much based on housing pressures. Just looking at census tract data over time, you can see how the barrio centered on Santa Ana, the county seat, is creeping across Orange County. The insurgents in Anaheim only really know Disneyland from the broomhandle end. They are the service workers who toil for the tourist economy, but Orange County's economy was once heavily reliant on aerospace and defense contracting, but like for the rest of Southern California those industries started closing down in the 1980s. Skilled white workers once worked at places like the large Ford Aerospace plants in Irvine, Newport Beach and San Juan Capistrano. Many other high tech companies, like the computer division of McDonnell Douglas, had facilities all over Orange County. Those are all gone, and the hollowing out of the economy has drawn in increasing waves of low-wage working class Latina/os. Other parts of Orange County transformed from lily white to overwhelmingly Southeast Asian immigrants over the last 40 years.

Starting in 1984 community groups in Santa Ana began organizing against slumlords who allowed their ticky-tack apartments to fall into disrepair, expecting that the whole inner-city area would be razed with urban clearance gentrification. Those efforts led to a successful rent strike in 1985. Those social tensions still exist and are exploding over the cop killings again now. Much like how the Watts Rebellion in 1965, with pig violence being the spark, was rooted in the reduction of housing stock set against the backdrop of de facto Jim Crow housing policy segregating blacks into the worst ghettos of Los Angeles.

Racial profiling is standard protocol by the police forces of our country as the Government and Private Companies make millions of dollars off of locking up minorities. Read about the Privatized Police State we live in and my visual response to the Boys in Blue (bought and paid for by Wall Street) on my artist’s blog at http://dregstudiosart.blogspot.com/2012/08/the-privatized-police-state.html The young men who are lucky enough to keep their lives end up behind bars working for “sweat shop” wages. 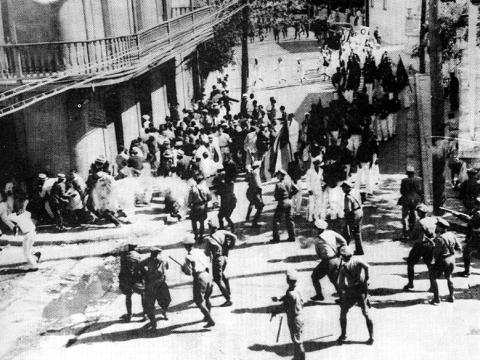