Born on 10th June 1904 at Coli, in Italy.  She emigrated to France at the age of 19 to join her brother Luigi, whose wife had just died. Luigi was a maximalist socialist and had fled Italy to escape fascist persecution. She then moved to Paris, where she moved in Italian exile circles. She moved towards anarchism, and established a relationship with the Bolognese anarchist Armando Malaguti. Her involvement in propaganda and solidarity work was much appreciated in this exile community, among which she had a good friendship with the Berneri anarchist family.

She was among the few anarchist women activists and gained respect for her energetic activity and her strong personality. The French authorities expelled Malaguti at the beginning of 1927 and she moved with him to Luxembourg, and then to Belgium. At Brussels Maria got to know Russian anarchist Ida Mett and her companion Nicolas Lazarevitch, and then Buenaventura Durruti and Francisco Ascaso. One member of the group in which she was involved was the university professor Giulio Manon, who was sentenced to 10 years for putting a bomb in the house of a judge who had handed out a heavy sentence to a young anarchist.

She was heavily involved in propaganda work and visited prisoners , pretending to be their aunt! This earned her the nickname of Aunt Marie! She was active in Brussels, alongside Angelo Sbardellotto and Bruno Gualandi in the defence campaign of Italian anarchists Sacco and Vanzetti which ended on the day of their execution with a general strike in Belgium in which workers turned out en masse despite the disapproval of the union officials. This was in no small way thanks to the activities of the three comrades who had heavily leafleted the trams in Brussels at rush hour time, whilst the union bureaucrats did little to mobilise.

Hunted down by the Belgian police, Maria and Armando left for Paris in 1932. There they met Ukrainian former guerrilla Nestor Makno and Volin.  Up until 1936 the couple went between Brussels and Paris.  Maria remarked about all these outstanding anarchists that she had met that they were all similarly exceptional, all modest and sharing an exceptional camaraderie. The press depicted them as people of action, but they were as at home with ideas and were all able to defend themselves well in debate.

In August 1936 after the start of the Spanish Civil War and Revolution Armando enrolled in the Ascaso Column in Spain and he fought at Monte Pelato on the Aragon Front. Maria moved to Barcelona to take part in the Revolution. For Maria arriving in Barcelona was like entering another world where one lived in full solidarity and fraternity. Malaguti was arrested in France in March 1937 whilst on leave in France and Maria returned to Paris to arrange support for the returning comrades, finding shelter and documents for them.

With the German invasion Maria was arrested by the Gestapo and interrogated for three days about the whereabouts of Armando, which she refused to divulge. Armando was later arrested and deported to a concentration camp in Germany and later to Ventotene in Italy. In 1942 she herself tried to cross the Italian border and eventually got to Ventotene. Subsequently Armando was transferred to Ustica and then to the concentration camp of Renicci d’Anghiari from where he escaped on 8th September 1943. The couple then worked in Bologna in anti-fascist activity.

Armando died in 1955 and Maria established a relationship with the anarchist Alfonso “Libero” Fantazzini, who had fought as a partisan and who she was already acquainted from her exile years.  Their home became an important reference point for anarchists living in Bologna or visiting, thanks to the hospitality of the two old militants. Despite her fragile appearance Maria maintained a contagious energy.  She had a quasi-maternal role for the young militants of the new generation and became a tutor of Libero’s son, Horst - later famous for his exploits as “the gentleman bank-robber” and his long periods of imprisonment!

During the 1970s she was active in agitating for the release of framed anarchist Valpreda. She took part in the conferences and meetings of the Italian Anarchist Federation up till the 80s when she was struck down with a grave form of paresis. Her illness and the imprisonment of his son caused a rapid psycho-physical deterioration in the health of Fantazzini and he died on 14th December 1985. Maria spent the last years of her life in a hospice, dying in Bologna on 5th January 1993.

“The anarchist movement is always my point of reference, the idea is always the same and I am happy to see young comrades work with conviction” 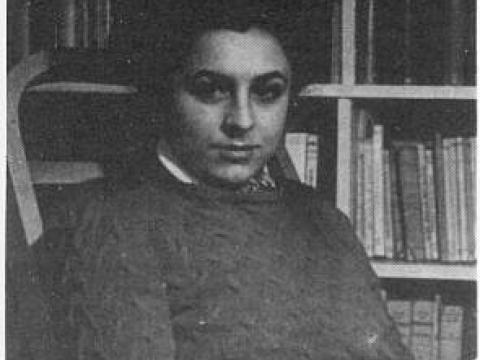