I take the 254 and Graeme Archer can sod off.

This is a couple of days late, mainly because I've been pretty busy, but I've been somewhat annoyed by an article by Tory activist, political blogger and burgeoning Telegraph columnist Graeme Archer. He makes the erroneous assumption that I as a fellow bus-taker have anything whatsoever in common with his mean-minded slagging of the Archbishop of Canterbury.

Now don't get me wrong, I have no particular torch to bear for the avowedly liberal and yes, somewhat out-of-touch Rowan Williams, other than finding his soft touch approach to the church's declining fortunes to be rather less offensive than that of John Paul to Catholicism.

But Mr Archer does not speak for me or my priorities in life and his attempt to portray himself as a man of the people is laughable.

The man's current day job (which if his recent spate of musing for the Telegraph is anything to go by will soon be replaced by full-time haranguing of the world for not being to his taste) is as a statistician (average London wage: £44,000), while his partner is an electrician (average salary £31,000).

This gives his household a total of around £75,000 a year to play with - not bad when the average is about £26,000, not taking into account around 2 million unemployed. It puts Archer's household in the top fifth of earners in the country and more than triples my particular take-home. It puts them 20 grand above what one survey of inner-city kids in the 1990s discovered, which was that many thought of £50,000 per annum as the preserve of the super-rich.

So when he talks about "us failures," he is in fact talking about "failures" like himself who live in circumstances which are well beyond what most people can ever expect.

With this in mind then, lets look at what he's actually saying, this defender of the average Joe.

our hopes and fears are not those that keep the Archbishop of Canterbury awake at night.

Your hopes and fears are not what would keep most of the 254's users awake, either, Mr Archer. "Where's my gold back-scratcher" isn't one which keeps me tossing and turning.

The people most scared, apparently, are those affected by Iain Duncan Smith’s welfare reforms – reforms designed to ensure that anyone who takes a job is better off than someone who chooses not to, and that no family on benefits should receive more money than a working household on the average income. Scary stuff, indeed.

Ah yes, "apparently." Because you in your infiinite fucking wisdom as a man who looks to be earning something like 13 times the £3,338 per annum of a JSA claimant (minus regular deductions) know exactly how people on benefits and very low incomes are feeling about IDS's reforms. I imagine you end up chatting all the time to people who are having their benefits cut out from under them. I'm sure all your mates are claimants or people on very low income, aren't they, Graeme.

The Archbishop is not in the same linguistic league as Mr Cruddas, but he may be even less worldly ... fairness isn’t about protecting us from the consequences of our life choices. It is about making sure that people on barely adequate incomes – that is: most of us – don’t get done over by governments who prefer to tuck worklessness under the carpet by ignoring the moral concept of personal choice when determining how to assist the poor.

Again, I'm sure your judgement as a man whose own place in life is secure, who benefits from higher spending power in a country of massive inequality is impeccable. I mean, obviously poverty is all about personal choice, there's jobs for all if only we reach for them, everyone could earn like you if they just tried hard eh Graeme?

I mean, it's just because people living off the bare bones in a situation of mass unemployment worsened by a deliberate policy of trying to put pay on a par with that of people who come from a background of even greater poverty are lazy that they're in financial trouble, isn't that right?

we’re not fascists because we make a distinction between the deserving and the undeserving when we see where our tax is spent.

No, you're not a fascist. But you ARE part of a privileged elite, one which talks about "deserving" and "undeserving" poor because you are too far removed from the masses' everyday life. You are worse than the likes of Rowan Williams and John Cruddas, in fact, because not only are you unworldly, as they are, you haven't even the goodness of character to care about anyone but yourself and those you deem worthy of your charity, even from your place on the podium riding high above the shit everyone else has to deal with.

I actually think the Arch Bishop is one of the most interesting people in our centre-right liberal elite right now....

This post is coming a little later than would be usual, as I just took my first proper (non-anarchist-related) break in what seems like ages after Projectile finished and only just got back from it.
Image 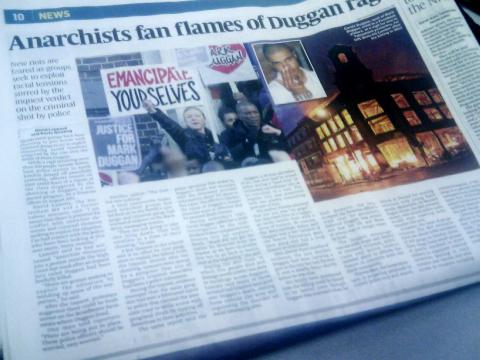 I’ve recently been having a lot of fun with old bits of paper at Freedom Press indulging my mild archiving OCD, as preparations are made to move the building's retail arm downstairs by our tame shop-guru amid a serious change-around.
Image 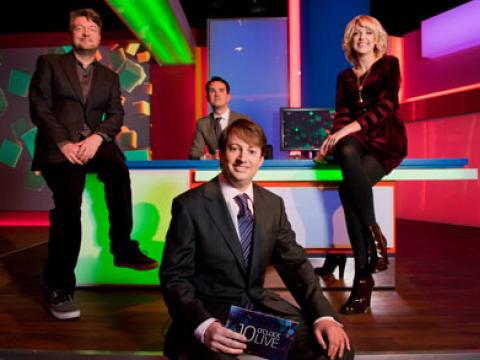 I can't tell whether the 10 O'clock Show is going to be any good in the long run, but I can spot a piece of new Labour bullshitting from a mile…