A detailed summary of today's events, include a Cyril Ferez update including demonstration counts, rail blockades and school strikes.

-Demonstrator Cyril Ferez remains in a coma, in a state "between life and death". Various information has been released. Police say that he was drunk, with 2.7grams of alchohol in his sugar. Last night they said he was attacked by demonstrators, this now appears to be a lie - footage now being shown on French news shows three CRS police beating him with truncheons before he falls to the ground.

-French Prime Minister Dominique de Villepin declares: there will be "neither withdrawal nor suspension" of the CPE.

-Lionel Jospin, former Socialist Prime Minister, denounces the CPE as an "idea of the ancien régime"

-Grenoble students this morning voted to continue the blocking of the university with a vote of 4,000 for and 1,700 against. From Indymedia Grenoble.

-57 universities 'disturbed', 15 blocked (according to the Ministry for Higher Education

-814 schools also affected, 49 in the Aix-Marseilles region, 35 in Paris, 19 in Nice as the "movement grows amongst high-school pupils more and more", says Le Figaro.

-Two of nine arrested yesterday in an anti-CPE demonstration that turned into a riot in Corsica have been sentenced to a month in prison.

-The FCPE, the leading French high school parents body, calls for a day of 'ecole mortes' to coincide with the strike called by trade unions for Tuesday 28th of March.

-Thousands demonstrate across France (40,000 according to police). In Paris, teargas is fired in the vicinity of the Sorbonne around 5.30pm French time at the end of a march of 15,000.

-In Clermont Ferrand a demonstration of between 3,000 (police estimate) and 4,000 (organisers estimate) took place.

-Spontaneous march of 1,500 young people in the streets of Mâcon this morning.

The strike and the demonstration had been decided the morning at the entry of the schools. The presence of a score of young people wanting a fight with the police force, a few moments of tension with dustbins and billboards turned over. [from Indymedia Grenoble]

-In Besancon, the main train station was blocked by protesters.

-Politicians have been posturing.

“Moved by egoism, Dominique de Villepin is imprisoning France in his personal destiny. He does not give a tinker’s damn that France is breaking apart”, said one Parti Socialiste deputy, members of Villepins UMP party left the debating chamber in protest.

Bernard Accoyer, UMP parliamentary president, insisted upon his party’s unity behind Villepin, saying that “The UMP deputies are convinced that we must hold firm - the street cannot prevail over the law.”

Despite this, members of Interior Minister Nicolas Sarkozys' entourage have in fact been criticising their rival for the leadership of the right, Dominique de Villepin.

The UMP deputy Nadine Morano said today of Sarkozy when. “He explains, he talks, then he acts. He has a real talent for pedagogy, explanation and action all at the same time,”. 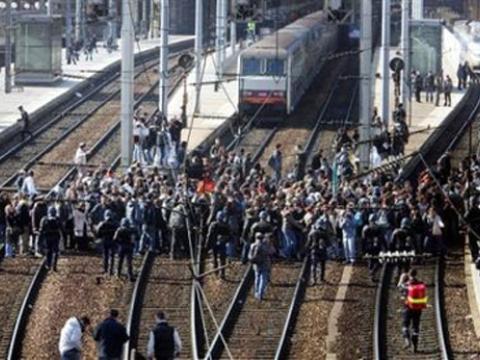 CPE: Youths give lesson in solidarity

Sporadic protests and blockades across Brittany this afternoon

A round-up of some of this afternoon's events in Brittany, where like across France, high school and university students have been protesting against the CPE.