Much of the what will appear in this thread will have come from a variety of sources, including the mainstream French press and alternative media such as Indymedia Paris.
9.50pm French time
Justice Pour Cyril Ferez blog launched for the injured demonstrator who lies in a coma. The site includes a section of videos and photos showing Ferez being dragged by CRS riot police forty minutes before he was found unconscious in the Place de la Nation. 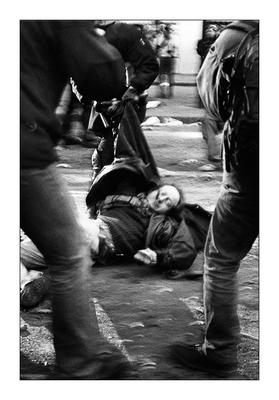 9.34pm French time
A 20 year old student has died of heart failure, Wednesday March 22nd, in the buildings of the Marc-Bloch university of Strasbourg. The student had been involved in the occupying of the building. There are no sign of foul play.
9.25pm French time
According to students union body UNEF, 68 universities were 'disturbed' in some way today, by either strike, blockades, or blockaging. AFP, the French press agency reported the figure as 62, the Education Ministry, 59. These figures suggest a slight rise in disturbed universities compared to previous days.
8.44pm French time
"the most eminent proof of good faith, would be to test the CPE and to make an assessment six months on" say French Minister Gilles de Robien, echoing Sarkozy's suggestion
7.40pm French time
the employers' movement Ethic "deplores" the "catastrophic consequences" of the CPE on the image of employers
6.01pm French time

Five trade unions of the RATP, the major transit authority responsible for public transportation in Paris and its environs, launch a call to strike on March 28 against the CPE
5.41pm French time
The "dialogue of the deaf" on the CPE "becomes dangerous", says Parti Socialist deputy Henri Emmanuelli
5.11pm French time
8 trade unions of Air France announce "work stoppages from 03h20 for 24 hours" for Tuesday March 28th
4.44pm French time
The youth wing of the hard right Mouvement Pour France denounce the "scandalous laxism [being too lax]" of Sarkozy with regard the rioters in margins of the anti-CPE demonstrations.
4.05pm French time
Sarkozy distances himself from Villepin as CPE crisis deepens. See article below.
3.15pm French time
Parliament now sitting. "Courage is not obstinacy, courage today is to withdraw the CPE" says François Holland, "you take the risk to of engaging in a confrontation with the country"
"What drives us, is the wish to act in a solid, effective and right way for young people, and their future" says Domenique de Villepin.
2.30pm French time

Symbolic Eviction of U.M.P. M.P. Jean Marc Nudant
Leaving behind a banner proclaiming, « They want to put us out on the streets, now it`s your turn ! » a group of around 40 masked intruders entered the offices of M.P. Jean Marc Nugant and to the surprise of passers by removed most of the office furniture and equipment and plants out on to the pavement in front of the building.
Having clearly signified that they didn’t intend to be evicted by either the C.P.E., the State nor the bosses they peacefully left the scene of their action.
from paris.indymedia.org
1.06pm French time
According to the Ministry for National Education, 18 universities are blocked and 41 disturbed this Wednesday, up from a total of 57 disturbed yesterday.
12.47pm French time
Villepins colleague, Interior Minister Nicolas Sarkozy, favorable to an experimentation of the CPE for six months.
11.33am French time
The anti-CPE movement grows in the high schools of the Pyrénées-Atlantiques region, with ten newly affected establishments.
10.05am French time
Between 800 and 1000 young people block the main access roads to the town of Poitiers
-10am French time
Yves Jego of Villepins UMP, on Europe 1: "I think that Nicolas Sarkozy will express himself soon" on the CPE.