An article by Tor Cedervall that see capitalism and fascism as related, and one cannot fight the latter without fighting the former.

In the world today we hear a great amount of talk and also some degree of organization about and around the issue dubbed "Democracy versus Fascism." Many liberal and humane-minded persons, as well as self-styled radicals, the world over are huddling under the banner of "Democracy" in horrified opposition to Fascism.

In the United States these people supported Roosevelt in the recent elections, side with the "Republic" of Spain, feel a dependent fondness for Great Britain as the fairy godmother of Democracy while she steps designedly into every "situation" with her celebrated "diplomacy," give varying degrees of approval of Soviet Russia, and reserve the hate their simple souls can generate for the black fascist regimes of Italy and Germany. 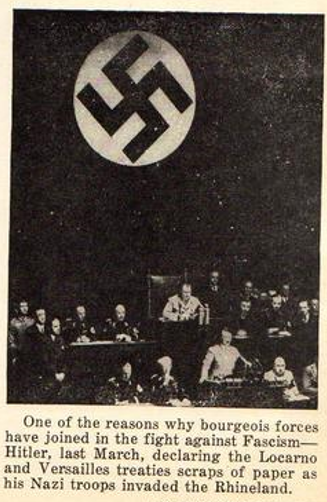 The philosophy of the out and out liberal of this conglomerate group is that while Fascism is a surly, horrible thing. Capitalism as such is very desirable and should be preserved, albeit improved from time to time.

The "radicals" of this democratic movement are in their hearts not content with Capitalism, but are so frightened by the prospects of Fascism that they are hysterically choosing the fatal Germanic policy of the "lesser evil." Throwing all pretense of radicalism to the winds, these people have crawled out of the dread and darkness of their social cyclone cellars to become the blatant champions of Capitalist Democracy.

The slogan of each group resolves itself into—keep Capitalism, but keep out Fascism!

This slogan, however, is historically incorrect; we cannot keep in Capitalism and at the same time keep out Fascism. Fascism is but the logical development, the irresistible outcome of the class antagonism of Capitalism.

Recent history is bearing this out inexorably. Several nations are already frankly fascist, many more are tending toward that direction. It is a steady albeit uneven, petrifaction of international capitalist society into the hardened forms of fascist death.

Why does fascism everywhere appear as the fated affinity of Capitalism? Why is it that capitalist "Democracy" cannot withstand the attacks of this monster? 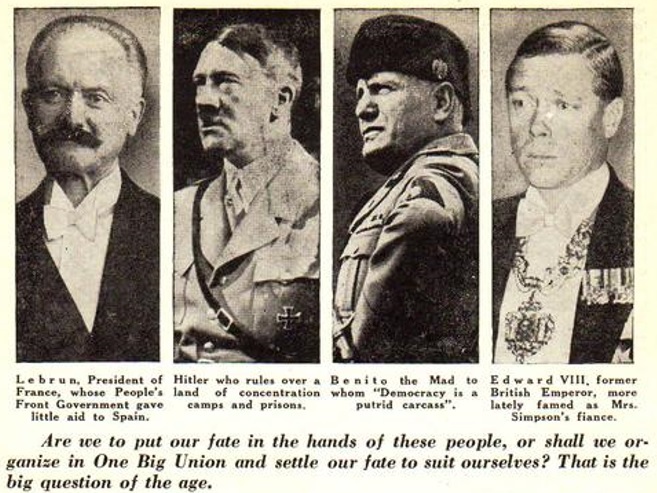 At the time of the classic overthrow of feudalism there was no thought of the "Capitalism" of today. All classes subject to the authority and parasitism of the aristocracy and its church—the budding bourgeois, the equally budding "worker," and the peasant were united in a "people’s front" against feudalism.

Because of the authoritative and caste character of feudalism and the intellectual repressiveness of its church, the intellectual and cultural chanticleers of the new day declared the invigorating doctrines of democracy. The "freedom of man" became the inspired rallying cry of the new social order. This, combined with the confused and muddled class interests of the various groups in the "people’s front," none of which had formulated a clearly-defined political and economic policy for itself (and which would have been too weak alone to have imposed it if it had) made democracy the logical pattern of the new political forms.

However, that democracy is not the innate mate of Capitalism is clearly seen by the methods employed by Capitalism everywhere in its development. Where was democracy in the colonial policies and piracies of the democratic nations? Where was democracy in the United States which countenanced chattel slavery naked and unashamed until 1863? Where is democracy up until this day in the industries of Capitalism? Symptomatically defined, Fascism is force and violence. Has not Capitalism always practiced an incipient fascism at the point where its profits are produced?

As for the general domestic democratic forms of government, however, how has Capitalism managed? Ideally unsuited for it, Capitalism has nonetheless in some respects turned democracy into a very powerful aid for itself. Democracy has been of incalculable benefit to Capitalism in its development by serving as a smoke screen for its autocratic exploitation. It has with surprising efficiency served as a social control to combat the rebellion against the concentration process whereby the overwhelming majority of the populace has been reduced to "wage-slavery." Political freedom has obscured industrial serfdom.

In view of this very positive gain from democracy, the capitalist class has with more or less grace subjected itself to the expenses and inconveniences of democracy. Any dangers that might arise through it have been neatly evaded heretofore by outlay to politicians and political parties who have proved themselves very willing to safeguard the interests of the capitalist class and do its bidding with fawning servility.

However, as the relationships of Capitalism are becoming more thoroughly understood, as a pauperized proletariat (actually or relatively) is beginning to stand up in open defiance of its exploiting masters, as strikes and union organizations become larger, as tile ballot box becomes fore-doomed to partial control and eventual capture by the numerically largest group in society—the working class, Democracy must go in order for Capitalism to continue to exist. The bed-rock principle of Capitalism, is the exploitation of the working class, and no group conscious of its subjection and determined to end it can be restrained except by large scale force. Fascism supplies that force—"Democracy" cannot, particularly when its political forms threaten to pass into the hands of the exploited through a "people’s front." When the latter happens, or threatens to occur, or when faced by widespread labor unionism, Fascism will make its supreme bid for power, is in Germany and Spain, as it is preparing to do in France.

The phenomenon of Fascism is not always simple and uniform in its development. There is a great unevenness throughout the world that may serve to mislead tile unwary into the belief that Capitalist Democracy can be preserved and a fascist coup d’etat prevented. President Roosevelt, for example, is regarded in America as bulwark against Fascism. But, Fascism is still out of the saddle in Washington because Democracy is still under the control of the capitalism class. The "radical" reputation of the President has aroused the hopes of the yet confused American proletariat and its members thus remain at least temporarily quiescent under the rule of their capitalist masters. It may be, too, that the "people’s front" in France, timid and largely unwilling to introduce drastic changes, yet holding the confidence of a trusting proletariat, may still continue to serve largely the class interests of the employers without the necessity of a fascist coup for some time.

Is this the kind of democracy we want? A democracy that is suffered because it presides over an exploited and deluded people unaware of their real interests? Fascism will remain submerged only as long as "democracy" remains workable for the capitalist class; that is, as long as the workers remain content as a submerged and exploited class. `Tis small glory in such democracy or the victories achieved in its name.

The Roman Holiday of Fascism can be thwarted not by hurling the pitiful shafts of a sham capitalist democracy against its iron legions. Only the grimly alert, courageous advance of an organization resolutely determined to root out Capitalism can be expected to "mop up" Fascism. Alternatives are few in dangerous situations. The working class has positively no "stake" in Capitalism; but, even if you fancy that you have, the world cannot eat its cake yet have it too. Preserve Capitalism, invite Fascism; build a cooperative commonwealth and smash Fascism. Out of this a new democracy shall arise—the industrial democracy of cooperative labor.

Originally appeared in The One Big Union Monthly (January 1937)

The two Cedarvale brothers were quite interesting...and quite different

How so? I've done some background research on Frank but don't know as much about Tor.

By accident, I stumbled upon the information that Tor eventually became a Democratic city councilperson in Rahway, NJ in the 1970s. His brother, Frank, was still doing IWW speaking tours. So, yeah, syndicalist, I see what you mean.

One difference: Frank recounted being won over to radical socialism by reading things in the public library, then walking across the Lorraine-Carnegie bridge to the IWW office. One newspaper article I read about Tor said he was won over to socialism by working with his father, an elevator repairman, and watching his father beat a foreman with a pipe wrench. Tor was beaten up by private security very badly during the failed janitors (then called "charwomen") strike at Terminal Tower in Cleveland and some time later became an organizer for MESA.

Notwithstanding the stuff about unions and "industrial democracy of co-operative labour", this is a good article.