"AIDS!" her lips curl about the syllable. "There is no such thing. It is a false disease invented by the American government to take advantage of the poor countries. The American President hates poor people, so now he makes up AIDS to take away the little we have."

What about the famous plagues of ancient Egypt? They provide an atavistic component to the whisperings and prayers of the bourgeoisie. They are the "fundamentals" of the Fundamentalists. Did not the Lord of Hosts, the wrathful Yahweh, sling down plague and pestilence to those who got in the way of the "Chosen People"? Listen to the voice of the chief physician of the Baptist Mission Hospital outside of Port-au-Prince (one-third of whose beds are unoccupied): "Fornication. It is Sodom and Gomorrah all over again, so what can you expect from these people?" (Life magazine, August 1987).

The plagues of the Old Testament took place in the 13th century B.C.E. They are the pestilences described in the Book of Exodus. But what is this book? It was composed at least three hundred years afterwards, during the reign of Solomon. It summarizes cultic recitation, song, and chronicle: or, the official myths of an ancient state, and must therefore be treated accordingly.

Zora Neale Hurston speaks of them as pan-African stories. The pestilences are exercises of the magical machismo of Moses, a man with a stick, a rod of power, a serpent god who leads slaves to freedom. He must fight the Egyptian oppressor and the Egyptian gods. The victory over Pharaoh is a victory of superior magic.

Moses throws down his stick, and it becomes a serpent. He dips it in the waters of the Nile, and the waters turn to blood. He stretches his staff over the streams, and frogs fall all over, even into ovens and kneading troughs. He strikes the dust on the ground, and maggots spring up everywhere on man and beast.

Flies, hailstorms, locusts, eclipses, pestilences, boils: Moses and his stick bring all of them, and Pharaoh's magicians are stumped at every turn. Thus does Yahweh defeat the frog goddess, the sun god, and the cattle deities.

Such serpent-and-stick power is a living power in Haiti and in Dahomey as Zora Neale Hurston discovered. How did Moses, the leader of slaves and outlaws (for these are the Egyptian meanings of the word "Hebrew") obtain hid magic? He learned it from Pharaoh's stable boy, Mentu. Moses says to him, "I love you because you know all about the beginnings of things and you tell me about them. You tell me such nice lizard talk."

But Mentu did not give his knowledge for nothing. Moses brought him scrams from Pharaoh's kitchens. "Roast pork at Pharaoh's table meant boiled hog head for the help." With his new pupil Mentu could say, "I am eating further back on the hog now."

The class relations of magic-knowledge are made clear. It is concocted in kitchens and stables, exchanged for a price, and only then comes the familiar, ambiguous story of rebellion, massacre, and new kingdom. "’No more toting sand and mixing mortar! No more taking rocks and building things for Pharaoh! No more whipping and bloody backs! No more slaving from can't see in the morning to can't see at night! Free! Free! So free till I'm foolish.' They just sat with centuries in their eyes and cried."

Certainly, this is a version that only is possible after the liberation of the Afro-American, the historic person who straddles Christianity, Judaism, and Voodoo. The reading of the Egyptian pestilences supplied as a result of that experience is the opposite of Luther and Calvin, the gods of capitalism, whose Gospel was really "Work or be Hanged."

From Cairo to Madison, The Old Mole Comes Up For An Early Spring - Loren Goldner

Loren Goldner examines the Wisconsin protests against the background of the capitalist assault against workers since the 1970s.
Image 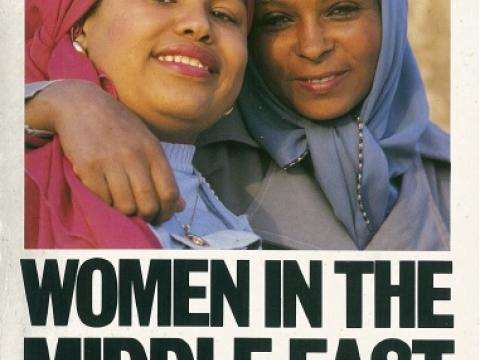 Issue of Khamsin from 1987 about women and feminism in the Middle East and Egypt, Palestine and Israel particular.