The general exhaustion of the capitalist system of production and distribution-after the brief period of reconstruction which followed the previous war-had paralyzed every national economy in the world. Every country had millions of unemployed, still machinery, idle capital and markets in liquidation. The population could not have been left to starve; relief for the unemployed was inadequate for the satisfaction of the most elementary needs. Governments were making debts and mortgaging the future, but unsatisfied needs caused discontentment which, in turn, suggested and inspired theories and movements which, spurred by the ills of the bleak present, called for a future of abundance and well-being for all. Preparations for war and the ruins of war themselves constituted the only road which governments could take-the only one which the ruling classes would permit to be taken in the attempt to get out of the stagnant situation created by an insufficient consumption of products. War preparations and war itself bring work to the workers and bread and butter to their families. And what is more important for the privileged classes, war brings markets for capital, dividends for investors, profits for industry and business and huge cuts for financiers.

In the bankruptcy in which capitalist economy finds itself, war is the only industry really profitable because it is capable of putting labor and capital in motion and of securing a safe market for the unlimited efficiency of modern production. War, therefore, is a matter of life and death also for the capitalist system of economy. People are not going to submit forever to an existence of want and idleness when they can see within their reach an abundance of machinery and raw material more than enough to satisfy their needs. They will realize that it depends only on their will and daring to change their miserable status to one of comfort and abundance. In this respect, war can be considered a substitute for the open and violent repression of social revolution on the part of capitalism and the state. 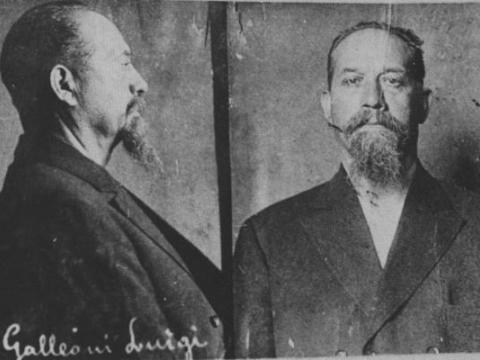 Galleaini, Luigi: a fragment of his life

A biography of part of Luigi Galleani's life.