The Roots of Anti-Semitism

From the Writings of Raya Dunayevskaya: Marxist-Humanist Archives
October 1999

The roots of anti-Semitism
Editor's Note:The recent shooting spree against Jews, Blacks and Asians in Illinois by neo-Nazi activist Benjamin Smith, the burning of two synagogues in northern California by individuals who had passed out flyers supporting Serbia's war against Kosova, and the attack on a Jewish community center in Los Angeles by another neo-Nazi this summer all testify to a terrifying growth of racism and anti-Semitism in U.S. society. As part of our response to this development, we here publish a 1960 article by Raya Dunayevskaya which was written shortly after an outbreak of anti-Jewish violence in Germany and the U.S. It originally appeared in NEWS & LETTERS, February 1960.

This instructor in the ways of democracy had the gall to say that he "didn't know" that playing with Nazi uniforms and insignia would have any worse effect on his son than playing at being cowboy, especially since he had told him that "the enemy now was the hammer and sickle."

The so-called "minister of war" in that American Nazi group is the son of a policeman.

This group of juvenile delinquents-who were not sent to a house of correction, but given back to the custody of their parents-was organized fully four years ago by the older brother of the "fuehrer," who has since become a guardian of democracy where he is stationed-in Germany.

The Army issued a statement that it would "immediately" investigate whether the soldier had any connection with the Cologne outrage. At the same time the press displayed such tender feelings in the whole matter that not only were the names of the teenagers not revealed, but neither were those of the parents or the soldier.

That this contrasts sharply with the practice followed when a Negro moves into a white neighborhood is made the more blatant by the fact that all this has occurred in a neighborhood adjoining the one that two years ago saw adult hooligan attacks on Mrs. Watkins' home. Behind every so-called juvenile delinquent stands a respectable adult with all the prejudices of decadent capitalist society.

ON BOTH SIDES OF THE IRON CURTAIN

Lest we forget that the Allies no sooner won the war than they began to staff their administrations with former Nazis, let me say that the Army would do better than investigate that single Detroit soldier if it looked at its own top brass. I REFER NOT ONLY TO THE AMERICAN ARMY, BUT TO THE FOUR OCCUPYING POWERS, INCLUDING RUSSIA.

WHERE, A DECADE AFTER THE ALLIED VICTORY, "THE LOSER" NAZI GENERAL, SPIEDEL, CAN BECOME THE HEAD OF NATO, ON THE OTHER SIDE OF THE IRON CURTAIN THE JEWS HAVE GONE THROUGH EVERYTHING FROM THE PURGES OF STALIN'S ERA TO THE ERA OF KHRUSHCHEV WHICH PERMITS PUBLICATIONS THAT RIVAL THE FORGED "PROTOCOLS OF ZION."

I refer not only to the American Army, but to the four occupying powers, including Russia.

Where, a decade after the Allied victory, "the loser" Nazi General, Spiedel, can become the head of NATO, on the other side of the Iron Curtain the Jews have gone through everything from the purges of Stalin's era to the era of Khrushchev which permits publications that rival the forged "Protocols of Zion."

(See articles entitled "Behind the Screen of Zionism" in SOVREMENNYI VOSTOK, Nov. and Dec. 1957, and "The Priests of the God Jehovah" in PRIKARPATSKA PRAVDA, Sept. 24, 1958. These are translated, and others of like nature summarized, in the Sept. 14, 1959 issue of THE NEW LEADER.)

The fact that Khrushchev took quick advantage of the present reappearance of anti-Semitism in Adenauer Germany to point to a recurrence of Nazism and ask for "no confidence" in West Germany is pure and cheap politics. Not that Adenauer can be absolved of responsibility, but he is not alone. All the occupying powers in Germany, including Russia, are responsible for the re-establishment of the Krupp empire which nourished and sustained Nazism. And it is now doing its own type of flirtation with Russian orders for "peaceful" goods.

It matters not which of the capitalist powers won, and which lost, the minority problem remains the open sore. This is due not only to the fact that the ruling class needs a "scapegoat" for their crime of never being able to solve a single fundamental problem in war or in peace. Nor is it due only to the fact that the perpetuation of exploitation follows the old maxim of divide and rule. Basic as these two factors are, they are not the whole truth.

UNDER THE OPEN SORE OF THE PERSECUTION OF A MINORITY IS HIDDEN THE GREATER TRUTH OF EXPLOITATION-THAT THE EXPLOITERS, NOT THE EXPLOITED ARE THE MINORITY. WITHIN THIS GREATER TRUTH WILL BE FOUND THE ANSWER AS TO WHY A SPECIFIC SCAPEGOAT IS CHOSEN AT A PARTICULAR TIME AT EACH SEPARATE STAGE OF CAPITALISM'S DEVELOPMENT.

THERE ARE REASONS why the discrimination against a certain race suddenly bursts forth into the lynching of an individual Negro. There are reasons why discrimination against another race takes the form, in late 19th century France, of a single wronged individual as happened in the military conspiracy against Dreyfus, whereas in another country, like Tsarist Russia, it took the form of anti-Jewish pogroms. Whatever the match that started the conflagration, it seemed never to have reached the fantastic proportions of the extermination of a whole race. Yet the barbarous insanity of our times-the extermination of six million Jews in Nazi Germany-provoked no such unanimous outcry of horror as the single Dreyfus case. Why?

The Depression, which sounded the collapse of the economic system of capitalism, brought to the fore the flowering of the new element that came to life when the imperialist tentacles of monopoly capitalism reached for the spoliation of a whole continent with its belief in the "Superior Race."

Those who wish to forget that at the root of present-day apartheid South Africa was the "civilizing mission" of the white race-which meant, in fact, such horrors as the extermination of the Hottentot tribes by the Boers, of Leopold II's reduction of 20 to 40 million peaceful Congolese to eight million-are the ones who took the extermination of the Jews in Germany "in stride"-until the Nazi search for "lebensraum" meant a challenge to their own area of exploitation

AT THE ROOT: CAPITALISM

What the recent anti-Semitic outbreaks show is that it is impossible to destroy Nazism, the most bestial expression of capitalism, where its root, capitalism itself, flourishes. When imperialism first revealed the truth of exploitation-that it is the majority, not the "minority," that is persecuted; when it further took on the additive of color, the "white man's burden" still seemed to be outside of the "civilized, advanced country." But by the time monopoly capitalism was transformed into the totalitarian state form in Germany, it was clear enough that it meant enslavement at home. Simultaneously with the destruction of the Jews went the destruction of the labor movement, reaching its climax in the Nazi concentration camps with their crematoriums.

Lest an Adenauer be permitted to forget his silence at the extermination of a race AT THE TIME IT HAPPENED; lest an Eisenhower forget his impunity which put Nazi officers at head of a rearmed Germany; lest a Khrushchev be permitted to parade as a staunch lover of freedom and peace and protector of Jews, 1 let the historic record show:

WHAT IS THE ANSWER?

Long before the maturing of the state capitalist world in which we now live, Lenin watched the appearance of bureaucracy in the workers' state and warned of "returning backwards to capitalism." His warning-unless production and the state were run by the population "to a man," state capitalism would overtake Russia-fell on as deaf ears as his last fight against Stalin's rudeness toward minority groups.

It remains the most telling commentary not only of present day Russia but of the whole state capitalist world in which we now live.

In contrast to genuine Marxists, liberals have never been able to face the fact of the CLASS NATURE of oppression of minorities, whether that took the individual form of the Dreyfus affair or the outright fascism of our day. When fascism first came to Italy in the 1920s, they said it could never happen in an "advanced" country; the backwardness of Italy was supposed to have produced fascism. When it came to the most technologically advanced European land-Germany-it became a question of "Prussian militarism." When the "non-military" countries by force of arms destroyed Nazi Germany, and neo-Nazism now reappears not only under "democratic" tutelage there, but is spreading to other countries, including America, then we are supposed to blame "juvenile delinquents."

THE TRUTH IS, HOWEVER, THAT THE ONE FEATURE THAT IS TRULY NEW IS THE MASS YOUTH DEMONSTRATIONS AGAINST FASCISM, ESPECIALLY IN WEST GERMANY. THE PREPONDERANCE OF YOUTH IN THESE DEMONSTRATIONS SHOWS HOW DEEPLY-ROOTED IS ANTI-FASCISM AMONG THE YOUTH, ALTHOUGH THEY HAD NOT SUFFERED THE PHYSICAL TORTURES AND CRIMES AND BARBARISM OF THE NAZIS. IT IS THE PRESENT CAPITALIST WORLD WHICH IS CONSTANTLY RE-CREATING THE CONDITIONS FOR FASCISM THAT THEY ARE REBELLING AGAINST.

Far from being rebels without a cause, the youth of today are rejecting this world they never made and searching for new beginnings of a truly human world.

1. The Russian Communist bureaucracy is so unbiased a "protector" of Jews that the GREAT RUSSIAN ENCYCLOPEDIA fails to note the Jewish origin of Karl Marx. At the same time THE HISTORY OF THE COMMUNIST PARTY OF THE SOVIET UNION, which replaces Stalin's Short Course on the same subject in present teachings, shows more liberties with the truth on Jewish Marxists than even Stalin did. For example, it fails to include the Jewish Bund as an organization that prepared the first Congress [of Russian Marxists]. Perhaps Khrushchev considers all this "subtle." It certainly isn't the only untruth, or even a large one, compared to the fact that History has been rewritten.

The Idea of Freedom in Black History 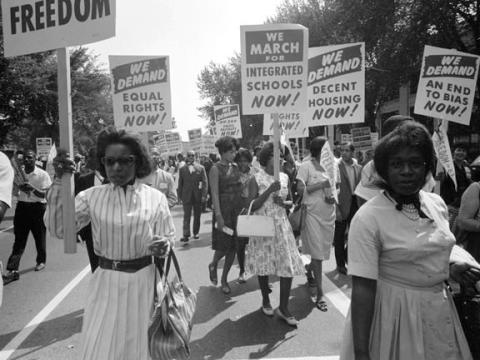 The free speech movement and the negro revolution