The Climate Camp as radical potential

The Camp for Climate Action has the potential, rather than is, a radical space argues a Climate Camp member. Originally published in September 2009.

So it’s three days before the camp and I’m sitting here, debating why I’ve spent the past couple of weeks tatting bits of wood and old carpets, making posters, organising workshops and the hundred of etceteras that come with holding a Climate Camp. What is it I’m (we’re) creating, beyond being one of the most beautiful, heart in mouth and weird events in my calendar? Is, or could the Camp be, a vehicle which offers a potential challenge to capitalism in any meaningful, relevant way?

I’m coming to a conclusion (as you will see) that the sites of the Climate Camp’s ’struggle’ are an abstraction. This is because (as I will argue) the Camp fails to meaningfully engage in relevant conversations and struggles over production.

The main argument I draw from Climate Camp has been ‘we have to take action for ourselves because no one else will.’ But what does that mean - to take action? How is action manifested? Is it just a matter of resisting nodes, old and forthcoming, in capitalist infrastructure like whacking weasels popping out of holes? Or do we need to root our struggle in the power behind capitalism itself: production. Production as in what is produced, by who, for what purpose and, crucially, according to whose decisions?

Climate Camp as an abstraction

What I mean by this is the location of the Camp’s dissent. This year, Climate Camp 2009, came to challenge The City of London itself, a ‘command centre’ of the global economy. The Camp’s aims were to make clear the links between the financial crisis and the ecological crisis. That link, we can assume, is capitalism. The City is a poignant symbol of capitalism and the Climate Camp is a symbolic movement. From pirate boats to colourful marches its defiance is temporary. Its greatest strategic aim must be to engage as many people as possible in resistance in order to halt the cogs of the capitalist carnage that has been developing in the last 500 years or so. However, in the process I feel we need to see that such a strategy will be limited to include those with some independence (economic/social) from the current system and lead to the alienation of others, primarily the working class, who have built up dependence upon this system (and have already offered right wing resistance to our ideals). As well as failing to create productive spaces that resist hierarchical state/corporate control, we are thus essentially enslaving ourselves and each other in the long term.

CO2, 90% cuts, 2030, 2050, etc, etc are all abstract notions that do not take into account people and their dependence, through employment and consumption, to a society geared to produce capital. Yes, let’s imagine a new world! A revolution without imagination is dead, yet one with only imagination is hungry. This is a call to the Climate Camp to decide whether to identify itself as a revolutionary movement and, if so, to have a meaningful discussion about production.

By avoiding struggles over production and turning to The City in order to highlight the links between the economic crisis and the climate crisis perhaps we could argue the camp becomes no more than a spectacular event similar to the launching of Inconvenient Truth or Age of Stupid. That is, it is an engaging and educating spectacle that tells us the dark clouds of climate change are fed by capitalism and are looming, mainly in the global south, and we ’simply have to do something!’

A quick note about the COPs: There are other things to do than fight COPs. Yes, like the summit hopping movements prior to it, we should be delegitimising these decisions. But let’s not forget that scientists, NGOs and a whole host of other etceteras will do that job also once the deal doesn’t show any significant progress. What else we can achieve by going there for a riot, besides having a good time, will be minimal. And at the same time if we are not careful we also run the risk of delegitimising ourselves. So far there has been no conversations to turn Copenhagen over, occupy it and reclaim it for an eco village utopia. But if these are logical conclusions we would like then we should be unifying with struggles over production in our own localities.

Is it behind the sofa? Is production the key we’ve lost?

There is evidence, during this recession and the large scale retrenchments of jobs in the UK and internationally, that occupations are on the table as a form of resistance and even getting the goods. There are struggles taking place where workers and supporters are rising up for their livelihoods in the face of capitalism, working as always for the growth and protection of profit margins.

One of the interesting points during the Vestas occupation was its facilitation by the Rail Maritime & Transport union. The RMT were playing for a ‘dignified defeat’ all along. Although we have to consider that the occupation consisted of 9 out of the 600 or so workforce there was no strong support, in words or actions, to resist the workers’ removal. Little or no voices discussing how workers could be reinstated and the factory adapted to cooperative production of wind turbines. Such agitation and solidarity is a meaningful area that the Climate Camp could invest time into supporting and energising. It demands developing a discourse around the importance of production within the camp and fierce active solidarity at the sites of these campaigns when the time arises. The present model for the Climate Camp (having single moments where alternative public utopias rise from the ground, soon disappearing) is highly resource intensive demanding the continuous work of many people restricting their ability to connect with, as it is, quick to spark labour struggles highly relevant to ecological progress. Again, a discourse needs to be developed so that we are receptive and listening out for signs of these struggles.

Occupations occurring in the global retrenchment of jobs have been calling for negations with bosses primarily over redundancy pay. For us to engage with this energy I believe we need to develop a movement that can take these actions further, and challenge the hierarchy of production and the product itself.

Fossil fuel that powers the machines and fertilises our crops allows capitalism to maintain growth. As fuels with worthwhile extraction value peak and decline, the first to suffer will, of course, be those dependent on and at the bottom of the capitalist system. Energy as a site for struggle will intensify over the coming years and must do sooner rather than later if we wish to have some alternative to total eco nightmare and, lest we forget, some control over how energy is produced to fulfill each others needs (i.e. will it be cooperative or ladled out with a truncheon?).

When failing to engage with occupations and other industrial/productive resistance for livelihoods and dignity (and whatever is left of community) we are failing to put in our word about political hierarchy as an inherent problem and about ecology relationships with industry.

“People are inherently cautious and take extraordinary action only when they have little to lose and something to gain.” (Immanuel Ness) If this is true then the predominantly middle classes that understand climate change as a threat see the need for action, yet working classes whose lives are less historically stable still feel a lot to lose through both reactions to climate change (from a social movement or the state) and the current recession.

However those out of the wash of the current economic system, though still dependent on state welfare (that cushion of general revolt), enter a potential class of people who are susceptible to new ideas and action. If again we are interested then we should not allow this potentially radical force to be absorbed and utilised by the far right.

This essay goes little way in addressing all the issues a discourse like the one I am calling for in the Climate Camp should consider. For example, if and how we would select sites of production for solidarity based on their environmental impact, how we relate to global struggles and even what we mean by production within a climate change (post industrialist?) concerned vision. Yet this is a plea, mainly for clarity of who we are.

The Climate Camp, like the process of writing this article for me, is a process of continual learning and discovery for ourselves. I came to the Camp, for example, deeply worried about climate change with little knowledge of definitions for capitalism, state, anarchy and class, arriving with the firm intention of cutting CO2 emissions and a vague idea (and love of) moving closer to nature. I’m still driven by these factors but I know for myself and now argue that CO2 has for this movement become an abstraction, and perhaps even a distraction, from the necessary challenge we meet in the struggle against capitalism for ecological and egalitarian values.

I feel that Climate Camp has a lot to give to struggles over class and production (this was demonstrated in part in and around the roundabout camp outside Vestas) and yet these movements have something to teach the Camp - that without locating our struggles in production we are dealing with the abstract and are disempowering ourselves and the millions who have a dependent relationship upon a capitalist engine, running out of petrol, and waiting for someone to make a sharp turn.

The author is a young activist presently living in London. His blog tendercalves.wordpress.com is a work in progress.1

Climate Camp and Us - Anarchist Federation

A perspective paper produced by members of the Anarchist Federation within climate camp 2009. Originally published in September 2009.
Image 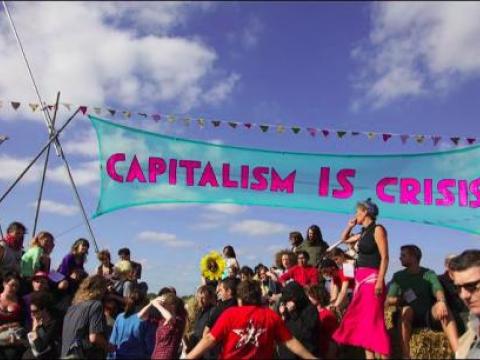 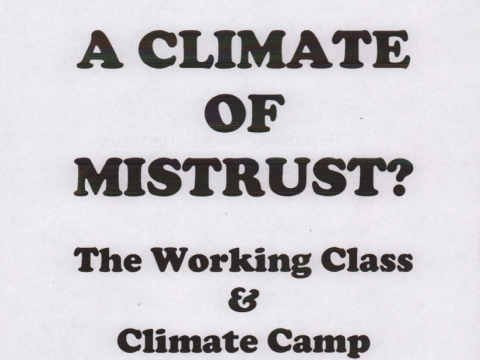 A Climate of Mistrust? The Working Class and Climate Camp