Critiques and caricatures: a response to undercurrent

Critiques of the June 18th action, its aims, organisation and general relevance, are important and to be welcomed. Theory, critical or otherwise, is too often rejected in favour of action when we need to combine theory and action, fostering, articulating and inhabiting the tension between them. Lest this response be taken as saying all is fine with the aims and focus of the action let me emphasise it isn't.

There are fault lines running through it - many of which the critique from undercurrent identifies. If the critique helps to bring out and transcend the problems and contradictions of the June 18th action then it will have been worthwhile but if it elevates one position while parodying all others then it amounts to little more then theoretical point scoring

The lack of theoretical flesh on the bones of the June 18th action has been pointed out by the Sussex university zine undercurrent. In an article entitled "The longer the list, the better the action" they argue that, on the strength of the first few propaganda leaflets, the organisers of June 18th are more interested in numbers then analysis; in how many groups they can get involved then in the commonality between them; and that this in turn leads to lowest common denominator theory and a spectacular practice. Such criticisms are well-placed and ultimately helpful, food for thought for those involved, but the article repeatedly falls more into caricature then critique - tending, in turn, to critique its own caricature rather than what the leaflets said or what might actually be happening.

The quote the article takes for its title - "the longer the list, the better the action," is part of a sentence from a leaflet encouraging involvement in the June 18th action. True enough, it' s not true - a list that included the likes of, to use their example, the French Front National, would make for a longer list but a scarily incoherent action. To use this snippet though, as the writer does, to confirm the "campaigns"

"essence" as "indifference towards the social content of movements" and to suggest that June 18th is all about masses and quantities is indicative of the writers disingenuous selective reading. The first part of the sentence reads: "We will only realise our collective visions by taking action together" then lists some

likely suspect sectors - unwaged, students, workers, etc, before finishing "the longer...". You could be forgiven for assuming this meant that the listees should share some collective content but, fair enough, the 'visions' referred to could do with some focus.

From this unpromising start the article goes on to contend that "the campaign" posits a incoherent, vague, them and us logic; has dispensed with any critique of capital and critical analysis generally; is fixated on financial institutions and multinationals; has a positivistic and moralistic approach; all amounting to confusion and mere pseudo-practise. Such insight after reading a "few propaganda leaflets" is surely commendable but leaves little room to practise what you preach and do more than scratch the surface of a subject.

To expect critical analysis from an A5 leaflet is possibly asking too much. While to conclude the rejection of radical critique (read as our radical critique) from such a leaflet is going too far. Tell the many people on the J18 email discussion list - an international forum for interested groups and individuals set up at the start - that, "further reflection has been dispensed with." They have been analysing and reflecting on capital, state, resistance and the like, for some time now. There are also groups around the UK organising meetings to discuss the plan where no doubt, some reflection may slip in occasionally. Then there is the London networks 'What is Capitalism?' conference - organised precisely for "further reflection." The writer of the article may not have known all this but then if "the essence" of "the

campaign" has already been revealed there is no need to find out.

In fact the lack of a critical analysis of capitalism in the direct action movement and its almost complete mystification in social life generally, is part of the point of organising the action. If a "recognition that the global capitalist system is at the root of our social and ecological troubles" was "commonplace" we might be in more encouraging times. The commonplace, in this instance, is for most people an obscurity.

Juxtapositions for the sake of a propaganda leaflet such as, "We are more possible then they can powerfully imagine" are hardly to be taken as conclusive evidence of something's "logic" or "essence". Propaganda - at least that which aims to get people active - often involves simplifications of a subject. By

definition it aims to persuade or convince people and, yes, those working on J18 would like people to get involved and may initially be less concerned to ask to see the groups' theoretical credentials; or to check whether or not they are "complicit with capital". Furthermore the assumptions made in the text that our/their collective resistance is basically "raving for a few hours" or "throw(ing) some custard pies" might ring hollow for participants in 'the south' where doing either is not exactly top of the agenda.

Far from positing a crude them and us the claim is that our problems are systemic, inherent within the socio-economic order. Interpretations as to the fundamentals of this order may differ, as may the methods for its disposal, but the need to act collectively is clear. Who knows, action may even affect their/our interpretations. Maybe even, a way into an understanding of capitalism is through the

'globalisation' debate that the article sneers at.. To denounce those who haven't reached your understanding yet is akin to the vegans who attack potential vegetarians for not going far enough thus sending them straight back to the meat counter.

That there are, within the June 18th network, conflicting views, simplifications, confusions and hopes of getting a diversity of groups involved, is undeniable. Such are the concerns of practise. The luxury of everyone acceding to your understanding or agreeing with your ideas and practices is often unavailable in small unified groups let alone large diverse movements. This is, of course, where analysis, argument, dialogue and discussion comes in.

The heart of the global capitalist economy

If June 18th is just a few leaflets, then a few thousand people occupying the City for a day then it might well be exhilarating - reason enough maybe - but it won't add up to abolishing capitalism. That will require a more consistent praxis. Then again, to be so sure of where a "weaving together of all the single issue movements" leads, that it is "simply an incoherent patchwork ", is to forget that the outcomes that result from a practise are not always the ones intended. That the secondary effects may be wholly unexpected. This of course cuts both ways and is no reason to dispense with analysis or intention but just maybe, looking for the potential and possibilities of a situation is as useful as dismissing it in advance.

The coinciding of J18 with the G8 summit is not to put pressure on bad corporations via nation-states but to show the collusion between state and capital and the necessity to overthrow both; to contend that exploitation is also a political matter not just an economic one. That this is not bluntly said - and arguably it should be - owes more to a desire to open a debate before concluding it, and to the perceived role of a propaganda leaflet, then any rejection of critical analysis. Starting from a recognition of the multiplicity of positions and interests - irreducible to a single analysis - and tentatively endorsing this divergence, the unity is then aimed at precisely the recognition of exploitation by capital from different but complementary experiences. It doesn't presuppose that unity but attempts to open a space for critique that is available to all.

To claim, as the writer does, that "if there is such a thing as "the heart of the global economy"" it "would rather make sense to occupy some factories" - makes no sense at all. Besides the literalism of its interpretation of a slogan, the autonomist insight that all of social life under capitalism tends to become a factory for the exploitation of surplus value - not only wage-labour but the free work of students and housewives etc - means that June 18th is an occupation of "some factories": the social factories of the city streets and squares.

And while June 18th may well be "in many regards similar" to the campaign against the MAI (Multilateral Agreement on Investments) - although the similarities are unspecified - there is at least one huge difference. The campaign against the MAI was mainly a lobbyist, letter writing opposition to one re-regulatory element of capital, the June 18th co-ordination is rooted in a direct actionist opposition to capitalism, full stop.

A call for mass action might indeed "amount to confusion", if that was what was being called for. It isn't. On the contrary, autonomous actions - co-ordinated and focused - are being called for. Hopefully by those who have thought about what they are doing and why. One of the main organising principles of J18 is autonomy for the groups and movements involved. Meaning in practise encouraging self-activity and being less quick to dismiss other approaches. Not to build "a mass" but to make connections, encourage debate, open dialogues. Whether such confusing activity is leading "ultimately (to) mere pseudo-practise" is to be decided by those who know the true practise presumably - we await their instructions...

The article ends with a summation of "the campaigns" strategy as naÃ¯ve, using a slogan from the leaflet as illustration, but while "imagine taking your desires for reality" is on the leaflet it is hardly "depicted as the ultimate response to global capitalism" . The June 18th action may well be naÃ¯ve but it is not just a "strategy of immediacy" by "hippy-individuals" against the evil "them". That this is just clear-cut misrepresentation is self-evident. There are other "slogans" on the leaflet, which the writer does not mention, such as "imagine a society based on mutual aid, sharing and respect for nature" and "imagine a world where people have control of their lives and communities". A less condemnatory reading may have suggested that those involved do feel creating a different world will require thought, collective action and an ongoing process and have presented some constructive ideas to pepper the criticisms.

If the June 18th action is not the activity of a "significant movement that at least claims to be revolutionary" it is at least significant for revolutionaries; and if its participants, like the theorists at undercurrent, are "remote from advancing a coherent line of argumentation" they are, at least, advancing arguments. As an attempt to put capitalism back on the agenda of resistance at a time when its logic is further cloaked in mystification; as a contribution to the rebuilding of international solidarity at a time of rekindled nationalism and as a forwarding of informed imagination at a time when radical visions are seen as withering away, the June 18th action deserves, not caricatures, but the sharpest of critical engagements. 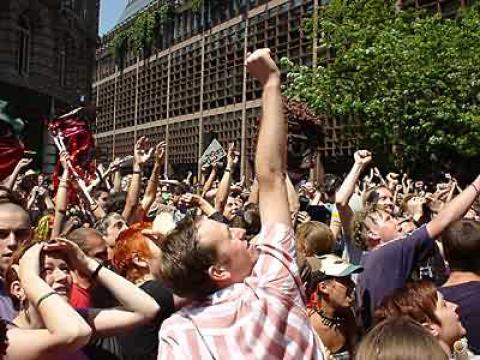