This has been a year of occupation at universities around the country, kicking off a tide bound to continue, and mocking the idea that students as a group have become impotent and apathetic. Whilst the ransacking of student pockets certainly serves to focus many students even more determinedly on their future careers and CVs, debts and salaries, it is a kick in the teeth for other students less proccupied with the future, and more concerned with the present in which the chances of higher education for certain sectors of the population, or for any reason other than raising job prospects, are becoming ever more remote.

This academic year students, who at first seemed docile beyond the wildest dreams of the government, acted and occupied, having finally noticed that protesting to the government about fees and no grants is simply pissing in the wind, though useful experience and a pseudo-activism for those pursuing a prestigious career in politics. Occupiers at Sussex and other universities dispensed with attempts to gather support from professional politicians and instead took action in their own right; there were long-running occupations in London, at Goldsmiths and at UCL over tuition fees and the abolition of the grant, and also at UEL (University of East London) over the cutting of courses, staff sackings and the reduction of computing facilities. The Camberwell Art College occupation in March was over shoddy equipment, under-staffing and accomodation, and over library access at the SOAS library occupation earlier in the year. Occupying has become ever easier, ever more obvious, and is quickly becoming the only possible course of action.

Within the Sussex occupation[1], the absence of leadership, the refusal to package the action neatly into media-sized portions, the indifference with which the vice-chancellor's attempts to speak to the occupiers (scratching at the windows at all hours - do try to get some sleep, Alistair!); all these underlined the fact that this was no stunt aimed merely at getting attention from newspaper-readers over their cornflakes, but instead a genuine event occurring inside Sussex House and not in the communications ether. Negotiate with the V.C.? Our only negotiation was our physical and intransigent presence at the nerve centre of his business; nothing to discuss when our demands were on his table (no expulsions, no repercussions). That students have absolutely nothing to discuss with university management was well illustrated at the chaotic open meeting after the occupation, where Smith tried to present his trusty I'm-a-reasonable-man credentials, but barely kept his cool under the onslaught of questions/comments/accusations, and whose personal opinions about fees were displayed as just that - the personal opinions of a bureaucrat with only the power to carry out orders. Universities have been handed the dirty job of collecting fees, losing £1000 from Local Education Authority income for every £1000 due from a student. It is the universities who are left short when students refuse to pay, and it is in the universities and not in Parliament that the battle is therefore being fought.

The laughably compromised NUS can have no moral right to represent students: the real possibility of the scrapping of fees in Scotland recently was deftly deflected on a nod and a wink from the NUS. It was they who suggested a 'review' on fees to let the LibDems off their promise to scrap fees; they leapt decisively to the defence of the Labour government when it was threatened with the embarassing and damaging prospect of no fees in Scotland. Under the control of Andrew Pakes, New Labour lover, and his obedient majority of cronies on NUS Executive, the NUS is barely worthy of a moments' thought to determined student activists. It was, therefore, very kind of a group of students to have paid the NUS headquarters a visit on the 8th of June...

On the occasion of an NUS NEC[2] meeting, a band of about 15 students stormed through the doors of the NUS headquarters in Holloway Road, London, suddenly bored of ignoring this New Labour-dominated organisation solidly following its orders with such seeming impunity. At the annual conference in March, despite the usual challenge to the leadership by left-wingers, the vile Andrew Pakes was slipped back into position as President for another year, despite his own admittal of his intention to ensure the 'smooth implementation' of fees. Not hoping to persuade the NUS exec. to suddenly meaningfully represent student interests, nor with any expectation that they might see the light, but with the simple wish to give them a right good slapping and a bit of real confrontation, unmediated by a conference hall and a compliant chairperson, students paid them a visit.

The familiar cry - 'Get the doors shut!' - went up from Pakes' sidekick as he spotted the laughing invaders, but it was already too late. They were in and up the stairs to the executive offices like a shot, with the Labour elements of the executive right behind them. Occupiers were joined in their office by sympathetic members of exec. while fuming Pakesites attempted to block doorways. Andrew Pakes gave a marvellous impression of a brainwashed drone by repeating an accusation, like a broken record, of harrassment, victimisation and intimidation of 'his' staff. Although this was a lie and denied, and he was told not to worry his head about a matter that was already being dealt with between occupiers and staff members and union, he was unable to say anything else for the four hours the occupation continued.

For the forthcoming academic year, plans are rolling into place for mass non-payment of fees. Thousands of non-payers are set to put the government in an impossible position - to de-register them all would only create a mass movement of disenfranchised, radicalized students with way too much time on their hands. There exists the possibility of the defeat of fees despite the impotence of officially sanctioned channels of representation and protest, and for the setting of yet another precedent for autonomous non-compliance and resistance, not to mention the politicization of a generation of students.

But the abolition of the student grant threatens to leave the government and the NUS sniggering into their sleeves at easily-distracted student activists. Throughout all the debate and polemic about fees, the issue of the grant has been trying to stay in the game, resurfacing every so often with an 'of course, the real issue is the abolition of the grant'. In practical terms, for students with no outside financial support[3], of course it is. Current third-year students with grants receive £1800 a year, enough to cover much of their rent at least, though they will still usually need to take out loans as well. But the prospect, this forthcoming year, of £4000 a year loans with no grant is one which very effectively excludes many thousands of prospective students, from those with children to those over 55 (no loans available) to those who simply have no intention of enslaving themselves to a large debt for the foreseeable future. We will have failed, despite victory over fees, if we do not take decisive and focused action against the scrapping of the grant. The increase of many students' loans and debts to £12,000 and more forces students to purchase for themselves a meaningless future as indentured slaves, forever owing the company store.

[1] The Goldsmiths occupation was initiated at a quorate UGM and Student Union-led, which carried over into the occupation where meetingswere run along the lines of UGMs with proposers of motions etc. and routine voting. The Sussex occupation, in contrast, ran on the basis of consensus as far as possible, with voting reserved as the last resort for particularly contentious issues, and no leaders or even spokespersons.

3 These students do not pay fees - they are means-tested with payments of up to £1000 starting at a parental income of £26,000. Most £1000 tuition fees were paid up promptly this year by students with cheques from their parents. 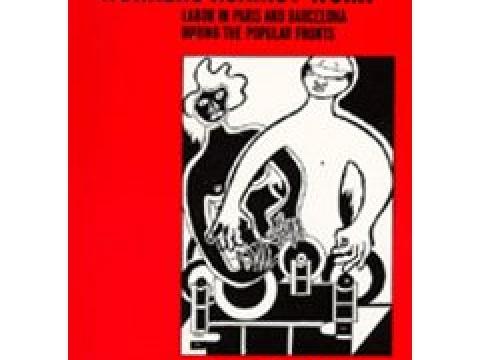 Undercurrent's review of Michael Seidman's 'Workers against work: labor in Paris and Barcelona during the Popular Fronts'.
Image 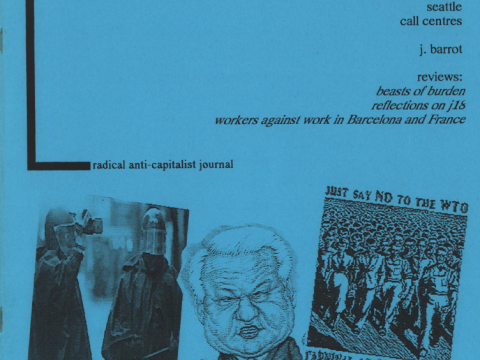