The end justifies the means. This saying has been much abused; yet it is in fact the universal guide to conduct. It would, however, be better to say: every end needs its means. Since morality must be sought in the aims, the means is determined.

Once the goal one is aiming at has been established, consciously or through necessity, the big problem of life is to find the means which, in the circumstances, leads to that end most surely and economically. In the way this problem is solved will depend, so far as it can depend on human will, whether the individual (or party) reaches or fails to achieve his ends, whether he is useful to his cause or unwittingly serves that of the enemy. To have found the right means, herein lies the whole secret of great men and parties that have left their mark on history.

For mystics, the aim of the Jesuits is the glory of God; for others it is the power of the Company of Jesus. They must therefore make every effort to brutalise, terrorise and subject the masses.

The aim of the Jacobins, and all authoritarian parties who believe themselves to be in possession of absolute truth, is to impose their ideas on the ignorant masses. They must therefore make every effort to seize power, subject the masses, and fit humanity to the Procrustian bed of their concepts.

The problem for us is a different one; because our aims are so different, so also must be our means.

We do not carry on our struggle in order to put ourselves in the place of the exploiters and oppressors of today, no do we even struggle for the triumph of an empty abstraction. We have nothing in common with that Italian patriot who declared: "What does it matter if all Italians die of hunger so long as Italy is great and glorious! "; nor even with that comrade who confessed to being indifferent to whether three quarters of humanity perished in making the world free and happy...

In our opinion all action which is directed towards the destruction of economic and political oppression; which serves to raise the moral and intellectual level of the people; which gives them an awareness of their individual rights and their power, and persuades them themselves to act on their own behalf; [in a word] all activity that encourages a hatred of oppression and awakens love among Man. brings us closer to our ends and therefore is a good thing (subject only to a quantitative consideration: of obtaining the best results from the available forces at our disposal). On the other hand, all activity that tends to preserve the present state of affairs, that tends to sacrifice man against his will for the triumph of a principle, is bad because it is a denial of our ends. We seek the triumph of freedom and of love.

Should we, for this reason, renounce the use of violent means? Not at all. Our means are those that circumstances allow and impose.

Of course we do not wish to lay a finger on anyone; we would wish to dry all the tears of humanity and not be responsible for more tears. But we must either struggle in the world as it is or remain helpless dreamers. The day will come, we are convinced of this, when it will be possible to serve the cause of Mankind without hurting either oneself or others; but today this is not possible. Even the purest and gentlest of martyrs, those who would allow themselves to be dragged to the gallows for the triumph of good, without resisting, blessing their persecutors, as did the Christ of the legend, would be doing harm. Besides the harm to their own persons, which after all must be reckoned with too, they would cause bitter tears to be shed by all those who loved them. In all actions in life it is, therefore always a question of seeking to cause the least harm to achieve the greatest possible good...

Obviously the revolution will be the cause of many tragedies and much suffering; but even if it produced a hundred times more, it would always be a blessing compared with the sufferings which now exist in the world as a result of the evil organisation of society. (I'En Dehors, August 17. 1892)

There are, and there always have been in all socio-political struggles, two kinds of hypnotisers.

There are those who consider that we are never mature enough, that we expect too much, that we must wait, and be satisfied to advance a little at a time with the aid of small reformsÃ‰ which are periodically won and lost without ever solving anything. And there are those who affect contempt for the small things, and advocate all or nothing, and in putting forward schemes, probably excellent ones which cannot however be realised through lack of sufficient support, prevent, or seek to prevent, others from doing the little that can be done.

For us what is most important is not what we achieve... but how we achieve it.

If in order to secure an improvement in the situation one abandons one's basic programme and stops propagating it or struggling to realise it; if one induces the masses to pin their hopes on laws and the good-will of the rulers rather than in their own direct action; if one suffocates the revolutionary spirit, and ceases to foment discontent and resistance-then every advantage will prove illusory and ephemeral, and in all cases will bar the roads to the future society.

But if instead, one does not forget one's final objectives, and encourages the popular forces, as well as inciting to direct action and insurrection, very little may be achieved at the time, but one has made a step forward in the moral preparation of the mass of the people, and in the achievement of a more favourable social climate.

"The optimum is enemy of the good" says the proverb: let us do what we can, assuming we cannot do all we would wish; but do something we must. (UmanitÃ Nova, June 25. 1922)

Another damaging argument sincerely advanced by many, but which for others is an excuse for doing nothing, is that the present social environment does not make morality possible; and that consequently it is useless to make efforts which cannot succeed, and it is therefore best to get all one can for oneself without bothering about others, except to change one's way of life when the social organisation will be changed. Obviously all anarchists and socialists understand the economic facts of life which today oblige man to struggle against man, and any observer will see the importance of a personal struggle against the overwhelming power of the present social environment. But it is also obvious that without revolt by the individual, who joins with others of like mind to offer resistance to the environment in order to change it, it will never change.

All of us, without exception, are obliged to live, more or less, in contradiction with our ideals; but we are anarchists and socialists because, and in so far as, we suffer by this contradiction, and seek to make it as small as possible. In the event of adapting ourselves to the environment, we would of course also lose the desire to change it, and would become ordinary bourgeois; bourgeois without money perhaps, but for all that bourgeois in our actions and intentions.' (l'Anarchia, August. 1896) 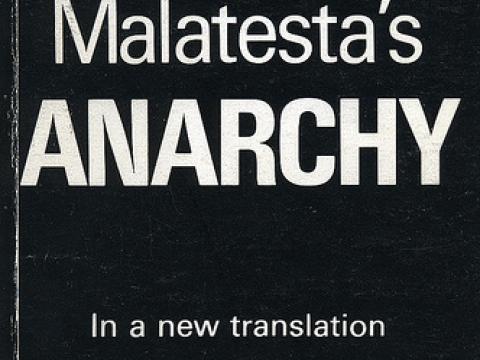 Malatesta's best known work, a pamphlet on what anarchism means.

The Labour Movement and Anarchism 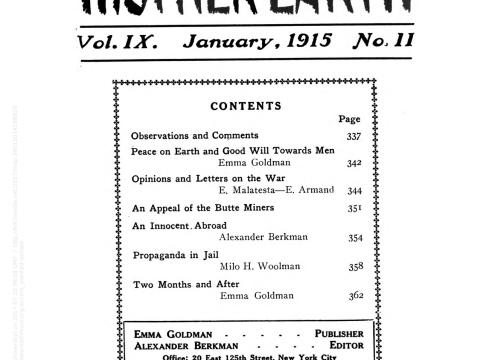