The Ethics of Egoism

EMILE ARMAND, IN HIS YOUTH, joined the Salvation Army. Then he studied Tolstoy and became a Christian anarchist. Finally, still in his youth, he became an anarchist individualist, and so remained until he died, at the age of 90. I am told by one learned in such matters, a Freudian could deduce, from the above facts alone, that Emile Armand had a strong father fixation. This gives me the confidence to voice a speculation of my own, formulated while I was reading a new pamphlet of translations from his work.*

I reckon he shared, with many saints of several religions, a profound longing to define what was admirable in human behaviour, and make this the pattern of his own behaviour. The strict moral code was what attracted him to the Sally Bash. He resigned to become a Christian anarchist when Tolstoy showed him how quasi-military ritual actually hindered strict ethical behaviour. And finally, when the study of Stirner and Nietzche showed him that external moral forces also hindered personal responsibility, he gave up Christianity itself.

The essays in Sid Parker's pamphlet are translated by three different writers and taken from two different periodicals. But all of them are on the subject of ethics. (The essay from Resistance, titled 'The Future Society' is about 'the future humanity that individualists want'.) Instead of a mere memorial to a prolific anarchist writer, Parker has assembled a coherent and timely work on anarchism as a way of life.

Armand was a thorough-going anarchist; an honest believer in individual aspiration as the source of social harmony; one of those referred to by Bob Green in ANARCHY 16 as, 'the egotistic (sic) anarchists whose declared over-riding concern is with Number One'. His 'individualism' was synonymous with Stirner's 'conscious egoism', and the 'egoism in sense 2' which the Shorter Oxford Dictionary defines as; 'Ethics. The theory which regards self-interest as the foundation of morality. Also, in practical sense; regard to one's own interest, systematic selfishness.'

'Our kind of individualist', he wrote, 'recognizes as a motive nothing outside himself.' Presumably he preferred the word 'individualism' because 'egoism' is so easily confused with 'egoism in senses 1, 3 and 4' (to say nothing of 'egotism'), besides being open to deliberate misrepresentation.

There would appear to be a section of self styled anarchists who have taken over from the authoritarian socialists, who in turn adopted it from the Christians, the equation of selfishness with cynical sensuality. These are the woolly-minded anarchists who think the egoist doesn't give a damn for anyone else. They might be surprised to find Armand. who openly 'recognizes as a motive nothing outside himself', boasting that 'our conception of comradeship raises itself like a lighthouse to remind the world that there are still persons capable of resisting the seductions and gross appetites of our philistine society'. Yet he shows quite clearly how self-interest leads to propaganda and the practice of mutual aid:

'Tending to live his own individual life at the risk of clashing intellectually, morally and economically with his environment, the anarchist individualist tries to create in the same environment, by means of selection, individuals who like himself are free from the prejudices and superstitions of authority, in order that the greatest possible number of men may actually live their own lives, uniting through personal affinities to practise their conceptions as far as possible. As individuals of his own "species" increase, so the power of environment over his own life diminishes'.

That 'the egoist is more willing and eager than the humanist to give free reign to his aggressive impulses' is clearly shown to be a misunderstanding; and the question of how Armand's anarchist would choose 'given a clear choice between personal happiness and the happiness of others' is one which cannot arise. Were any man so 'niggardly of heart', so lacking in common sympathy as to be aware of such a choice, 'he would feel himself incomplete', and could not be an egoist. For the egoist must feel self-sufficient.

'This explains his plan for freeing his world of useless and avoidable suffering. He knows that this is possible when one prefers agreement to struggle, abstention to the unlatching of actions dictated by bitterness, animosity or spite.'

Armand admits the existence of 'armchair Nietzcheans or weekend Stirnerites' whose conception of egoism does not include a strict code of personal integrity, but he rejects them:

'The individualist as we know him abominates brutes, cretins, schemers, rogues, twisters, skunks and so forth, no matter with what ideology they wish to conceal themselves.'

The integrity he wants, however, is strictly a matter of self-interest, quite different from submission to collective morality.

'The anarchist regulates his life not according to the law, like the legalists, nor according to a given collective mystique like the religious, the nationalists or the socialists, but according to his own needs and personal aspirations. He is ready to make the concessions necessary to live with his comrades or his friends, but without making an obsession of these concessions …

'Instead of postponing individual happiness to the socialist or communist calends, he extols his present achievement of it by proclaiming the joy of living …

The anarchists go forward, and by living for themselves, these egoists, they dig the furrow, they open the breach through which will pass the unique ones who will succeed them.' 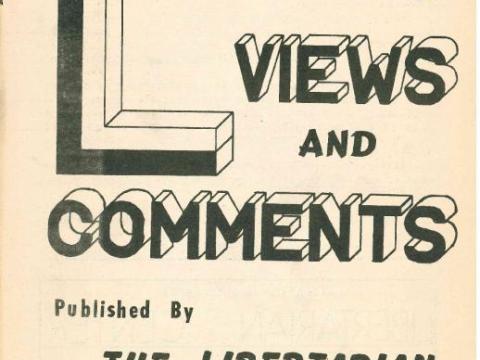 The No. 25 (December 1957) issue of Views and Comments, an anarcho-syndicalist leaning publication produced out of New York by the Libertarian…

Stirner: the ego and his own - Max Baginski

Article originally published in Mother Earth magazine in May 1907, drawing anarchist communist conclusions from Max Stirner's classic individualist text, The ego and its own. 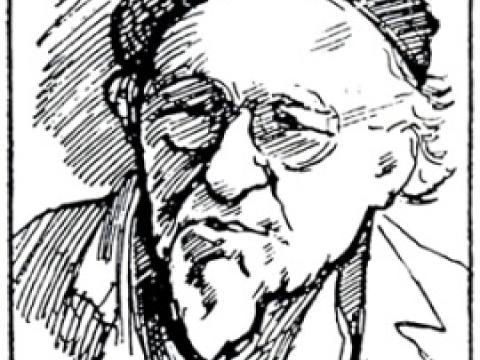