Sylvia Pankhurst outlines how socialism and communism will only come from a total break with capitalism.

The words Socialism and Communism have the same meaning. They indicate a condition of society in which the wealth of the community: the land and the means of production, distribution and transport are held in common, production being for use and not for profit.

Socialism being an ideal towards which we are working, it is natural that there should be some differences of opinion in that future society. Since we are living under Capitalism it is natural that many people's ideas of Socialism should be coloured by their experiences of life under the present system. We must not be surprised that some who recognise the present system is bad should yet lack the imagination to realise the possibility of abolishing all the institutions of Capitalist society. Nevertheless there can be no real advantage in setting up a half-way-house to socialism. A combination of Socialism and Capitalism would produce all sorts of injustice, difficulty and waste. Those who happen to suffer under the anomalies would continually struggle for a return to the old system.

Full and complete Socialism entails the total abolition of money, buying and selling, and the wages system.

It means the community must set itself the task of providing rather more than the people can use of all the things that the people need and desire, and of supplying these when and as the people require them.

Any system by which the buying and selling system is retained means the employment of vast sections of the population in unproductive work. It leaves the productive work to be done by one portion of the people whilst the other portion is spending its energies in keeping shop, banking, making advertisements and all the various developments of commerce which, in fact, employ more than two-thirds of the people today.

Given the money system, the wage system is inevitable. If things needed and desired are obtainable only by payment those who do the work must be paid in order that they may obtain the means of life. The wages system entails such institutions as the old-age pension, sick and unemployment insurance and widow's pensions, or the Poor Law, and probably plus the Poor Law. These involve large numbers of people drawn from productive work to do purely administrative work. Thus useless toil is manufactured, and the burden of non-producers maintained by the productive workers is increased.

Moreover social conditions are preserved which are quite out of harmony with Communist fraternity. The wage system makes the worker's life precarious. The payment of wages entails the power to dismiss the worker by an official or officials.

So long as the money system remains, each productive enterprise must be run on a paying basis. Therefore it will tend to aim at employing as few workers as possible, in order to spend less on wages. It will also tend to dismiss the less efficient worker who, becoming unemployed, becomes less efficient. Thus an unemployable class tends to grow up.

Buying and selling by the Government opens the door to official corruption. To check that, high salaried positions are created in order that those occupying them have too much to lose to make pilfering and jobbery worth while.

Originally published in One Big Union Bulletin, 2 August 1923. Taken from the SPGB website.

The eighth issue of Solidarity for workers' power with articles on the opposition to nuclear arms, reprinted advice from Sylvia Pankhurst and book reviews.
Image 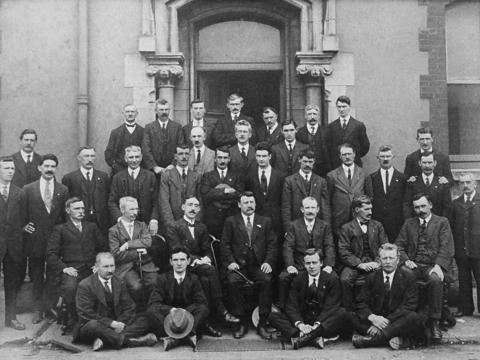 Article on the necessity of free, open discussion within the CPGB, and the need for Workers' Dreadnought to remain independent of the party Executive.