Based on a paper by Prof. Peter Rachleff, Macalester College

Although you may not have heard about them, general strikes have played an important role in American labor history. They have carved out key turning points, marking the emergence of a new kind of organization, a breakthrough in contesting political power, a new level of class consciousness, setting a tone for years of struggle to come. Legal or not, sanctioned or not, praised or demonized by the media, dramatized or ignored by history books, these strikes have been central to our history.

What are general strikes? A general strike has usually involved workers from a broad range of occupations and industries, though with some geographic focus, such as a city or a state. While unionized workers have typically been at the core of general strikes, non-union workers, families, neighbors, students, and the unemployed have often joined in. These strikes have often started with economic demands, but they tend to move quickly to issues of procedure, rights, and justice. They might have begun as a solidarity/support action on behalf of a particular group of workers, but, in response to the behaviors of the authorities (repression by the police or militia, the recruitment of strikebreakers by employers, public disrespect by government officials), other unions, workers, and community organizations have extended the issues and demands of the strike to their own situations. That is, these strikes are about solidarity and self-expression at the same time. Above all, they are about power.

A general strike has usually included enough participants to shut down most production, transportation, and even government functions. Once they have shut down most business, general strikes have put workers and their organizations in the position of having to decide how to “manage” society – which services should continue, how their delivery should be structured, who should receive these services, etc. This “management” has necessitated the creation of new kinds of labor organizations, linking the economic and the political, creating a more direct voice than usual for rank-and-file members, as well as a voice for service recipients, consumers, and citizens. In short, general strikes are not only expressions of class power, but they can call into existence new vehicles of class power.

What circumstances have set the stage for general strikes? Periods of economic difficulty have often provided the context for general strikes. Employers push wage cuts onto one group of workers, with intentions to generalize them to the next, and the next. The situation embodies that old maxim, tweaked by Anne Feeney: “United we bargain, divided we beg.” At key points, employers might challenge the very existence of workers’ organizations, determined to have the power to unilaterally impose new wage levels, work rules, job descriptions, even a new organization of work.

When employers have found workers mobilizing resistance, they have turned to the government for assistance – the enforcement of laws which restrict picketing, an increased police presence to protect strikebreakers, the criminalization of protest, and the outright repression of labor organizations. In these situations, workers talk more and more in terms of their “rights” and they raise questions about “democracy” and “justice.” Such circumstances have given birth to general strikes.

What have been the outcomes of general strikes? Few general strikes have succeeded in winning all of their articulated demands. Through these struggles, a wage cut has been restored, union recognition and collective bargaining have been won or preserved, and even a reduction in work hours has been realized. But such tangible victories have been difficult to achieve. In part, the circumstances which have set the stage for general strikes have been so severe that the other side has had a lot at stake, and has, therefore, been willing to put substantial resources into play. From the working class’s perspective, it has been the intangible gains which have been the most important. General strikes have been the birthplace of new labor organizations, new social and political movements, even new levels of consciousness, and they have provided the necessary foundation for new stages in working class advancement that were to come.

General strikes in U.S. history. Some highlights. Looking over our history, it is clear that there have been two kinds of situations which have given rise to general strikes: (1) depressions, in which employers seek to place the burden of hard times on workers; (2) post-war periods, in which employers seek to take back the gains that workers have made. You can find terrific accounts of some of these struggles in Jeremy Brecher, Strike! (South End Press, 1997) and George Lipsitz, Rainbow at Midnight: Labor and Culture in the 1940s (University of Illinois Press, 1994, especially Part Two: “Reconversion and General Strikes, 1945-1946”). One of the most interesting features of general strikes has been the extent to which, although they usually start out as “defensive,” as resistance to employer/government pressure on workers, they turn “offensive,” with workers seeking to improve their work and living situations, to expand their power, and to imagine a better world.

(1) The “Great Upheaval” in the summer of 1877, when railroad workers’ strikes against wage cuts spread from the east coast to Chicago and St. Louis, and entire communities joined in, challenging the power not only of railroads, but also of banks and manufacturing corporations and, ultimately, local and state governments. Only the force of federal troops, pulled out of the South at the end of Reconstruction, was able to defeat this series of general strikes.

(2) The May Day struggles of 1886, in which workers, skilled and unskilled, immigrant and native born, union and non-union, struck for a uniform 8 Hour Day for all workers. It was in this struggle that thousands of unskilled Polish steel mill laborers in Milwaukee joined with building trades and railroad workers to shut virtually every factory in the city. The Wisconsin militia, ordered by the governor to shoot, killed seven strikers on May 5, 1886. Elsewhere in the country, armed force was also used against strikers.

(3) The Pullman “Boycott” of 1894, in which on-the-road railroad workers provided solidarity for the shop workers who built sleeping cars. As in 1877 and 1886, the struggles of some workers inspired others to provide solidarity and join in the struggle (against wage cuts, against the corporate power manifested in company towns). Only the first ever federal injunction against a strike and lengthy prison sentences broke this strike, and, even then, it took weeks and months to do so.

And there were major general strikes in the 20th century –

(1) The Seattle General Strike in January 1919. In the wake of World War I, as the economy slowed down, employers sought to break the power and undermine the standards that unionized workers had gained during the war. In Seattle, they began with the shipyards workers. But, organized as the Metal Trades Council, these 35,000 workers gained the support of workers throughout the city, leading to a general strike. Some 60,000 workers left their jobs, organized through the Central Labor Union, and began to manage the city, from traffic flows to hospital deliveries, under their own control. In the aftermath of the strike, unions organized producers’ and consumer cooperatives which would last throughout the 1920s.

(2) The Minneapolis, San Francisco, and Toledo general strikes of 1934. In the midst of the Great Depression, workers in particular industries began to organize, using new forms, such as industrial unions, and new tactics, such as sitdown strikes and roving pickets. When employers dug in against them and pressured local governments to mobilize the police to break strikes, workers of all sorts, unemployed as well as employed, offered solidarity to the strikers and, quickly, began to organize themselves into new unions. Not only did most of the strikers win their immediate battles and gain union recognition, but the militancy they manifested pushed Congress to pass the National Labor Relations Act in 1935, providing a peaceful path to union recognition, with worker access to collective bargaining.

(3) In 1945-1946, the United States was wracked with strikes – industrywide strikes in auto, steel, meatpacking, coal mining, where workers and their unions fought to maintain the price controls of the wartime economy, and citywide strikes in Stamford, Connecticut, Lancaster, Pennsylvania, Rochester, NY, Pittsburgh, Houston, and Oakland, where workers, unions, and community organizations fought to protect workers’ rights to organize, collectively bargain, and, through politics, have an independent voice in their cities. Unions, with the support of community organizations, shut down not only manufacturing production and transportation, but also brought government activities to a halt. These struggles were ultimately defeated by red-baiting, the use of police and National Guard, and the offering of raises to some of the workers involved. Most importantly, employers and their government allies responded with the passage of the Taft-Hartley Act in 1947, which outlawed two key expressions of solidarity, the sympathy strike and the secondary boycott. In its wake, the labor movement slid into a period of prolonged decline.

Of course, the story does not end here. Workers in other countries have often used the general strike to advance our interests. In Ontario, Canada in the mid-1990’s workers fought back against government attacks very similar to those we are now facing in Wisconsin. Workers have a rich history of standing together when assaults upon their futures are most severe. With clear and specific demands, workers have been able to achieve those goals. The Walker administration’s assault on the Wisconsin that our grandparents, parents, and we have made shapes the fight we have ahead of us – for not only those who have come and fought before us but for those generations of us to come; for our kids and for our kid’s kids. Judging by the over 300,000 people who have been in the streets over the last three weeks, it is that rich “living history” in Wisconsin that those forces opposing us have underestimated. 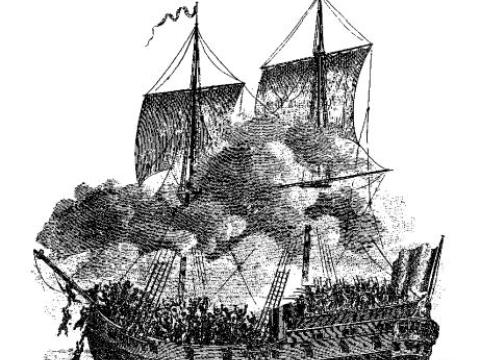 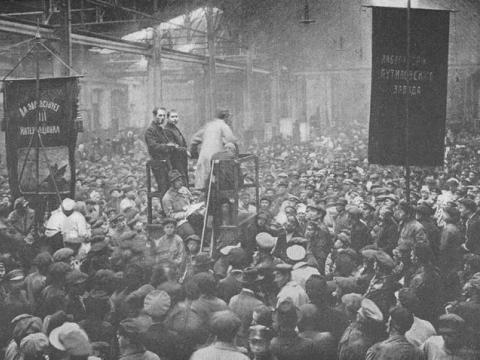 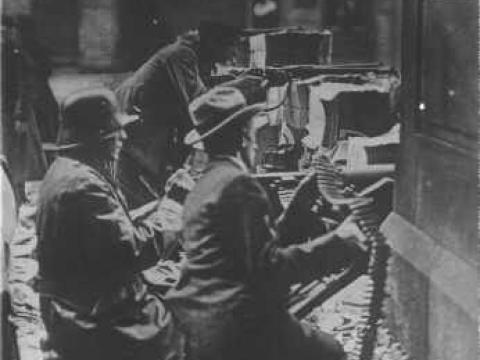 A survey of the main events and the limits of working class activity during the Revolution.