Marcos in the Library

A letter from Zapatista leader Subcomandante Marcos to a national Mexican magazine.

National Commission for Democracy in Mexico

Sirs: Here go some communiqués which indicate a change of direction in the winds. You are threatening us with unemployment again. I hope this time it’s serious. They tell me that Mr. Robledo Rincon [fraudulently elected PRI Governor of Chiapas] is huddled with his armed guards, self-named “state public security police,” in some place in the governor’s palace. Even though those who oppose the popular will are limited to four neighborhoods of the old capital of Chiapas, Tuxtla Gutierrez, a dignified exit can be offered them. They should just explain where the money came from to arm the white guards who assassinate indigenous people in the Chiapanecan countryside. Perhaps it is the money for the “peace agreements” of San Cristobal which never reached the poor of this state of the Mexican Southeast (we’re still called “Mexico”? No?).

Vale. Health and a peace of hope to foretell tomorrow.

From the mountains of the Mexican Southeast,

P.S. He remembers a previous morning and a cold interior. “One night of tanks, planes and helicopters, I was in the library of Aguascalientes. Alone, surrounded by books and a cold rain which forced the use of the ski mask, not to hide from anyone’s eyes, but to hide from the cold. I sat in one of the few chairs which was still intact, and contemplated the abandonment of the place. That dawn was, like others, empty of people. The Library began its complicated ceremony of exposition. The heavy bookcases began a movement much like a disorganized dance. The books changed places and the pages, and in the transfer one of them fell and exposed an undamaged page. I did not pick it up, moving dancing shelves in order to get near enough to read it.... The Library exists ab aeterno. From that truth whose immediate corollary is the eternal future of the world, no one can reasonably doubt. Humanity, the imperfect librarian, can be a work of luck or of malevolent demiurge; the universe with its elegant dosage of cupboards full of enigmatic tomes, indefatigable ladders for the traveler and latrine for the sedentary user, can only be a work of a god.. The imps affirm that the babble is normal in the Library and that the reasonable (even a humble and pure coherence) is almost a miraculous exception. The Library is limitless and temporary. If an eternal voyager traverses it in any direction, he would prove that at the end of the centuries the same volumes are repeated in the same disorder (which, once repeated, would be an order: an Order). My loneliness becomes joyful with that elegant hope. Leticia Alvarez de Toledo has observed that the vast Library is useless; rigorously, one would only need one volume, of common format, printed in nine or ten editions, which would consist of an infinite number of infinitely thin pages(...) ‘The handling of this silky briefcase will not be comfortable; each page attempts to unfold in other analogies; the inconceivable central page would not have an opposite side.’(—Jorge Luis Borges. THE LIBRARY OF BABEL, 1941.Mar de Plata). “My loneliness becomes joyful with that elegant hope,” I repeat as I slip away from the library. Aguascalientes is deserted. I am tempted to say “abandoned,” when a fox runs across towards the kitchen. I walk towards the cement platform and sit next to the palm of “hope that the flowers that die in other lands, live in this one.” The Library continues its metamorphosis. Noises, creaks, and imaginary laments escape through doors and windows. Did I say doors? It has two holes which are impossible to define. There is that which allows one to enter, which some say is an exit, others argue that the Library breathes through them, the least of them suspect that they are for gulping people, animals,and hopes.. The Library of Aguascalientes is the beginning and the end of the spiral and it does not have a defined entrance nor exit. I mean to say that in the gigantic spiral which Tacho described in order to explain the architectural origin of Aguascalientes, the Library is in the beginning and the end. The safe-house which “kept the greatest secrets of the organization,” is at the other end and beginning of the whirl. I run my eyes over the gigantic spiral in which the construction is aligned and I imagine that from a special satellite one can appreciate the spiral which “calls from the jungle.” My gaze runs from the safe-house to the Library, which now gives out a phosphorescent blue and a continuous, hoarse noise. The Library tells what can be thought, and by day, is inhabited by children. They don’t come there because of the books. They say, according to what Eva told me, that there are multi-colored balloons there. Apparently no one finds them, because the children end up painting color pictures. Lately, helicopters and planes are abundant, not just in the skies of Aguas-calientes, but also in the flat pictures of the children. The purple, reds and greens are much too abundant in the pictures for my liking. Yellow seems to limit itself to the sun which, these days, is covered by the grey of the sky. At night, the Library shelters and agitates transgressors of the law and professionals of violence (like the one who writes this). They gaze at the shelves filled with books looking for something which is missing, and which they’re sure was once there. The Library was the only thing, in all Aguascalientes, considered the property of the Democratic National Convention, and it sometimes has books. The caravaneers made efforts to give it electricity, bookshelves, books, tables, chairs and an old computer which has the virtue of never being used. The rest of Aguascalientes has remained abandoned since that 9th day of August 1994. Every once in a while, Mister, Bruce, and Saqueo will make an effort to sew the canvas for the parties, which are less every time. Now the Library remains in silence, the phosphorescence is concentrated in one point, in its center, and it turns emerald green. I move carefully to one of the windows. The green light was blinding and it took some time to get used to looking at it. In it I saw.. All of a sudden, the blue sails of Aguascalientes caught a favorable wind. I turned toward the command post but it remained empty. The sea thrust its waves against the keel and the creaking of the chains of the anchor could be heard above the wind. I climbed on starboard and took the rudder in order to free it from the labyrinth of the spiral. Was it leaving or arriving? The emerald of the library went out.”

P.S. THAT HE REPEAT WHAT WAS TOLD TO HIM FROM THE LANDS OF ZAPATA: “Cruelty in Uaymil-Chetumal...Ten years after Alonso Davila was flung out from Villa Real de Chetumal, the rash Francisco de Montejo again considered the conquest of the province of Uaymil-Chetumal (1543-1545). He commissioned Gaspar Pacheco, his son Melchor and 30 soldiers for this action. Thus they began the desolate war of Uaymil-Chetumal. “The Mayas” said a report of the era “as much men as women, were killed with clubs, or thrown into the lakes with weights tied on their feet so they would drown. Savage dogs used in the war tore them to pieces, these defenseless indians. The Spanish considered them animals and they dragged and beat them like vile animals. It is said that the Pachecos cut the hands, the ears and noses of many indians.” As you can see the bad government began many years ago and its methods are somewhat passé...” I, meanwhile, look worriedly at the “prominent nose,” now red and cold, because of what they write about “cutting their noses” Greetings to the pipe of Popocatepetl, and always remember that...”In Popocatepetl aic ixpolihuiz, in mexicayotl aic ixpolihuiz, Zapata nemi iyihtic tepetl, iyihtic macehuiltin.”

(Look: it is nahuatl). Vale once again.

The Supmarine from the high seas. [Subcomandante Marcos] 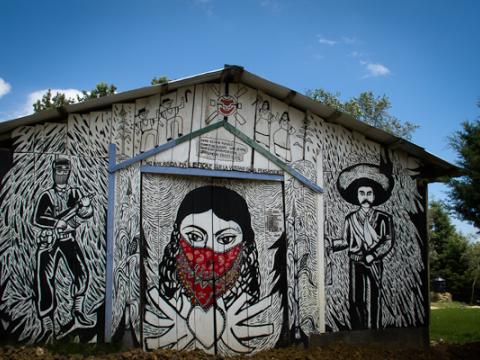 Strategies for resistance under neoliberalism: lessons from the Zapatistas and the Landless Workers' Movement 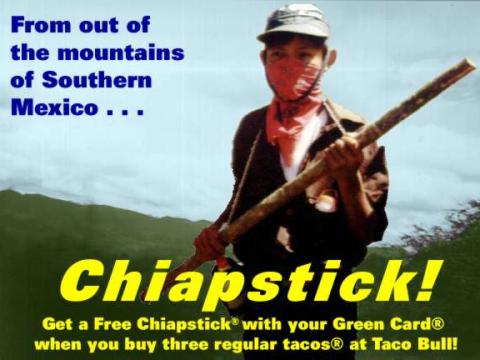 The Faceless Face of the New Mexican Revolution

Chris Carlsson analyses the EZLN and the role of their leader, Marcos, for Processed World magazine.

John Ross writes for Processed World on the environmental views of the Zapatistas.

Autonomist Marxist, Harry Cleaver, analyses the Zapatista uprising in Chiapas and its relevence to class struggle in the era of globalisation.